Adding combined footage to points from the beginning of a line

An example would be three points total with 50 ft between them. The first point would be 0, the second point 50 and the third point 100 (that's just an example). Is there a way to do this?

I was going to break the line into segments based of vertexes to get the individual length of each segment. How would I have it add going down the line and add that combined footage to each point? I have arc 10.1, but am open to any solution/ideas.

In ArcGIS, you can you the linear referencing tools for this. create one fields with the length in feet, and use this fields to create routes. Then you can use locate feature along route to extract the footage of each point.

If you only want to do the job and it is not important to use just QGIS or arcgis, OpenJUMP 1.7.0 Plus has linear referencing tool which is very simple to use.

Fill in the parameters 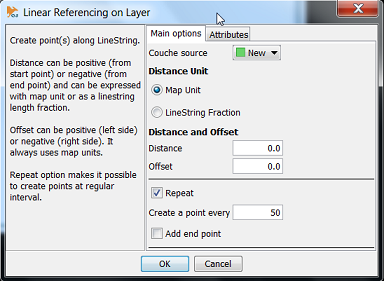 Result is a point layer with distances as an attribute 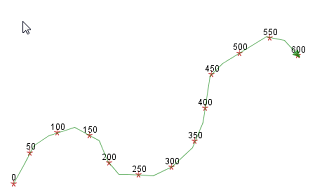 If 'open to any solution/ideas', then you can also do it using postGIS database and window functions. If you're interested in this solution please comment my answer so I could prepare few queries for you.

13
Partitioning Line into Segments using ArcGIS Desktop?
3
How to style the end of a line?
4
Calculating the fractal dimension of a line segment
2
Script to convert line segments to equally spaced points based the duration between points as specified in another field
2
How to add points to line at every polygon/polyline intersection and have attribute table including distance of new line sements
0
Splitting a line into multi-line at desired points in arcgis 10.1
4
Join a set of sequential points with individual line segments QGIS