Calculating slope in percentage with QGIS

I'm working with QGIS, v. 2.0.1. I have several soil types. They are (amongst others) described with slope indications. I already calculated the slope from the DTM in degrees, but as description of the soil types is in percentage, I need to calculate the slope in percentage.

Maybe I need to say that the terrain is pretty plain. What else can I do?

I tried the raster calculator and did what @radouxju suggested. It gave me a black picture with values from 1756.64 to 1756.64. But as soon as I click in the picture the values are "normal", say 5.88 or 13.224 or something like that. The same happens when I try the gdaldem tool but with values from 0 to 0. I also tried to change the contrast enhancement (like stretch to min/max) but it didn't change anything.

Use the gdaldem tool http://www.gdal.org/gdaldem.html as

From the manual page: "-p : if specified, the slope will be expressed as percent slope. Otherwise, it is expressed as degrees " 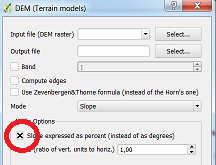 Some other things to notice:

There are a couple of ways to get a slope raster with units in percent. In addition to the 1st answer below by user30184, you can also choose the GRASS module r.slope.aspect which calculates several geo-morphological layers, including slope, and you can choose to output either in degrees or percent. It's under in Processing menu, under GRASS -> raster. But I think you need to first check your "pretty plain" DTM. What is the resolution? Check some cell values and be sure you have a slope at all.

6
How to perform a slope analysis in QGIS?
8
How to extract slope from topographic raster map?
3
Creating slope map from DEM using QGIS?
2
Removing contour artifacts from low slope regions
1
Calculating slope between 5 and 10 percent using raster calculator of QGIS?