I have two large layers that I want to do intersect operations. One is municipalities and the other is landuse. Right now, the landuse layer is of MultiPolygon type that is, for the entire state, I have only one entry in the table with the class "Forest", but composed of several small polygons.

If I wanted to find all the forest areas in my city, what would be more efficient in PostGIS:

This is more or less what I'm trying yo get. I want the light green polygons.

Does it matter it the forest polygons (F) are stored as multipolygons or singlepolygons?

I'm going to be processing a very large dataset (Amazon) 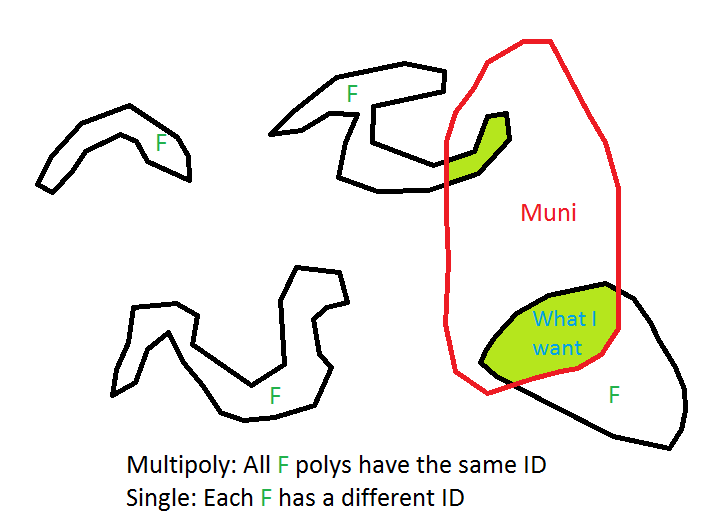 You are right that dumping the multipolygons to polygons makes the index more efficient, for the reason you mention.

So if the size of the dataset makes performance an issue you should:

From your description, a query of landuse='forest' that intersects your municipality will return the one record in your landuse table. And that should be pretty efficient. But it seems like you're really looking for which of the pieces of the forest multipolygon intersect with your municipality polygon(s), so you need to break that into distinct pieces. No need to create a new table, though - use ST_Dump() in your query to do this on the fly, and it should be pretty fast. Like:

2
Find a point in a multipolygon geometry

5
How can I check if a multipolygon can be represented as a simple polygon?
2
What is faster for geoprocessing (intersect) big shapefiles?
4
Export polygon in geojson as multipolygon
1
Why does QGIS only intersect one part of the layer?
3
ArcGIS find all polygons that intersect with more that one polygon from another layer
3
How to intersect two polygon-layers in PostgreSQL/PostGIS?
1
Correct shapefile for Montenegro municipalities?
9
Identifying polygons that intersect with another layer using QGIS
4
Simplifying a multipolygon into one polygon respecting its outer boundaries