Publishing map services in GeoServer like ArcGIS for Server does?

I was working with arcgis platform, but now I am working with geoserver for a project. Argis server publishes the MapServers and FeatureLayers under mapservers. For exapmle: Sample Demographic MapService is like this, 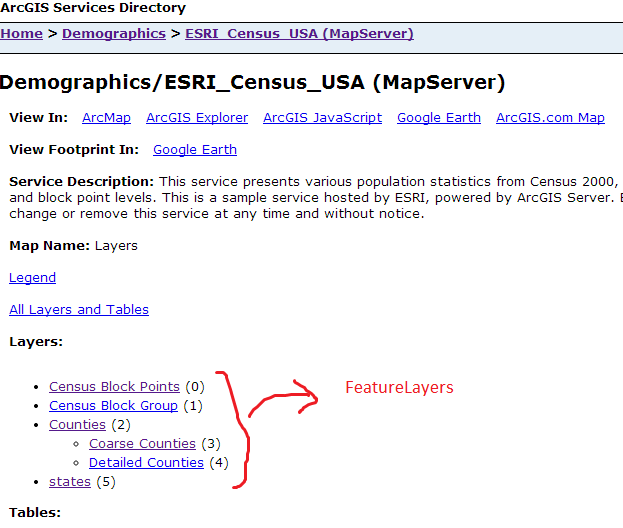 Can I publish map services in geoserver like this?

You can't publish services exactly like that in GeoServer - the ArcGIS Server Feature Layer is Esri's proprietary implementation for sending vectors to the client.

If you're using GeoServer then as @user30184 noted you should look at a Web Feature Service to emulate the Esri Feature Layer.

The advantage of using ArcGIS Server's feature layer is that is has been built specifically by Esri, for seamless use within Esri's own APIs and other infrastructure. For example, you can create a FeatureLayer in the ArcGIS Server JS API, or edit the Feature Layer in an ArcMap session. The disadvantage is that you're locked into the Esri platform.

The advantage of the open standards like WMS and WFS is that you aren't locked into any particular vendor or platform. The disadvantage is that you may not get the full functionality of the ArcGIS Server Feature Layer.

You can publish database tables with GeoServer as WMS and WFS layers. WMS renders ready made maps like this for clients:

WFS service sends vector data in GML format and result is like this:

AcrGIS servers can also do WMS and WFS, and services produced with Geoserver can be used with Arcgis clients. That's the idea behind standards.

Not the answer you're looking for? Browse other questions tagged geoserver wms or ask your own question.

2
How to access map service from GeoServer and can we use that service in ArcGIS API?
8
geoserver support to proxy other tiling services?
2
Publish a Leaflet map with vector overlay on a WMS server (e.g. GeoServer)
0
How can I access individual layer in Geoserver similar to the arcgis rest-end urls?
3
Geoserver Services not available after restart
3
How to publish SQL Server Spatial views to GeoServer?
0
Publishing tables from lots of different databases on GeoServer?
2
Geoserver JDBC User Group Services Problem
2
How to access geoserver web services on a backend server through openlayers web application hosted on another server via IIS?