I am new to GIS and GPS. I am going to make a digital elevation model of my school's campus using a trimble gps unit. I know the accuracy is not the best but it is just for a school project.

My question is how exactly should I go about doing this? I went out in the field today and acquired a bunch of position points which have elevation (I set the gps to log my position every second). I made that trimble data file into a .shp file and put that into arcmap. I can view all of the points and the elevation in the attribute table.

How to I make a digital elevation model from this data? I tried doing raster interpolation like kriging and IDW but I am not really sure what I am doing. What is a TIN? I looked TIN up and apparently it uses Vector data? Shouldn't I just use my vector data?

I would take a step back and ask is my GPS capable of making a DEM. The answer to this question for most consumer grade units is unfortunately no, well not without quite some work before you start interpolating etc.

The vertical error in GPS can be very large even with modern units. What you are measuring is also an issue, see below.

"A brief examination of elevation readings for Esri headquarters in Redlands, California, demonstrates these differences. The campus elevation is shown on topographic quadrangle maps and high-resolution digital elevation models (DEMs) for the area as approximately 400 meters above MSL. However, a precise, nonadjusted GPS reading for the same location typically shows the elevation as 368 meters. Why is there a 32-meter difference? The GPS receiver uses a theoretical sea level estimated by a World Geodetic System (WGS84) ellipsoid, which does not perfectly follow the theoretical MSL. The MSL, approximated by an ellipsoid, is related to gravity or the center of mass of the earth. Discrepancies between a WGS84 ellipsoid, and the geoid vary with location. To continue with this example, elevation readings for Yucaipa, a city located less than 10 miles east of Redlands, differ by 31.5 meters."

The full reading is at http://www.esri.com/news/arcuser/0703/geoid1of3.html

Do not let this deter you though, you can still make a DEM but examine your VDOP readings, reject high readings and make adjustments for known differences. Maybe find a local survey marker that has a known elevation and test your GPS against this point.

starting from points to build a continuous surface is called spatial interpolation. You can find information about those methods on the Web. Surfaces can be represented using wo different models : raster or TIN. Most existing DEMs use the raster model, but TIN is sometimes a good alternative. As its names says, TIN are composed of irregular triangles, therefore it will adapt very well to irregularly located points. It is also an optimised model, so that you have only one possible result when you create a TIN from points. For the other methods that you mention, you should ideally adjust some parameters to find out the best results.

From the ArcGIS point of view, TIN needs a 3D analyst licence and the other method need a spatial analyst (basic parameter adjustment) or geostatistical (advanced parameter adjustment+ more advanced models) extension. Kriging is the best linear interpolation method by construction, but you need some expertise to use it correctly. For quick and good results, I would rather suggest Topo to raster.

Your question is far too broad to cover in the GIS.SE Q&A format. It sounds like you're at square one with little to no previous knowledge or experience. This is fine, everyone has to start somewhere. But if you really want to learn the proper methodolgy, you're going to need to do some research into all the various steps, even just to get an overview of the process - let alone the finer points.

Before you go out to collect data, you need to understand a few things about designing sample collection. There are some great tutorials out there about how to do topograpic surveys of a piece of ground. The old way to do it is called differential leveling, but even those tutorials have instructions on how to lay out survey points. You would just be GPSing those points rather than using a transit on them.

For topography, setting up a reasonably regular grid of points, and then collecting a few more at outliers (like a low spot around a drain inlet, the high point of a hill, or along the bottom of a swale) should get you fairly decent data to work with. Just walking around randomly to collect points isn't going to produce a very good surface.

As mentioned in my comment above, you need to be careful with the unit you have and how you use it. If you have a true survey instrument, it has a pole and you should use it - only collect points with the pole on the ground. If you don't have one, just attach the gps to a walking stick or something so you're always reading at the same height. Of course, if using a consumer grade unit (or method, ie no base station), the unit accuracy isn't going to be great in the vertical to begin with. A less accurate consumer unit might be better off with a larger area that has greater variation than say a small field or quad that might have a ten foot or less elevation range.

For that matter, GPS readings can vary quite a bit - if you really want some consistent data, you need to record several readings at the same point, and average them together (some units do this as an optional, built-in function of collecting a point).

Once you have the points, you then create the surface from them either by raster interpolation or creating a TIN. There are several ways and formats of doing this in ArcGIS. For education, I'd recommend trying them all because they don't take very long. Fiddle around with each method. See why spline may or may not be better than kriging or IDW. Play with the input settings such as search radius, cell size, and weighting. Generate contour lines from your points, not just a surface. Make both a raster DEM and a TIN. Note the differences in format, what they look like, and how they behave. Which one processes/views faster. There are different tools that produce the same type of output in different ways. Try them all, compare the results.

I created the below maps/observations from a set of points in less than an hour, and that was including running each method a few times with varying settings to look at their influence on the output. 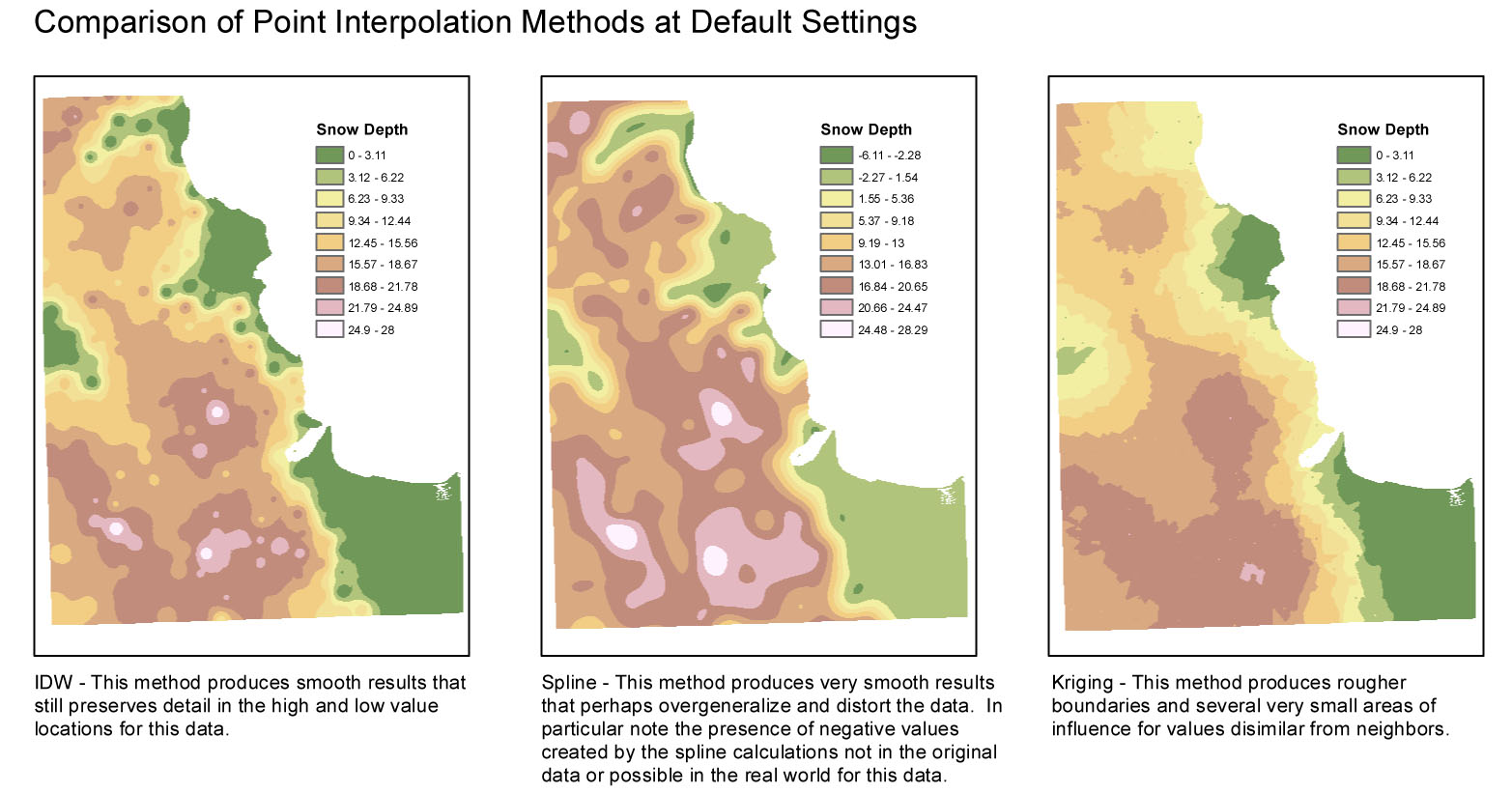 If you get stuck on a particular step, come back and ask a specific question. But have fun - I do this sort of thing both for work and entertainment.

Not the answer you're looking for? Browse other questions tagged arcgis-desktop arcgis-10.1 dem tin trimble or ask your own question.

3
Interpolating contour lines from TIN-model vs Grid in ArcGIS Desktop
1
Interpolation outside the contour of a set of points
1
Predicting in advance which is the best interpolation method for my data
4
Querying Elevation Data in Postgis
6
How to calculate kriging weights?
4
Reduce artifacts/errors in DEM