At least as I see it, I am trying to do the most basic of point density analyses. I'm just simply trying to count up how many points are in that box! I'm using a reference raster of 15 arcseconds. My point density dialogue is as below. Note that I've tried it two different ways with very similar results. Any suggestions of where I'm going wrong? I'm guessing it has to do with my search radius, but how do I tell Arc I want my search radius to be the same as the pixel? 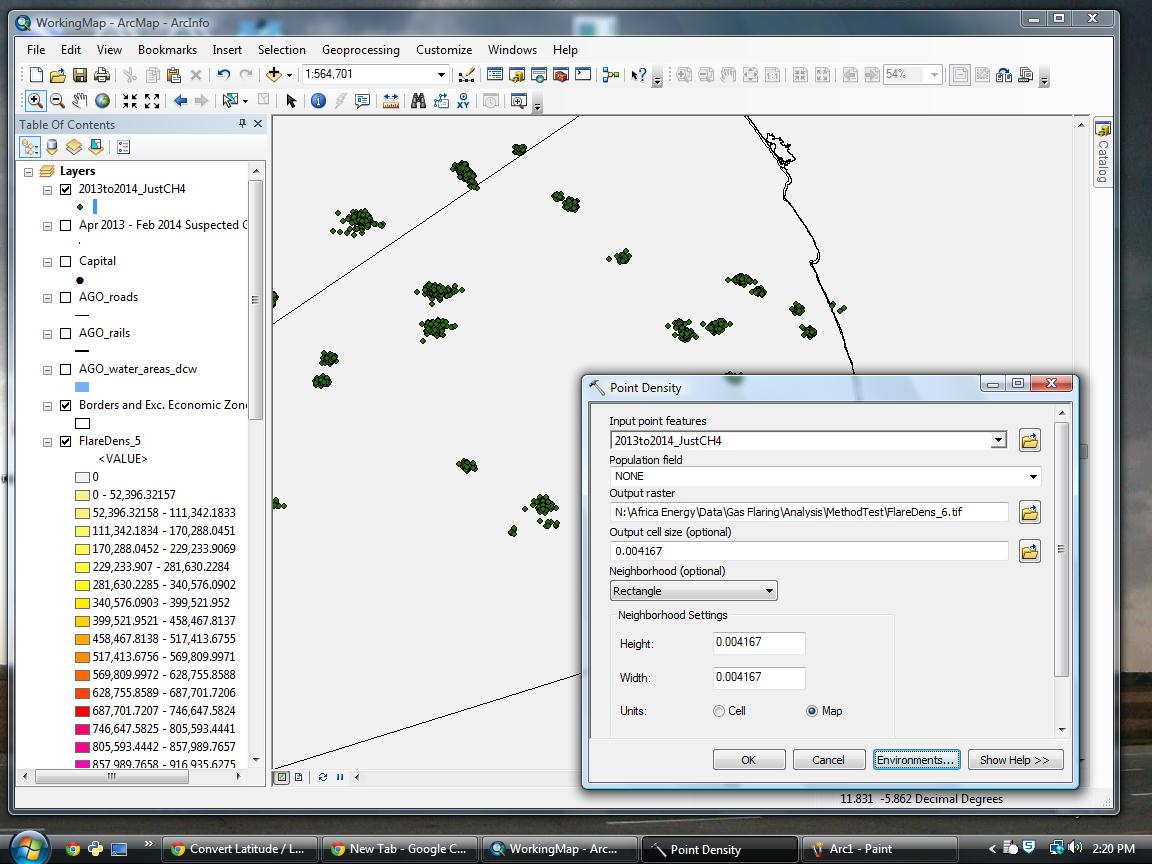 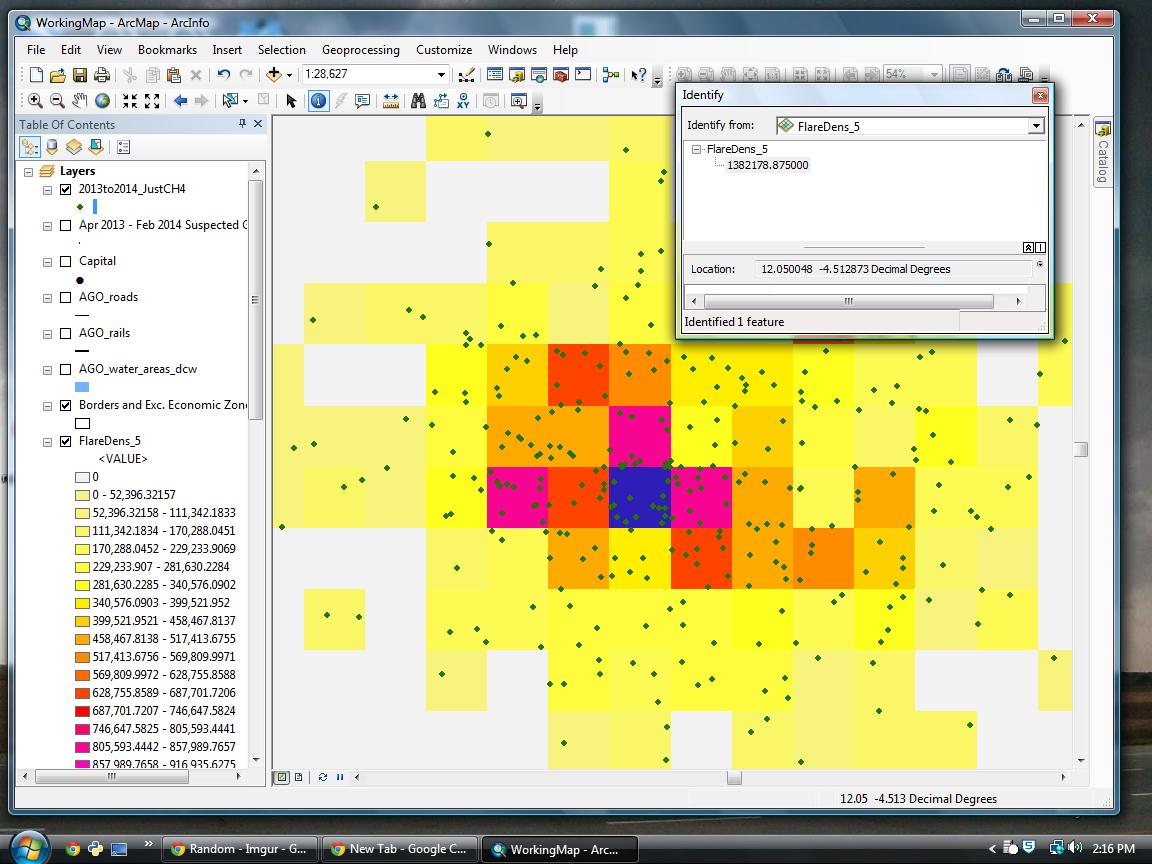 Sounds like a projection issue to me. Your data and analysis is being performed in decimal degrees - implying a geographic coordinate system. And yes, your map units are decimal degrees as evidenced by your screenshots. This is part of the problem. Generally in order to do calcuations related to area and length you want to be in a projected coordinate system, which is why I suggest a UTM zone projection using meters.

The area units I refer to in my comment is in the Point Density tool - last parameter which your question doesn't mention and screenshot doesn't show (you need to scroll down or make the dialog box bigger). That controls the unit values of your output raster and performs the unit conversion for the density units - ie your data could be in meters but you could set that to square feet and your output raster units would be density/sf.

The key here is that cell size units and density value units are independent of each other. You can have a one kilometer square area (cell) where the density of gas flares is 0.345 per square foot. You could also have a one foot square cell where the density is 300 per square kilometer. In your case, your cell is a fraction of a square degree. The default area unit would be one square degree. Therefore 18 points in your cell translates to a density of x per some small fraction of a degree, times whatever it takes to get a full square degree (extrapolating out to the chosen/default area unit), equals the extreme values you're seeing. You could set the area unit to square feet or something, but since there's no direct, uniform conversion between a degree and a foot, you still may not get accurate results - which is why it's best to project your data first.

The search radius just controls how far out from a given cell to look for points to count toward the density. You've already taken care of setting it to one cell in the Neighborhood section of the dialog box. The issue isn't that the tool is going beyond your cell to count points, it's a unit conversion/magnitude problem.

Long story short: project your data (something like UTM zone as appropriate to your area) before running Point Density.

The problem with the projections others have suggested is that you'll be unable to divide the spherical surface of the Earth into equally-sized cells using a rectangular grid. A discrete global grid would be most appropriate here as it will generate a grid of equally-sized, hexagonal cells.

I don't think Arc has the capability to do such things, but my package dggridR makes it easy enough if you have access to R: 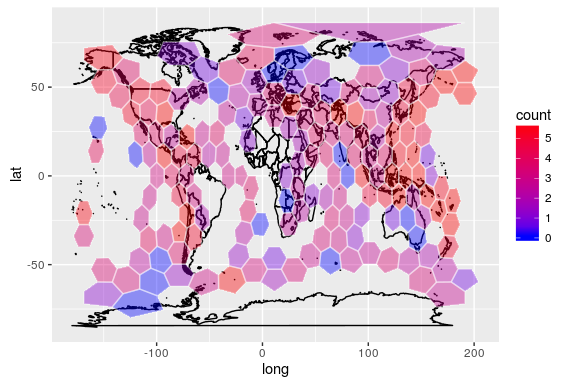 The cells do not appear to be of equal size because of the distortion imposed by the projection. The method others have suggested is to do such a projection and lay a rectalinear grid on top of it. From the image above, it should be obvious what a bad idea that can be. Choosing projections carefully and working in limited geographical areas reduces this error, but only so much.

If we reproject the same data onto a sphere, it is obvious that the cells are of equal size, as desired: 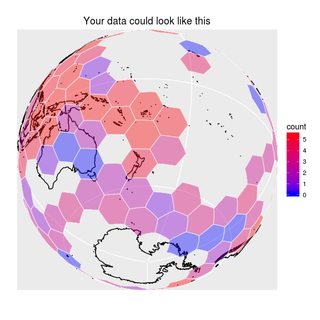 Naturally, you could choose a finer grid as appropriate for your data set.

Not the answer you're looking for? Browse other questions tagged arcgis-desktop arcmap point density or ask your own question.