E.g. are there any QGIS plugins which could be used for this task?

OK, so step 1 (getting the outline of all of them) is nice and easy. All you need is to go in QGIS to

Which will open the dialog for the "Dissolve" tool.

Set your layer as the "Input Vector Layer", select a "Dissolve Field" that is the same for all of the features in the layer (I chose "tesellate"), create a location for the output shapefile, and tick "add result to canvas" like this... 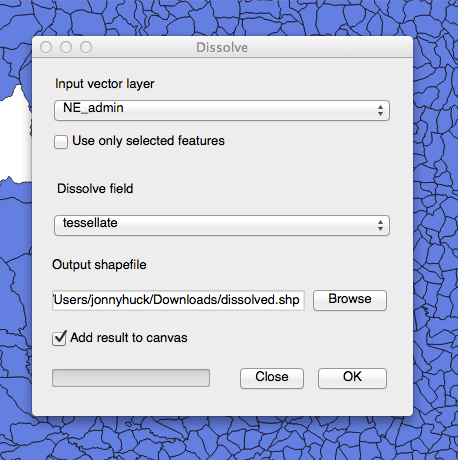 Press "OK" and it will dissolve all of your features into one big one: 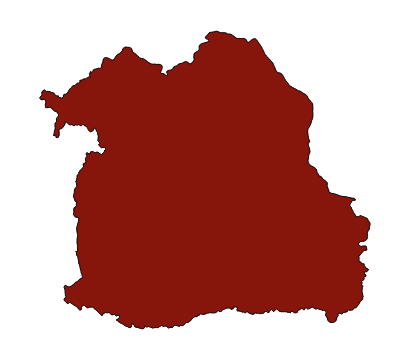 Next, simply convert it to a KML/KMZ by right clicking on it in the "Layers" list (normally on the left of the screen), click "Save As", and set the format to "KML".

I'm afraid that splitting each feature to separate KML layers is a little more complex, and will require some scripting...

I recommend downloading the "Script Runner" plugin, and then run this code:

All you need to do first is add in your input file (instead of "[PATH TO YOUR DATA]") path and output directory (instead of "[OUTPUT DIRECTORY PATH]"), then save the file as a Python (.py) file somewhere. Then open the Script Runner plugin, load in the file (by pressing the "+" button) and press "Run Script".

This will separate every feature in your dataset (>2678 of them!) into a separate KML file. They will all be numbered, as my computer can't handle the encoding of the names, but I've left the code in there if you want to use names instead. Just swap the # from the line that starts "outfile" to the line below (also starting "outfile").

You can run this again and again for each of your datasets.

Use the split vector layers tool, which

Creates a set of vectors in an output folder based on an input layer and an attribute. The output folder will contain as many layers as the unique values found in the desired field.

Not the answer you're looking for? Browse other questions tagged qgis kml or ask your own question.

2
Find and list all polygons that overlap with another polygon
1
Simple Spatial Join of Point Feature to Polygon Target Feature Not So Simple (Source Files Included)
0
check if the district belongs to the province
13
shp2kml license expired, looking for free solution
0
Efficiently dividing KML file by area, while using ogr2ogr?
3
Converting KML to TAB while maintaining the path to and name of embedded image
3
Pyshp draws polygons out of order after intersection of two shapefiles
0
Processing a large number of raster files in QGIS
4
Finding combinations of polygons in PostGIS
3
Open many KML files in QGIS?