Choosing projected coordinate system for mapping all US states?

I'm on a project requires integrating data for all states in the US. It means I have two roadway datasets and I'm going to assign the attributes of roadways in one dataset to the same roadways in the other dataset (similar to spatial join). Each state is an independent shapefile and I need to merge them all at the end to generate the final product.

I'm wondering which projected coordinate system should I use in this case? Or it doesn't matter at all since it won't affect the result of geoprocessing? For my past work, I only mapped small area so I chose state plane NAD 83 of specific area as projected system.

There are some free applications that let you try and play with projections.

They also indicate to what extend they preserve size, shape or direction. Depending on you application a different priority might be set. For instance if I had to map an areal phenomenon like e.g. certain species habitat zones I'd prefer a projection that preserves size. There are projections that make a good compromise of all three aspects.

For mapping the whole US or North America in general Albers Equal Area Conic or Lamberts Conformal Conic are a good choice for most applications.

Indiemapper says about these projections:

Albers Equal Area Conic (Heinrich Albers, 1805): Like Lambert Conformal Conic, this is a very popular map projection for the US, Canada and other continental/large countries with a primarily E-W extent. Used by the USGS for maps showing the conterminous United States (48 states) or large areas of the United States. Used for many thematic maps, especially choropleth and dot density maps.

Map is not conformal, perspective, or equidistant. 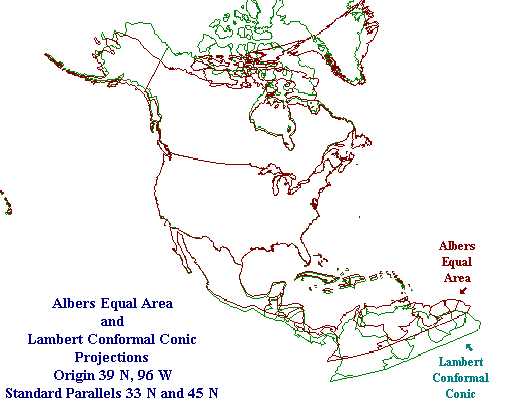 2
which projection for preserving distances in USA (all 50 states)?
20
Which projection is best for mapping the contiguous United States?
1
Regional Large Scale Map Projection Choice