I have written some code which offset a certain latitude and longitude with a distance in centimeters. What I am trying to do is based on a coordinate and a vector create two new points along the line described by the vector.

I believe I have succeeded in doing this but the results I am getting are a bit odd. I am not very experienced with map coordinates and projections so I am posting here to see if my results 'look' right.

The following link shows an image I have of two lines: 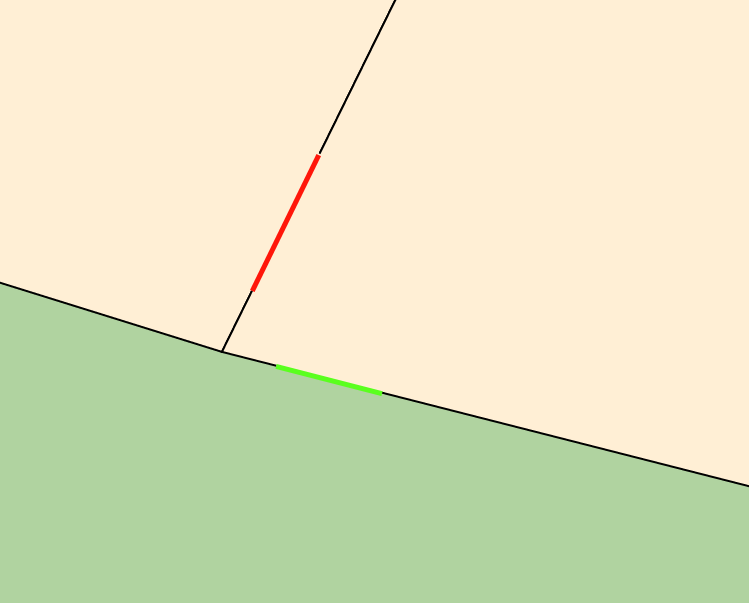 The lines are located around longitude 6.080695759673799 and latitude 52.501029191616425 (The Netherlands). I know with the projection I am using (Web Mercator I believe) landmasses become stretched along the poles. Is this what I am seeing with the red line? Is the red line stretched because we are closer to the poles than we are at the equator?

I use a combination of two functions to offset the latitude and longitude. I found the code in this forum post: https://sharpmap.codeplex.com/discussions/395118 I've then rewritten the code to Javascript like this:

To offset the point I do this:

After the last function call latLong should contain the new coordinate.

Web Mercator has only real metres as units close to the equator. The more to the poles you come, the more x and y distances get apart.

You should better use a "good" projection like the UTM zone of your area if you want to see the lines in correct length.

Not the answer you're looking for? Browse other questions tagged coordinate-system latitude-longitude mercator or ask your own question.