I'm relatively new to GIS, so I hope my asking doesn't appear to be ignorant in any way.

I currently work on an offline map service solution for usage in areas without internet connection. For that purpose I want to download the data from a provider (i.e. geofabrik.de), load it into a PostGIS enabled database by using osm2pgsql, process the data with Mapnik and store the rendered tiles on the local machine. The map data doesn't need to be up-to-date but should be able to get updated once or twice a year.

From there, Leaflet will be used to display the rendered tiles and also satellite tiles if possible, as a slippy map. The map user should also be able to edit data on the map and to save them as vector layer to the database. 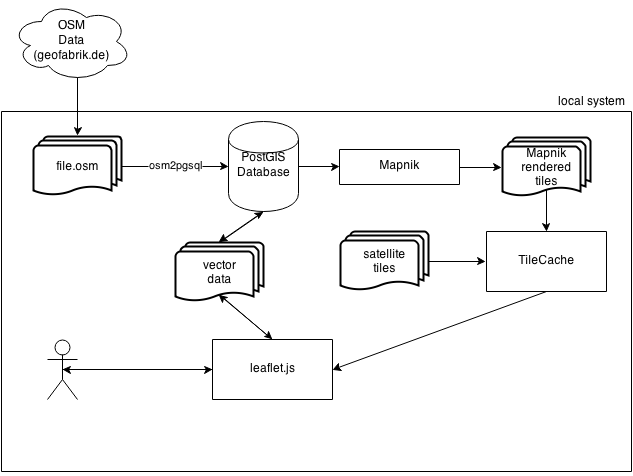 I already did something similar by using Geoserver, GeoWebCache and OpenLayers but I'd like to have at least two approaches for comparison.

Thanks for investing time in this!

Your approach looks ok to me. On my local system, I skipped the TileCache part. Mapnik fills the folders in the way Openlayers reads them from disk using file:///... I don't know if leaflet can do it the same way.

For the satellite tiles: You have no chance to get them legally. Google and bing do not like storing their tiles locally. If you have mapnik-rendered tiles form OSM, they will be not transparent, so you will not see the satellite picture underneath.

If performance is an issue, you can render on a faster machine, and copy the tiles to slower ones for the end user.

I have not tried storing data back into the database.

For the satellite tiles, you could render them yourself using Mapnik. Landsat and NAIP are two sources of free satellite raster data.

edit: I've also just come across a growing dataset (also free) of High Resolution Orthoimagery, which I've never used, but is much higher detail than the other two sources.

Depending on how confident you are with technical setups, rather than running local GeoServers, you could use something like TileMill to generate MBTiles files of all your images, or just the images using Invar. This can then be show by simple python code like TileStache. This would be a much lighter weight setup.

Not the answer you're looking for? Browse other questions tagged postgis openstreetmap leaflet mapnik offline or ask your own question.

9
OpenLayers with my own OSM data server
7
How to set up an OSM server with TileCache and Mapnik?
6
Leaflet offline tiles problem
1
Styling map and generating tiles for Mapnik and/or GeoServer?
2
Offline Map with mapnik: Tiles are vertically unaligned and randomly displayed (Leaflet + Tilecache + Mapnik + Postgis)
0
Render all roads with an equal width in Mapnik
6
Custom tile server - how to create a layer using Mapnik and mod_tile using POSTGIS db
3
How to create a map to PNG file with specific box coordinates by Mapnik?