How to compare polylines attribute from the same GRID cell in ArcGIS 10?

I need some help because I do not know how to model this issue:

I have two polyline shapefiles. They have an attribute that I need to be compared. These are roads from different sources. So, I have their names and attributes.

My intention is to make this comparison within each GRID cell, so, I created a GRID with the fishnet tool, and then "Intersected" each polyline with the GRID, I have something like this: 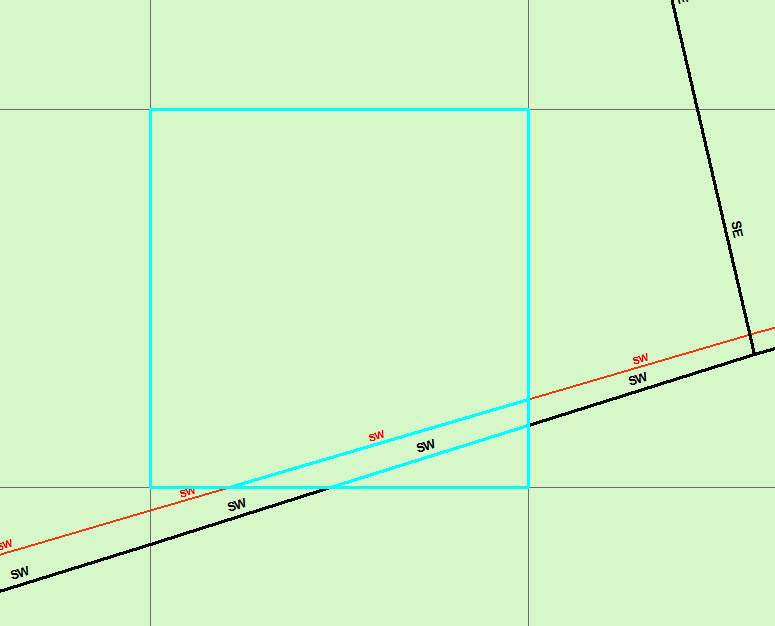 BUT, I think that it is important to use the "NAME" attribute, for a better comparison between elements with same name. I should need to distinguish polylines, like this example: 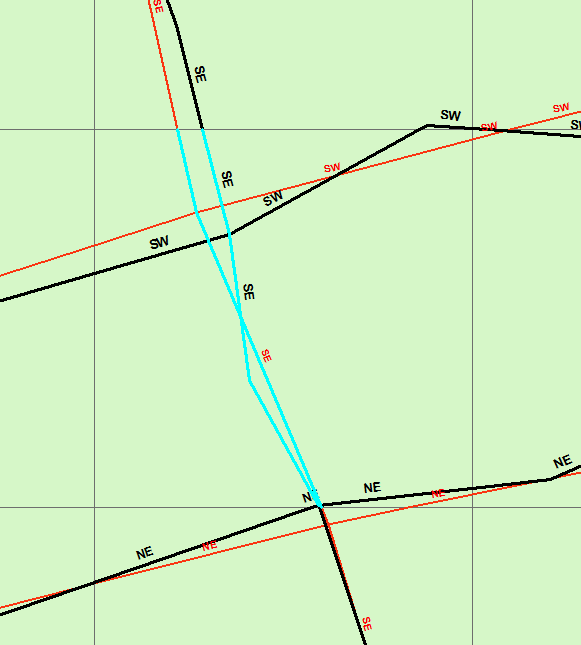 For example, If it compares the SE attribute with the one that crosses (it has SW), it gives me something wrong.

Maybe, another possibility is taking into account their bearing, or something related with its angle, because it happens to be, in most cases parallels.

Sorry, but I'm a bit lost. I think it is something tricky, but I hope there is a possible methodology for this purpose. Any ideas?

I'm thinking about the bearing question. This is my idea:

Count the number of Black features contained into the cell. "var counter"

Take value of the QUESTIONED attribute (for example NE);

take (in another var) the red questioned attribute (for example NE); IF var1 == var2 THEN write "SAME" into a String field from Red geo. ELSE IF Write "ERROR" into the same string field.

I have never implemented such a pseudocode, any help for this? maybe is a good starting...

Anyone would adventure in that?

You may use the Minimum Bounding Geometry tool/method to get feature orientation, which may then be joined back with the polyline layer(s). After that you could use either Field Calculator or Calculate Field method to write a custom python or vbs function for generating the comparison result, see function examples from the link below.

Not the answer you're looking for? Browse other questions tagged arcgis-desktop arcgis-10.0 line comparison vector-grid or ask your own question.

1
Converting Direction Of Travel OSM vectors from “system” to another?

4
How can all polylines within a polygon be selected and then operated on to determine the average value from an attribute field?
3
How to discretise a line into grid lines
1
How to use a polygon grid to calculate statistics on line and point features
1
Coloring lines with polygon grid using ArcGIS for Desktop?
5
Adding attribute features from the intersection of a grid with a point shapefile?
1
Get a raster composed of 0s and 1s
2
Calculate cell distance between cells
2
Selecting points within fishnet grid cell with criteria of at least 3 unique values using ArcGIS Desktop?
1
Check if two different class points fall within the same cell of a grid?