Does the NED use geocentric or geodetic latitude?

What kind of latitude does the National Elevation Dataset (NED) use? Geocentric or geodetic or something else? I can't find the information anywhere on their site (http://ned.usgs.gov/index.html) or in the documentation that comes with the data I downloaded.

I'm new to GIS. If latitude type is unspecified, is there a standard default assumption?

One could use either kind of latitude to locate points on the WGS 84 ellipsoid (used by the NED) or any other ellipsoid, but "everybody knows" that the values will always be given as geodetic latitudes. However, it is surprisingly hard to find an authoritative statement to that effect!

Before we go on, it helps to understand that although a datum like the WGS 84 ellipsoid describes a reference surface to locate everything on, above, and within the Earth, it is compatible with many different ways to associate coordinates with the geometric points on that ellipsoid. Two of those ways are the geocentric and geodetic systems.

The two angles are the same only when the point is located over the Equator (when they equal zero) or over one of the poles (when they equal -90 or +90 degrees). Otherwise the points denoted by the same numerical values of latitude and longitude can differ by as much as several tens of kilometers in the two systems (as I recall--I haven't rechecked that figure recently).

Both types of latitude can in principle be used, even though WGS 84 is referred to as a "geodetic" datum. (Indeed, both of them, as well as a "reduced latitude," are used in the governing NIMA technical report TR8350.2, available at http://earth-info.nga.mil/GandG/publications/tr8350.2/wgs84fin.pdf. See p. 4-4 and section 5.2 (on Gravity Potential) et seq.)

In the recent article Using NHDPlus as the Land Base for the Noah-distributed Model (David, Maidment, et al., Transactions in GIS 2009; 13(4): 363-377) a group of GIS luminaries writes

To distinguish between a spherical and spheroidal Earth, two types of latitudes are needed: geocentric and geodetic as shown in Figure 4. 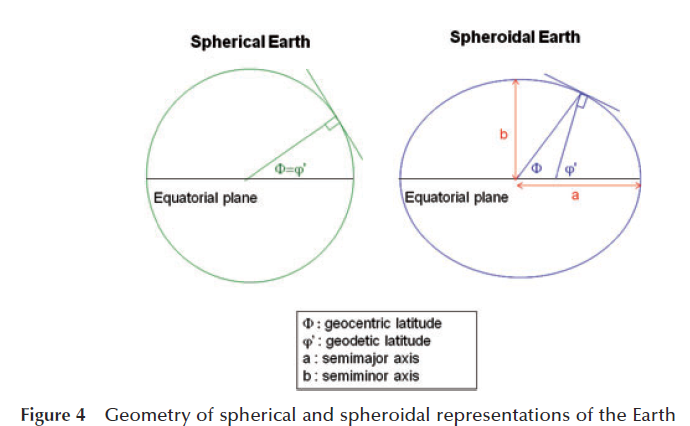 In the 2007 book Unmanned Aerial Vehicle Real-time Guidance System Via State-space Heuristic Search, Manuel Soto makes a similarly clear statement about which latitude is used by the NED (and employs similar figures to illustrate the distinction). The relevant pages (85-88) are available on Google books.

The answer is given in the metadata.

Geographic coordinate system Horizontal datum of NAD83, except for AK which is NAD27

Both versions of NAD (North American Datum) are geodetic systems.

NAD 83 is the datum used to define the "geodetic" network in North America.

NAVD 88 was established in 1991 by the minimum-constraint adjustment of "geodetic" leveling observations in Canada, the United States, and Mexico

Good discussion, However it is easy to calculate between one and other. Initially, just a reminder that in most literature the "official"symbol for geodetic latitude is the small letter phi , while for the geocentric latitude anything else is accepted. But to keep the same symbols let's use PHI (capital) for the geocentric latitude and phi' (small and with the "'") for the geodetic latitude. It can be easily proved that, if "a" is the semi-major axis of the ellipsoid and "b" is the semi-minor axis then... tan(phi') = (a²/b²) tan(PHI) or tan(PHI) = (b²/a²) tan(phi')

Not the answer you're looking for? Browse other questions tagged coordinate-system latitude-longitude united-states geodesy ned or ask your own question.

21
Geodetic Coordinates And Latitude, Longitude
3
Is there a method to tell which hemisphere a point belongs to, in WGS84 geoid, where the equator is an arbitrary ellipsis?
2
Converting a geocentric latitude to a geodetic latitude

4
Converting Geocentric to Geodetic
20
How do you compute the earth's radius at a given geodetic latitude?
3
For a non-geocentric ellipsoid, how does the Lat/Long/Ell Ht & semi-major axis & flattening implicitly define the centre of the ellipsoid?
1
Local Cartesian (NED) to Geodetic (Lat,Lon,Alt) Conversion - Max Distance from Reference Point
0
BIL formatted elevation files from NED