Ask Question
Asked 7 years, 6 months ago
Active 2 years, 10 months ago
Viewed 148 times
1
This question already has answers here:
Layers with same coordinate system should align/overlap in ArcMap but do not? (3 answers)
Closed 2 years ago.

I'm trying to get the percentage of each U.S. county overlaying groundwater (data from the census and USGS respectively). They're both polygons.

I have 1) correctly projected the data and the layer (NAD 83, meters) 2) clipped the counties using a polygon corresponding to groundwater coverage 3) use calculate geography to obtain the areas, so that I can then figure out proportions/percentages. I create a new field for that (double).

I've been toying around with this and other methods, and I cannot get credible area values. They're tiny; almost all 0.01 - 0.1. One of my many hunches was that it's in decimal degrees, but I've projected the data, and it's still showing up incorrectly. The most frustrating part is that the county/state files won't calculate correctly either on their own, which is bizarre (Florida = 15 m2).

The problem is that your data is still retaining the decimal degree numbers, although not units. Subsequent geometry calculations still use the same raw numbers that were associated with decimal degrees, but erroneously assume different units (meters). For example, if I say I'm 65 feet tall, I haven't actually grown, I'm just using different units than inches -- and the measurement is wrong even though the number is right.

Use the Project tool in the Projections and Transforms / Feature Toolbox, which will mathematically transform the data into a different coordinate system.

If the data projection is changed without transforming the data, it will look straight along the top (as Vince pointed out in the comments above) and a little warped. If it is transformed, it will look curved. 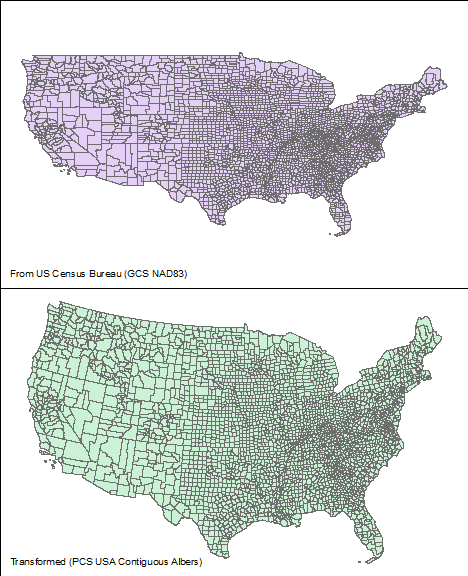 You can also check whether a projection is correct by creating a new data frame, adding in a basemap, and then adding in the data. In this case, I used Define Projection to say the coordinate system should be NAD83 Albers (Contiguous USA), and then put it on the Oceans basemap. The entire US is in the Gulf of Mexico, and is the completely wrong size -- it's that tiny dot 100 miles east of Ciudad Madero. 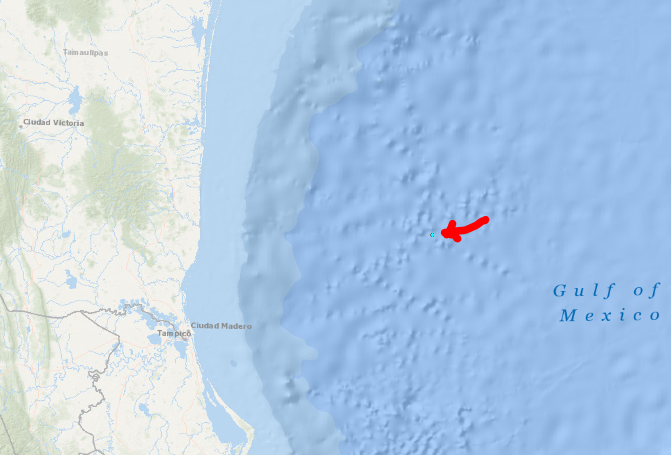 Not the answer you're looking for? Browse other questions tagged arcgis-desktop arcgis-10.1 coordinate-system polygon area or ask your own question.

65
Layers with same coordinate system should align/overlap in ArcMap but do not?
2
Defining projection, reprojecting, and wrong area values
1
What projection to use with Mapbox base/reference layers?

1
How do I know the cause of my spatial error?
2
Aligning layers with questionable metadata in SW Ontario
7
Obtaining same area values provided by Census for TIGER boundaries using PostGIS functions?
1
ArcMap Area Calculations vs MultiNet FEATAREA Field Discrepancy
1
Transforming and Projecting Shapefiles in R & ArcGIS for Desktop?
0
Using Projections, Transformations and Area Calculations in ArcGIS Desktop?
0
How to calculate great circle distance between unprojected SpatialPolygons?