NetworkAnalyst seems to solve along straight lines but not intersections

I've built a network dataset using a road feature class. All the data I mention is stored in a feature dataset within a file geodatabase.

In particular the connectivity is set to Any Vertex, and not Endpoint. After building the network dataset, I was trying to create an OD matrix using a point feature class. This resulted in no distances other than from a point to itself. This pointed to connectivity problems.

I decided to troubleshoot by manually adding points and solving for a route. Long story short points that are connected by endpoint to endpoint traversal work, but as soon as I add the next point on an edge that intersects, the route solver chokes and states there is no path between the two points.

I'm confused what the problem is since connectivity is set to any vertex. I can verify that it seems the network was built correctly since junctions do exist for both endpoint to endpoint connections as well as intersections.

A similar question is asked here with no clear answer other than a suggestion to make sure that route points be located on the network. I do not believe that is my problem since routes between points are solved in the endpoint case.

The properties dialog on the network dataset says I have:

I'm wondering if the network solver knows it can move from endpoint to endpoint since its just a straight line movement, but without turns for the vertex, there is no way to move onto the intersecting edge.

How can I fix this? I've read about turn feature classes, but am somewhat confused how they apply in this situation. I had thought GlobalTurns would handle the neccesary traversal between any edge provided it was connected.

What happens when you increase your snap options? 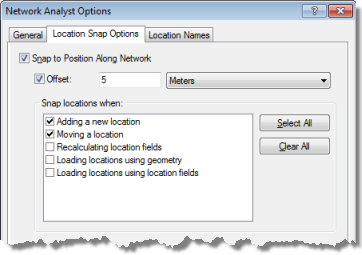 This distance is dependent on the projection you are using.

Not the answer you're looking for? Browse other questions tagged arcgis-10.0 network-analyst or ask your own question.