I have a python script tool that I have published to a geoprocessing service. Every time I run the service it fails. Here's what I'm getting for errors: 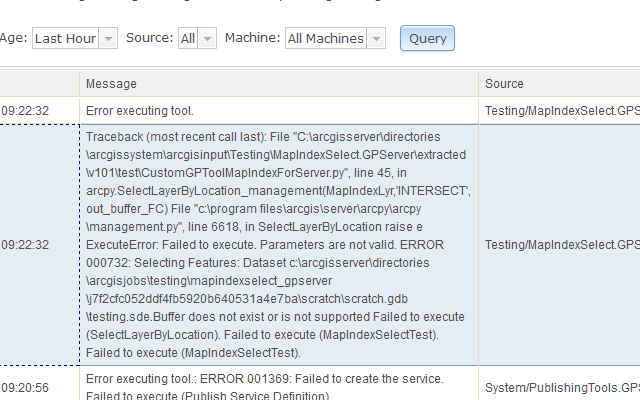 The python code in the tool is below:

The error is telling me that my Buffer output does not exist or is not supported. I know it does exist, and I'm unsure why it would not be supported?

Theres a bunch of things I'd suggest changing. I'm not being picky, I'm listing them all because if you get past the problem you're having, you don't want to get stuck in another section of code.

1) Why are you loading your input into a featureset? I can't think of why this is necessary. Just pass whatever value you're getting directly into buffer.

2) While I guess its not technically incorrect, you're trying to make featurelayer output point to a .lyr file. You dont need the .lyr at the end.

3) Dont use make feature layer. From what I see theres no need for it here. Instead, bring your SDE layer into ArcMap, where it resides in the Table of Contents. Then, from there you make a variable that points to whatever you've named it. If you dragged this layer into your ToC and name it "MapSet", your code goes from this....to this....

Its just a name match. The MapIndexFC variable is a layer and can be used like a layer in the code. Thus you can select on it and no need to use make feature layer. (Of course noting you need to run the tool inside ArcMap when that layer exists for it to work and publish)

4) Wild guess - you didnt register your database with the datastore. I could be wrong here, but if you haven't, go back, register it, then re-publish. But this actually might be point #2 which is causing me to think its not registered. So more importantly, remove the .lyr if you insist on using make feature layer.

5) Is there a reason you're writing the output back to SDE? If there isn't a reason, change this to scratch.

6) Theres no need for this in a gp service. I'd only use this in a stand alone script.

7) "Adding" paths is bad. Better is to use os.path

Not the answer you're looking for? Browse other questions tagged arcpy arcgis-server geoprocessing web-service or ask your own question.