Can I save an ArcGIS geospatial PDF with layers turned off, which can then be turned on individually in a pdf viewer?

I am working on an mxd that has many individual point layers (displaying species locations). To make life easy for my stakeholders, I'd like to export to a geospatial pdf so that all of these point layers are turned off when they open the pdf. They can then select which species they wish to view rather than having to turn off ALL species layers to start with.

arcgis-desktop layers geospatial-pdf
Share
Improve this question
edited May 24 '15 at 0:00

You able to save the default layer states using Adobe Acrobat Pro. You are unable to do this in Acrobat Reader or even Standard, however.

Instructions from Adobe Help are included below, with the default state being the flag to change. 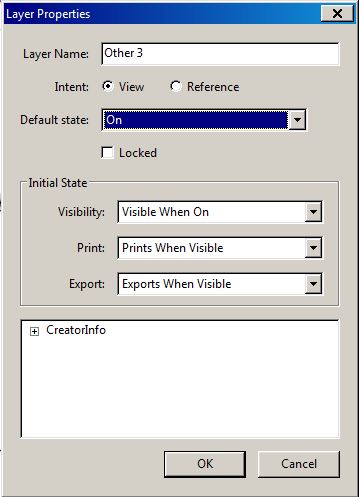 You can combine the default state setting, the visibility setting, and the print setting to control when a layer is visible and when it prints. If a layer contains a watermark, for example, you may want the layer to not show on-screen but always to print and always to export to other applications. In this case you can set the default state to on, the initial visibility to never visible (the image doesn’t show on-screen), and the initial print and initial export states to always print and always export. The layer need not be listed in the Layers panel, since all the state changes are handled automatically.

Select View to allow the layer to be turned on or off, or select Reference to keep the layer on at all times and permit editing of the properties. When the Reference Intent option is selected, the layer appears in italics.

Defines the initial visibility state of the layer when a document is first opened or when the initial visibility is reset. The eye icons for layers are initially shown or hidden based on this value. For example, if this value is set to off, the eye icon for a layer is hidden when the document is first opened or when Reset To Initial Visibility is chosen from the options menu.

Determines whether a layer will print.

Determines whether the layer appears in the resulting document when the PDF file is exported to an application or file format that supports layers.

Any additional properties that the creator of the layered PDF has associated with a specific layer are shown in the box at the bottom of the Layer Properties dialog box.

Not the answer you're looking for? Browse other questions tagged arcgis-desktop layers geospatial-pdf or ask your own question.

2
How can I set which layers are visible by default in a geoPDF?

1
Turning off all layers in MXD using ArcPy?
2
ArcGIS 10 PDF exports: toggle polygon layer visibility?
3
Group Layer On/Off Behaviour
6
Turning on another layer when one is selected in TOC using PyQGIS?
0
Layers left off when running python via Windows Task Scheduler
0
Forcing ArcMap to display HTML pop-ups for just one layer?
2
Can QGIS geopackage files with multiple layers exist as a single file with the .gpkg extension?