I have a world map in the WGS 1984 Geographical Coordinate System. I want to measure the lengths of borders between countries in kilometers. To get the units in meters, I have first used the Define Projection tool and then the Project tool to change to the Robinson Projected Coordinate System. After that, I am using the Intersection tool and setting the output type to "line" to get a Shape_length column where I will have all the borders and their lengths. But, the value in the Shape_length column appears to be wrong as it measures the borders to be only a few meters. The Measure tool does the same thing.

I can't get my head around what I am doing wrong. I've attached a print screen of the data frame. What could the problem be? 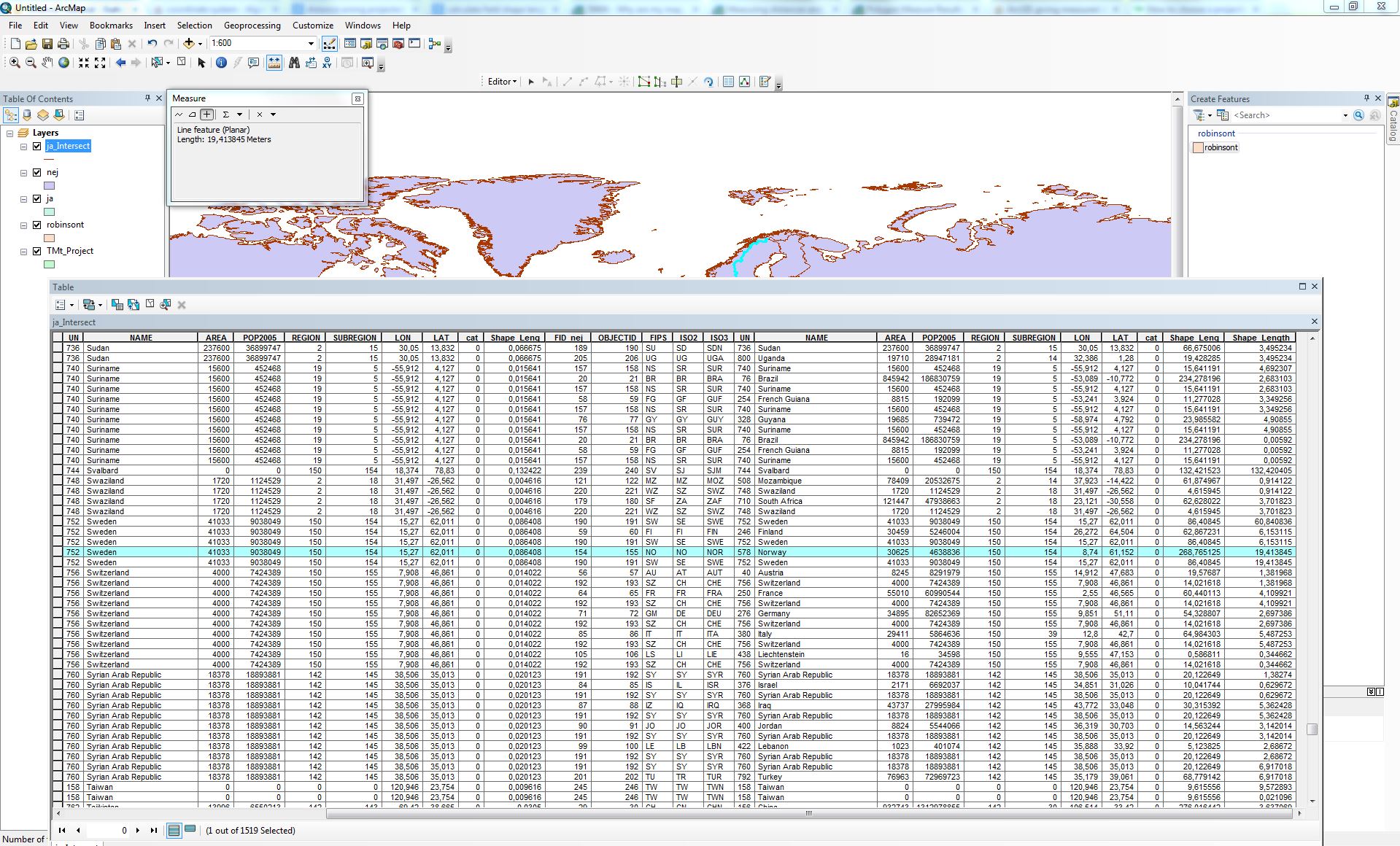 Since you ran this before running Project (which mathematically transforms the data into a different coordinate system), your data is still retaining the decimal degree numbers, but with different units. So the geometry calculations still use the same raw numbers that were associated with decimal degrees, but erroneously assume different units (meters).

Try running just Project, and see if the measurements are more what you expect. (If the original world border data has no existing projection, then use Define Projection to assign it WGS84, and then Project to the new coordinate system.)

Quoted from About coordinate systems and map projections

Other projections minimize overall distortion but don't preserve any of the four spatial properties of area, shape, distance, and direction. The Robinson projection, for example, is neither equal area nor conformal but is aesthetically pleasing and useful for general mapping.

You may want to check out this resource:

Not the answer you're looking for? Browse other questions tagged arcgis-desktop arcgis-10.1 coordinate-system wgs84 measurements or ask your own question.

61
Layers with same coordinate system should align/overlap in ArcMap but do not?

3
Cannot get areas for polygon layers in ArcMap?
2
Accuracy of shape area measurements when GCS shapefile is source of layer in PCS Data Frame?
4
How do I figure out the length of polyline features in a feature class with a WGS 1984 coordinate system?
0
Calculating centroids in decimal degrees using ArcPy without reprojecting vector data?
2
WGS84 expressed in meters - default projection in ArcMap