Looping through subsets and spatial joining to single output?

I have two feature class files, point file and polyline file and would like to spatially join pairs by looping/iterating based on a conditional IF statement. The resulting pairs would then be loaded into the ArcMap spatial join tool (v 10.2.2). Below is my attempt to block out the logic.

OUTPUT FEATURES CLASS to a new feature class with the spatial join (that allow all subsets to be inserted).

LOOP (ITERATE) For the next State Code value until all codes have been matched and the all spatial joins of the subsets are completed.

The idea is to not have to load 50 pairs of point and lines files to complete a spatial join. Spatially joining the whole US set of points and lines at once takes a very large run time. In essence you’ re giving ArcMap a much smaller task at a time only having to spatially join a state of point to a state of lines at a time. 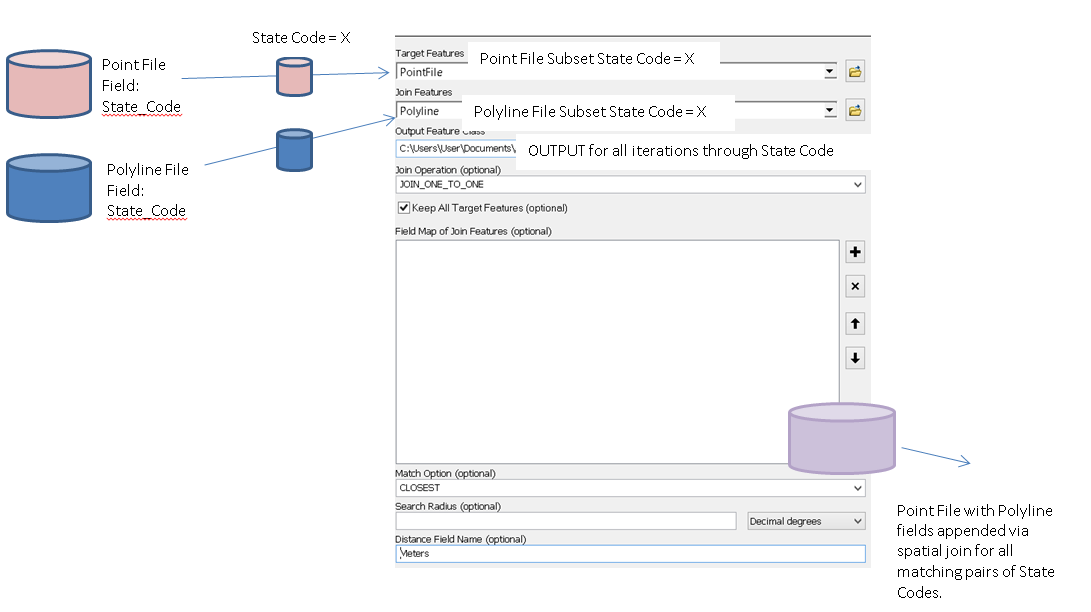 This can be achieved in ModelBuilder. You would use a Feature Selection Iterator to iterate through the state codes and use that to select your points/polylines. The selection could then be used in a spatial join.

Basically you need to read up on ModelBuilder and the iterators that can be used to loop with.

Not the answer you're looking for? Browse other questions tagged arcgis-desktop modelbuilder spatial-join or ask your own question.

1
Spatially Joining Many Shapefiles. Use Spatial Join or UpdateCursor?
1
ArcGIS 10.2 Modelbuilder Spatial Join is not generating an output
3
Summary Statistics after Spatial Joining in Modelbuilder
0
Using ArcGIS ModelBuilder to Spatially Join using subset of point shapefile?
1
Getting all Null when spatial joining lines with polygons (ArcGIS Desktop 10.5.1)
1
spatial join with the same merge rules for multiple fields in a single feature class