I am trying to fully understand the concept of Azimuth and I am encountering some inconsistencies (or maybe it is my error).

I show you some examples that do not match, hoping somebody can explain me how this really works.

I show the coordinates in EPSG:900913, in PostGIS and using my own JavaScript function.

Additionally, this calculator also show that the Azimuths of horizontal lines are not 90 degrees when Y != 0 (not on the equator).

How is it correct?

On the surface of a sphere, all lines are "horizontal lines" by definition. But you mean something else!

If you refer to lines parallel to the equator (parallels of latitude), then they are all oriented E-W, i.e., have 0 or 270 azimuths. Any line, including those parallels, whose azimuth is unchanged at all points along it, is called a loxodrome (or rhumb line).

If you refer, however, to the azimuth of the shortest line between any two points on the surface of a sphere, such lines are called great circles (or geodesics or orthodromes) and, generally, the azimuth varies as you travel along it. 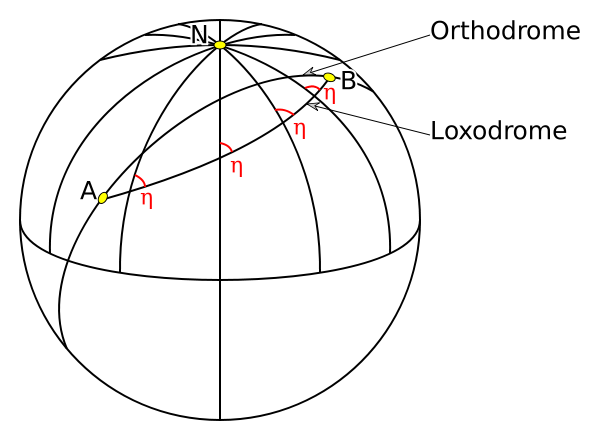 The equator is both an orthodrome and a loxodrome. So too are the meridians. Parallels of latitude, however, are only loxodromes. The orthodrome connecting any two points of equal latitude veers away from and then back towards the parallel of lattitude. How far away it veers depends on how large is the latitude (away from the equator) and how far apart are the points.

If PostGIS got it wrong, you probably didn't tell ST_Azimuth() to use geographic coordinates.

Not the answer you're looking for? Browse other questions tagged postgis javascript azimuth geodesic or ask your own question.

57
Why is the 'straight line' path across continent so curved?
2
Different ST_AZIMUTH results for ST_PROJECT points along the same original bearing

3
Which one of these azimuth values is the right one? And why?
10
How to create circular polygon in openlayers 3?
3
PostGIS query to get a list of points
1
Creating a geodetic line that goes around the whole ellipsoid with pyproj
5
Querying Elevation Data in Postgis
1
Strange result with ST_Distance, geography type and equator
2
If rectangle corner points have same nearest neighbor, does whole interior?
4
Get lat/long given current point, distance and bearing