OpenLayers - Add points at vertices of line while drawing line

I would like to create points while I draw a line on my map in OpenLayers. That is, at each vertices of a line and at the end points there is a shape like a square, circle, or diamond.

I have this partially working. I can add points at the vertices of a line while I'm drawing it but they are one off. The point/shape doesn't render at the beginning of the line but at the second point in the line as you can see below. Also, the end of the line has two points/shapes; you can't see it since they are stacked. 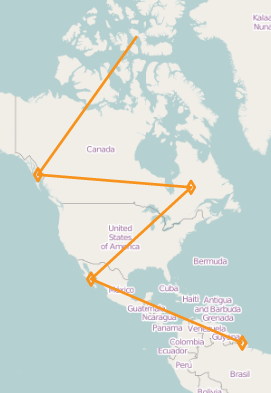 Here is my code that adds the point/shape as I'm drawing my line (see the point callback in my DrawFeature control setup).

console.log(point) gets called at all the correct times. When I output my point_collection variable that I setup to figure out what is going on, the points are different than those output by console.log(point) from with the point callback.

I have a feeling that it has something to do with when I'm actually adding the points to the vector layer but can't figure it out.

4
Arcgis 10: Point layer, polygon line layer, draw points to the nearest polygon point or other nearest line?
5
adding multiple points to a linestring in PostGIS
0
Polygon coordinates Format in Openlayers?
5
Converting Vertices of Polylines and Polygons to Points and Maintain Attributes
4
How to get the coordinates of the starting and ending points of a line in ol.interaction.Draw in OL3
6
QGIS: Cut line feature by the nearest point
2
Convert a linestring into a closed polygon when the points are not in order