I have a FME transformer that converts MapInfo TAB files to GML. What I would like is for the pen colour, pattern and width information to be brought across to the GML somehow. It really doesn't matter how it appears in the GML as the resulting file is parsed by some custom code anyway. It would probably be ideal for it to appear as an XML attribute on each feature in the file, though.

I put in an AttributeExposer with the following attributes:

and I was hoping to see these in the output, but sadly not. What am I doing wrong?

Here's what I have currently:

The Pen_Color isn't coming through, so I added another attribute Test set to a constant to see whether the expression on the former was the issue. That does not appear in the output GML either.

You can't build style into a GML the same way as you can in a MapInfo tab, however you can still bring that information over into your GML as an attribute against the features.

You will need to add attributes to you GML feature to accept your MapInfo pen, color and width . 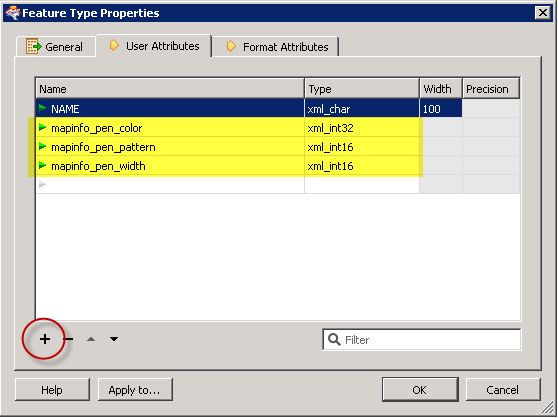 You may want to decode the integer values into more user friendly definitions before writing them to the GML.

If you want to retain the styling as part of the feature, KML may be a better option.

Not the answer you're looking for? Browse other questions tagged mapinfo fme gml or ask your own question.