How to make feature display after converting Features to Graphics?

I used the "Convert Features to Graphics" tool on a polygon layer. It worked correctly with my feature no longer shown but a graphic being displayed instead.

However now, I'd like to display my feature again. The feature layer is turned on and the symbology is set, just as it was before. I tried deleting the Graphic group from the Annotation Groups in the Data Frame Properties, and I also tried deleting the graphic, with no success.

If I add the shapefile again using the Add Data button, it appears in the map. I could use this workaround but it seems like there should be a way to salvage my existing layer, rather than having to abandon a layer each time you convert its features to graphics.

You can turn those features back on under the Display tab within the Layer Properties (just right-click the layer and select Properties). At the bottom of the tab is a list of features that are not displayed, including any that have been converted to graphics. You can pick and choose which ones to restore or click Restore All to bring them all back. 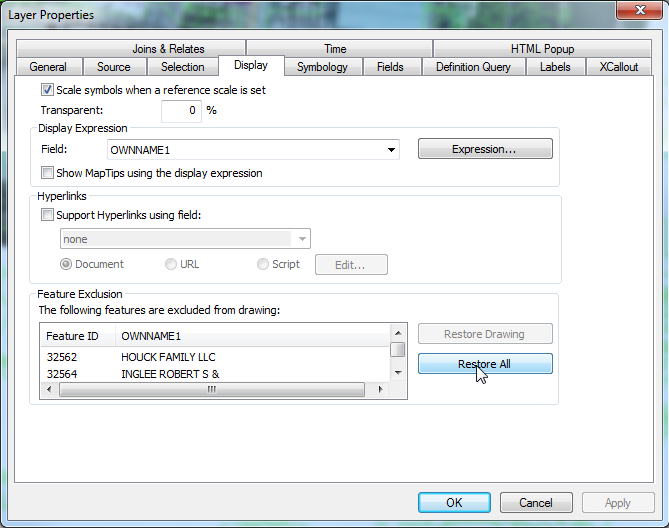 Not the answer you're looking for? Browse other questions tagged arcgis-desktop arcgis-10.2 or ask your own question.