I'm trying to extract ditches using the LIDAR DTM using the software eCognition but I am actually having a hard time since the paper where I based my workflow entitled "Ditches’ network extraction and hydrogeomorphological characterization using LiDAR-derived DTM in wetlands" doesn't have detailed rulesets that were input in eCognition.

I just want to ask, who among you here have an idea how to extract ditches in agricultural landscapes or maybe in an urban setting perhaps, the ones alongside roads?

Or if ever you haven't done such work or project, who else might have a bright idea that will enable me to extract ditches.

I've had to map ditches from 1 m LiDAR derived DEMs of agricultural landscapes before. It's certainly a challenging task to come up with a workflow that is suitable. You're ability to successfully extract a ditch network will depend on a number of factors. For example, are you only interested in roadside ditches? If so, are the roads on embankments (as is usually the case in agricultural settings) and do you have an accurate road vector file (this can be critical for this task)? Or are you also interested in in-field drainage ditches? Do you have the raw LiDAR point cloud, or just an interpolated DEM? If you have the later, then it is critical that you do not apply any kind of smoothing filter, which unfortunately is commonly done with LiDAR DEMs because of their excessive surface roughness, prior to the analysis. Unfortunately, a low-lying roadside ditch is easily removed with a 3 x 3 mean filter in a 1 m DEM. If you have the LiDAR point cloud, then I would recommend interpolating your DEM grid using a Nearest Neighbour interpolation scheme (assuming a high point density) because, although this will increase the surface roughness compared with something like IDW, it will better preserve the ditches.

Now, assuming you have a road vector and that you are only interested in roadside ditches, here is a workflow that you might use:

In the image below, the roadside ditch network is shown in black, overlayed on top of the DFME image with the DEM's hillshade showing transparently through. I think it worked reasonably well in this case, but again, it requires a bit of finness and playing around with various parameters. 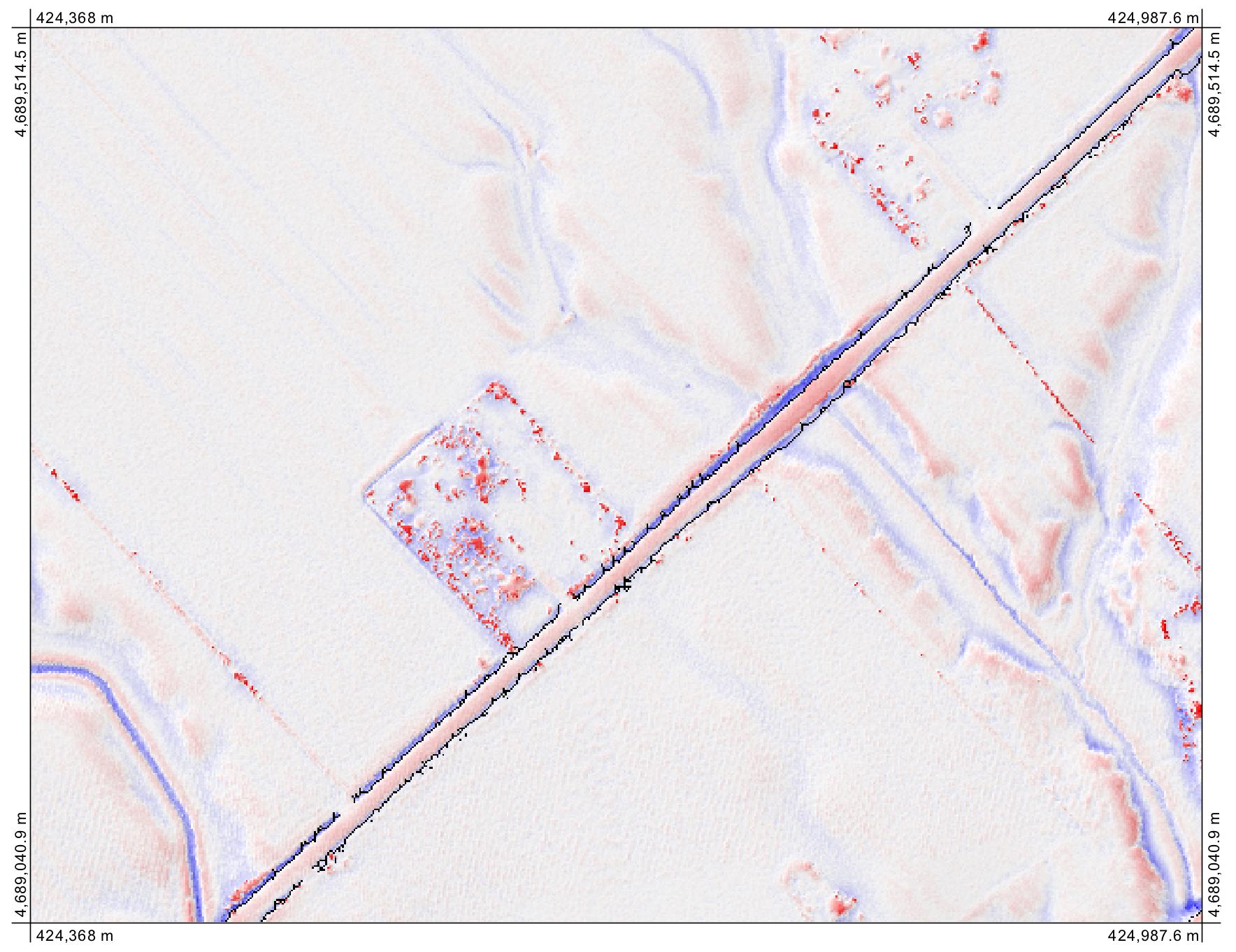 If it turns out that you aren't just interested in roadside ditches then there is a tool in Whitebox called Map Gully Depth, that could possibly be used for this task depending on your data and landscape. It's a tough one to use, so give me an email if you decide to go this route and I'll be happy to give some guidance. The main issue is that it is hard to use surface flow patterns (e.g. flow accumulation images) to map ditches because, unlike with streams, ditches in agricultural settings are used as much for temporary water storage as they are for water conveyance. They don't generally have the gradients that you find in natural streams. Nonetheless, I've developed a depression breaching algorithm in Whitebox that can be used to improve the drainage through ditches, which could also be useful for mapping in-field ditches. Again, care is required here so if this is the route you need to go, then contact me and I'd be happy to help.

Not the answer you're looking for? Browse other questions tagged dem remote-sensing feature-extraction digital-image-processing ecognition or ask your own question.