Why am I getting small float numbers when aggregating points containing large integer values in QGIS?

I have a layer of points containing the centroids of European NUTS regions at NUTS 3, with population data in the atttribute table. I want to aggregate this population data to NUTS level 1, which is contained in a polygon layer.

As such, I use the QGIS tool Merge attributes by location. The operation finishes without error, but the resulting summed population values in the created polygons are all very small float numbers. See the picture below for examples on input and output data: 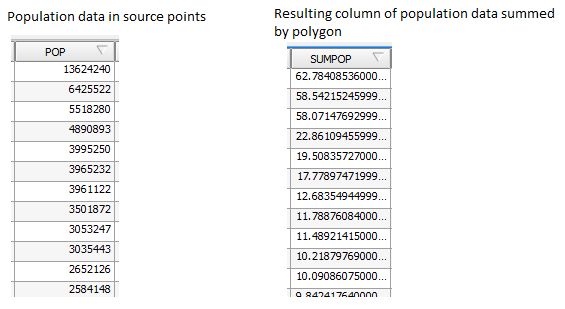 I have double checked that the source data is integers, and are formatted correctly. I also tried running the tool both from the vector menu as well as the processing toolbox.

Am I doing something wrong, or is this a bug in the QGIS spatial join?

It seems like this happens when there are duplicate number (float or integer) columns in both the join and target layers. I removed the columns containing numbers in the input point layer that were also present in the target polygon layer, and now the population attribute is summed as expected. Although the output is still in float data form, the numbers are correct.

Not the answer you're looking for? Browse other questions tagged qgis merge statistics aggregation or ask your own question.