Is there a known methodology for removing the trend from a DEM surface?

For example, if I had a DEM of a river, that river would flow from high elevation (upstream) to lower elevations (downstream). Even if the distance from the top of the water surface to the bottom of the river bed were the same across the whole river, the downstream portion of the raster would still have lower elevation values in the DEM. Is it possible to even out these values so that areas of equal depth also possess equal elevations?

When removing this trend it would be ideal to preserve the overall characteristics of the DEM, such as dips in the riverbed. 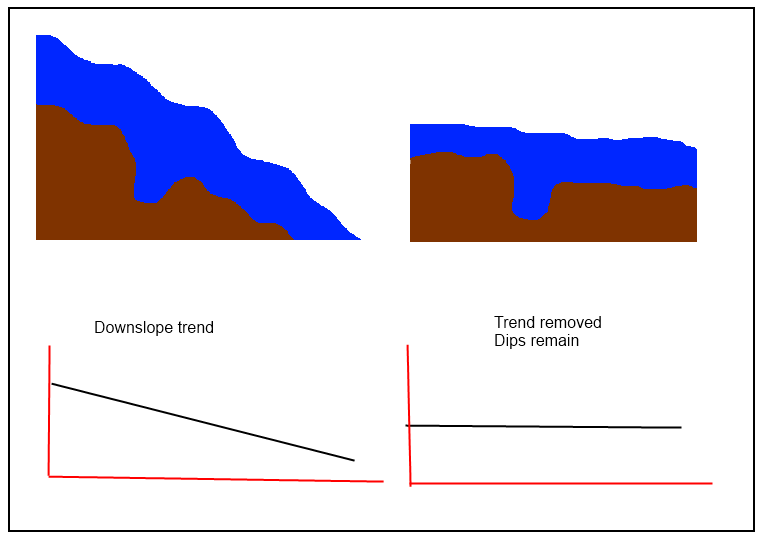 @jul is correct that "you need to compute a trend surface, and then subtract it from your initial DEM to obtain the 'detrended' one," but it sounds like simpler procedures are needed in this case to "preserve the dips." If the "trend surface" too closely follows the original DEM, then the residuals will not retain the local characteristics of the surface. Thus, among the techniques to avoid are all the local ones (splines, filters, and--especially--kriging) and the ones to favor are global.

A simple, robust, direct approach is to fit a plane to the DEM in the vicinity of the river. This doesn't take any fancy technology or heavy computations, because (according to Euclid) a plane is determined by three (non-collinear) points in space. Accordingly, select one point (x1',y1',z1') = (coordinates, elevation) at the head of the river, another point (x2',y2',z2') at the downstream end, and a third point at (x0',y0',z0') of your choosing away from the line segment connecting the first two points. (These coordinates are indicated with primes because we will soon change them.) This last point does not have to correspond to a point on or even near the ground surface! In fact, a good initial choice might be to set its elevation to the average of the upstream and downstream elevations, z0' = (z1'+z2')/2.

The calculations are eased by adopting the point (x0',y0',z0') as the origin of a local coordinate system. In these coordinates the other two points are at

Any arbitrary location, at (x',y') in the original coordinate system, has coordinates (x,y) = (x'-x0',y'-y0') in this new system. Because any plane passing through the origin (0,0,0) must have an equation of the form z = a*x + b*y, this reduces the problem to the following:

The unique solution is to compute

Having found these two numbers a and b, and recalling the two original coordinates x0' and y0', a raster calculation of the form

(I hope some readers appreciate how this approach avoids all references to trigonometry or least squares machinery. :-)

I've found de-trending with trend analysis unsatisfactory for rivers. It may work in regions like the midwest but in the west a single linear or polynomial surface never seems to approximate the river gradient very well because of the complex topography. What I've used instead is weighted averaging where I compare the elevation of an upland pixel to a weighted average of the river using a kernel density (see article in Winter 2010 ArcUser). This produces a more "localized" result. It is still possible to get some negative values, but I've found that those values seem to be confined to the river channel and are most common in steep gradient areas. More recently I've experimented with pathdistance approaches to mapping "flood height" but this doesn't won't highlight those degressions that you are interested in.

You need to compute a trend surface, and then subtract it from your initial DEM to obtain the "detrended" one.

To compute a trend surface, any surface simplification function may be used (filtering, spline smoothing, kriging, etc.). This choice depends on how you want this trend surface to look like.

Here is an example on how to use kriging in arcGIS 10.0 for that.

Not the answer you're looking for? Browse other questions tagged dem gis-principle or ask your own question.

3
Extract hills from DTM in QGIS
2
Find higher elevation (10m) perpendicular point from stream network at regular interval
3
Problem with Flow Direction in DEM
3
Is it possible to reverse the trend/values of a raster?
1
Detrending DEM (QGIS)
0
Generating extent of 1 ft rise in floodplain using ArcMap
1
Detrending DEM in floodplain?

4
DEM local adjustments - terraforming
5
How to (vertically) register a DEM to GPS readings?
1
Regarding Atmospheric correction and Elevation DEM Projection system
1
Select neighboring cells from a raster under conditions