Is there a standard for the specification of .prj files?

Is there a standard how the parameters must be specified in a prj file?

I have found no information about this. Even in ESRI Shapefile Technical Description there is no information about .prj files. The ESRI KB Article 14056 HowTo: Create projection metadata (.prj) files for shapefiles says: “You have to use the predefined names for map projection and parameter objects”. But the article does not specify where to find these predefine names. Does each GIS-company specify it own names? Or does EPSG specify these names?

Here are a few differences in a section of .prj files (EPSG 4647) between QGIS, AutoCAD Map and spatialreference.org 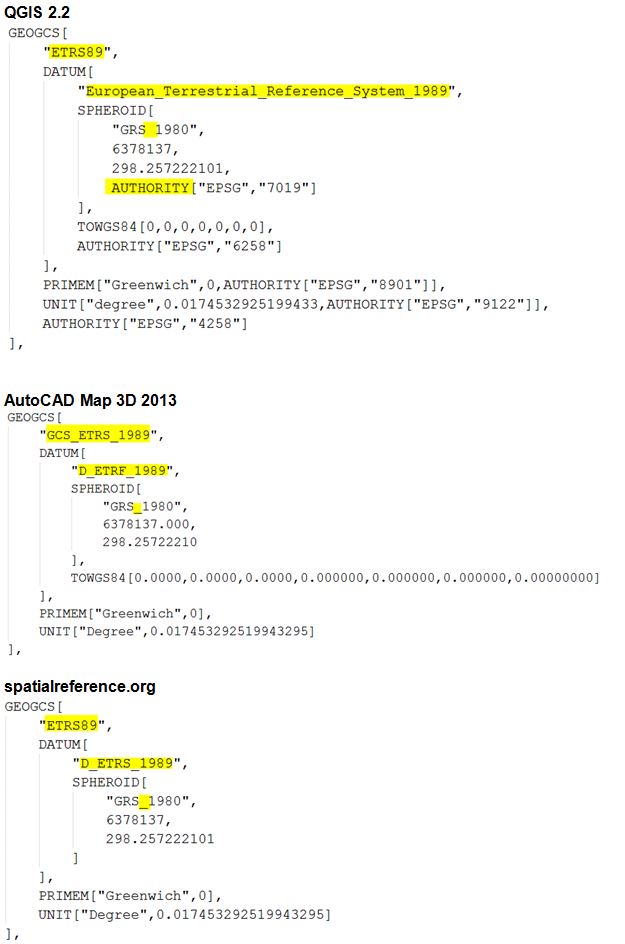 There's some information on the OGC Call for Comments page on the new specification for coordinate reference system WKT standard.

The original specification was written by Esri many moons ago for OGC based on the mid-1990s version of the EPSG Geodetic Parameter Dataset's schema. It was revised and extended by other OGC specifications. Because it was a very loosely defined specification, there arose many, sometimes subtly, different implementations. Over the past two years or so, a new specification has been hammered out. It's currently at ISO for comment.

Although I have some documentation on 'best practices' for writing an Esri-flavor prj string, it's not been published in the documentation.

The EPSG registry can now export WKT for its objects based on this new specification. Here's WGS 84, geographic 2D CRS, as a sample:

Existing WKT should be able to be read by a 'new' parser, but the converse won't be true. Some changes to note:

Update 6 July 2016: The CRS WKT specification/standard has been approved by ISO and OGC in 2015. The OGC version is here.

The names you marked are truely free to use, because the relevant data is in the following parameters. The .prj file has to be in WKT format, as explained here:

Those keywords have to be used exactly, but not the names.

Every (good) software looks at the parameters, and makes its own projection definition from it.

Alternatively, EPSG codes can be used (except for the datum shift).

Not the answer you're looking for? Browse other questions tagged shapefile coordinate-system standards or ask your own question.

3
Different definition of EPSG:3857 in GeoTools and QGIS
2
When are .prj files included with Shapefiles?
2
Using World Files to Reference Raster Datasets in ArcMap