In ArcMap I have to represent water data that has extreme disrepencies between the figures, so when I create a bar graph one graph is much larger than the others. Even if I convert these figures to a percentage it is 99% versus the others which are less than 1%. The only thing I can think of is to use pie charts of the same size, but then this doesn't show the visual aspect of the differences between figures by looking at it (e.g that one uses more water than the others).

Does anyone have better ideas on how to represent this data using ArcGIS 10.1 for Desktop?

also is there a way to move the placement of the charts so they don't cover my reservoirs?

update - I cannot remove the outlier because I have 9 regions, all with outliers that have higher amounts of water than the others. The only thing I can do is change the size of the pie chart based on a field but this causes some pie charts to be tiny dots, so I have had to create a ratio based on a scale to represent my figures.

I am not 100% clear on what you are asking, and you editing your question to include a picture would help that, but there are two other options on the Pie Chart Size dialog, besides Fixed Size, that you could try: 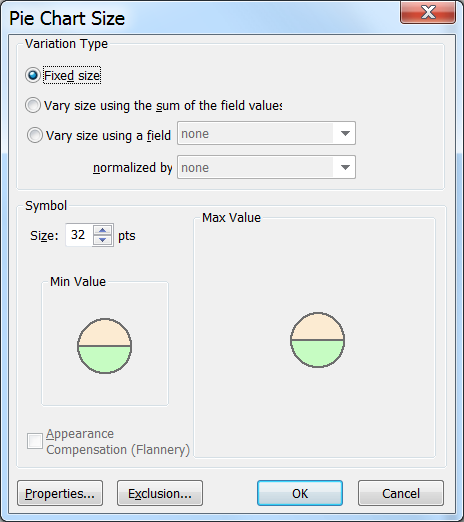 Not the answer you're looking for? Browse other questions tagged arcgis-desktop arcgis-10.1 chart or ask your own question.

1
Creating Pie Chart with radius based on another field?