How to filter LiDAR data by scan angle?

I am looking to filter LiDAR data (.las format) by scan angle specifications (e.g. keep all points < 15). From a basic Google search, it appears that the libLAS library has the ability to filter by scan angle using las2las.

What other tools exist to filter .las files by scan angle, either open-source or commercial? I am particularly interested in tools that are suited for bulk processing.

I just finished writing a script to accomplish this task using the free and open-source GIS Whitebox Geospatial Analysis Tools (download here), for which I am the lead developer. The source code of the script can be found here. Although the script is not yet part of the current official Whitebox release (v. 3.2.1) you can get an early version of it by selecting Update Scripts From Repository from the Tools menu. You will need to relaunch Whitebox after doing this. You should then find a new script in the LiDAR toolbox called Filter LAS Scan Angles. Unfortunately you won't have an associated Help file until the public release of the tool with the next version of Whitebox. 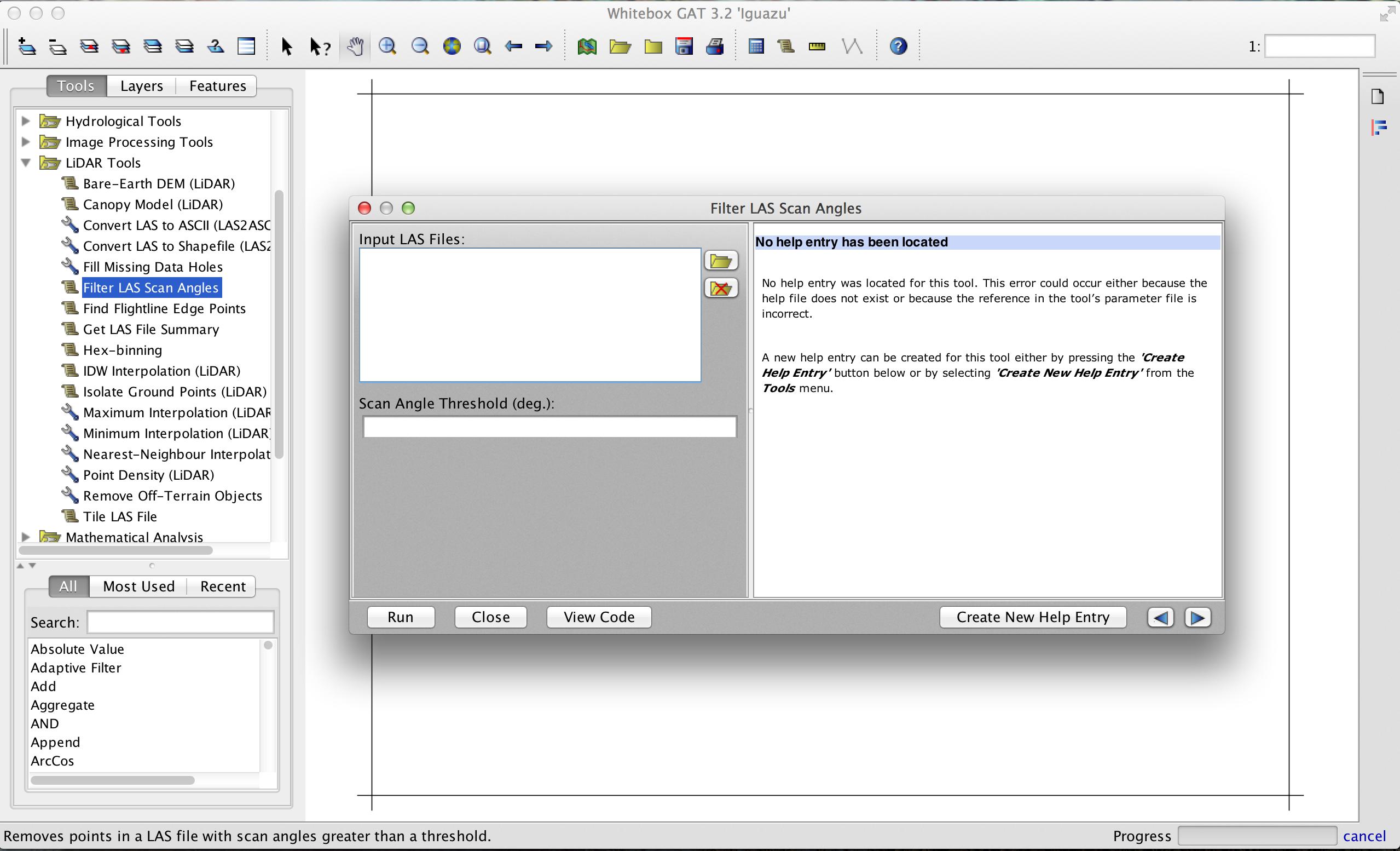 The tool takes any number of LAS file inputs and will filter them in parallel. Thus, the performance should scale with the number of cores you have on your system. If you want to integrate the tool within a workflow involving multiple steps or run it in batch mode, you can also call the tool from a Python script in the Whitebox Scripter using the following as an example:

The tool will output a ShapeFile of MULTIPOINTZ shapetype for each LAS input. The elevation and intensity values are stored in the Z and M properties of the points respectively. I hope that suffices, if not, I can work on it to output LAS files, but it'll take more time.

Here's an example, where I've filtered a LAS file to remove all points with a scan angle greater than 4 degrees. The resulting ShapeFile (in green palette) has been overlayed overtop the original LAS file (in blue palette) and you can see the flight line pattern associated with varying point scan angle. 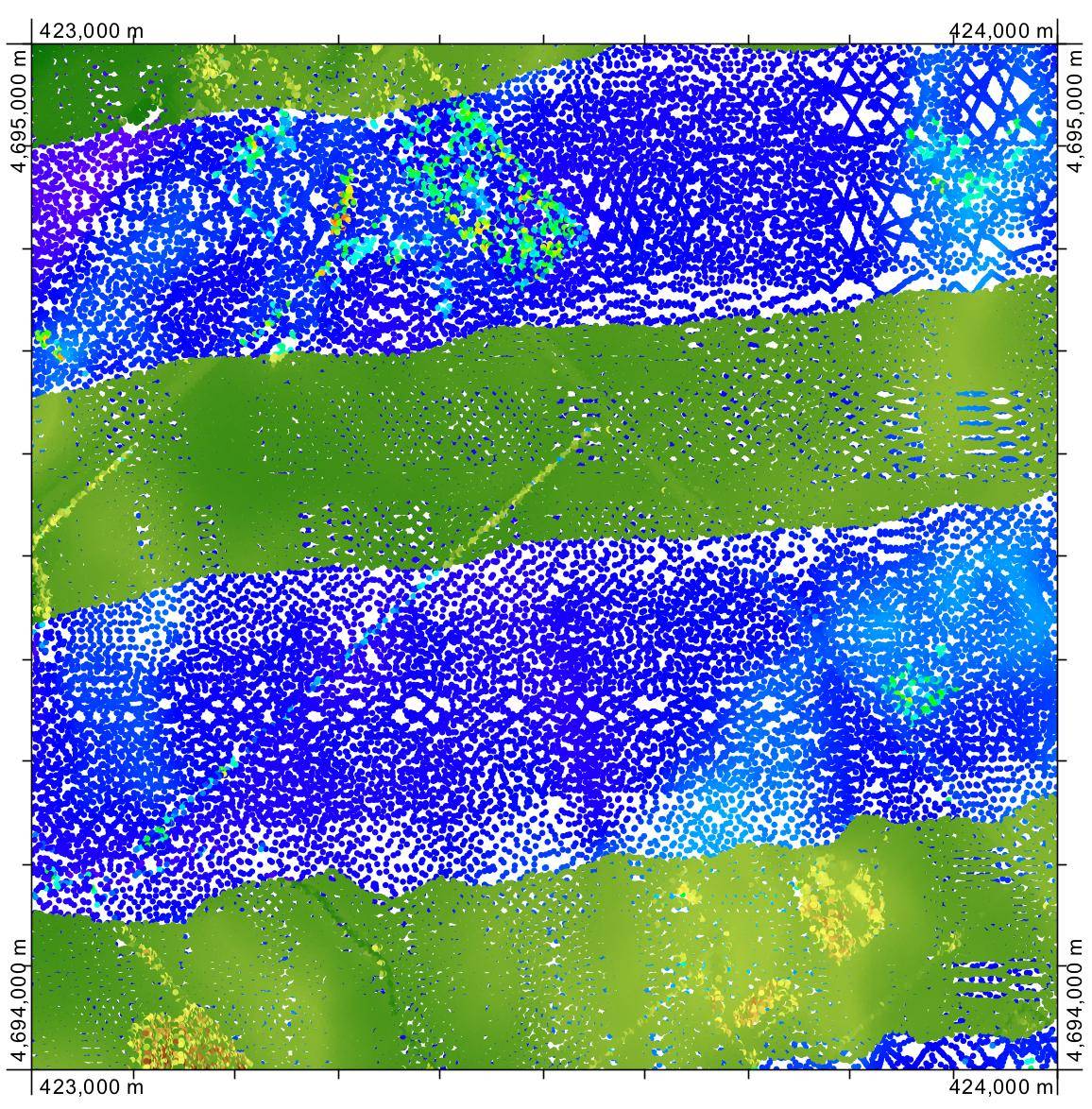 In terms of commercial software, FME can do this using PointCloudFilter transformer: 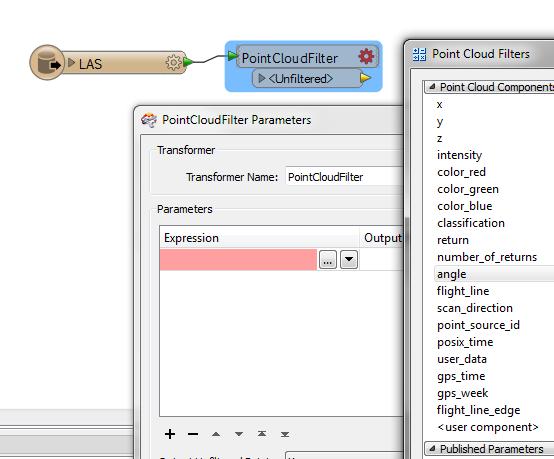 The syntax required in the 'expression' input is unique to FME, but easy to learn. Here is a video demonstrating how to use PointCloudFilter expressions.

In general, FME would probably not process point clouds as fast as a dedicated LiDAR software, but it could certainly handle any bulk .las tasks.

So the ClipData parameterization* for keeping all points with angles < 15 would look like:

The 'Technical Details' section in the manual has some considerations about this update, though. One important part of it states that 'ClipData` won't work yet with .las files of version 1.4.

Cloud Compare has a simple interactive solution too!

1) Select the point cloud in the 'DB tree' by clicking on it once.

3) Scroll further down to 'SF display params'. In 'Display ranges', play with the slider or manually enter the values of your desired range. It is an interactive tool and it will grey-out all the points which do not possess the values falling in the range.

Not the answer you're looking for? Browse other questions tagged remote-sensing lidar filter las angles or ask your own question.