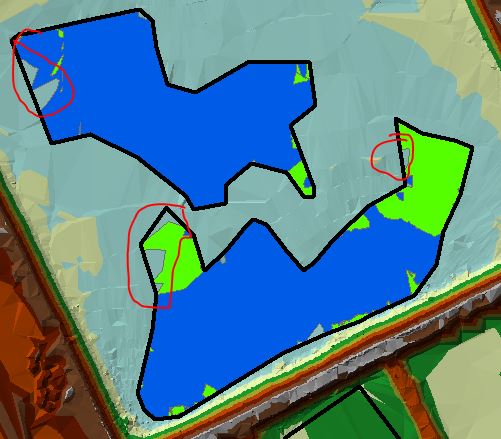 I have occasionally come across the illustrated problem where the output does not cover the full extent of where the surfaces overlap. The black line is the edge of the two TINs submitted to the Surface Difference tool. One TIN is the topographic surface, the other is the bottom of oil surface from dip data. In the red circled areas in the image you can see where the tool output polygon does not extend to this edge. Both TINs had been soft clipped with this polygon before being used in the tool. I have tried hard clipping them, same problem. One of them is a topographic surface and so is valid outside of the clipping polygon. I therefore tried it without first clipping this TIN. Same issue. Another example: 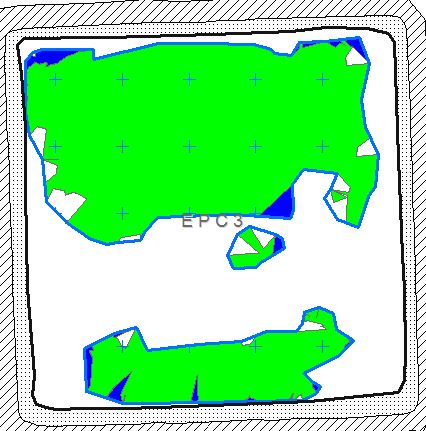 When I clipped both surfaces to the same extent the problem was actually reduced but did not disappear, and the volume reported increased, to me indicating that there was indeed a problem introduced by the inconsistencies at the output edge. I ended up being able to fix this by buffering the wet area polygon by 0.01m. Then I softclipped the bottom of oil surface with this. Problem solved: 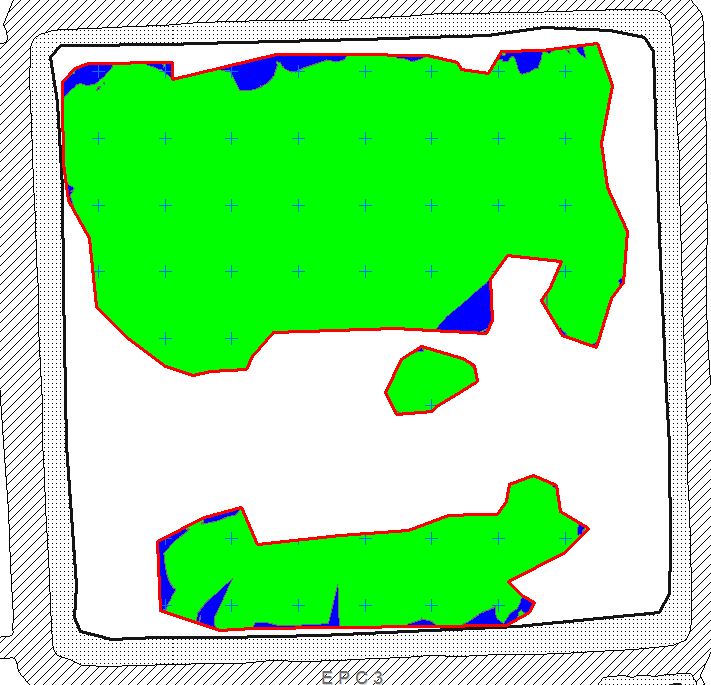 What is the reason for this solving the problem? I'm guessing it is because the two surfaces intersect, rather than one meeting the other. Through intersecting it is clear what lies between the two surfaces. If they just meet, and the way that this is expressed is influenced by rounding or something else to do with number precision, perhaps the tool will find a smaller area within which the two surfaces overlap?

Could it be that the tool you're using calls the InterpolateShape function under the hood, the docs of which are: http://resources.arcgis.com/en/help/main/10.1/index.html#/Interpolate_Shape/00q90000006m000000/

The sample_distance parameter which: By default, this is a raster's cell size or a TIN's natural densification.

In the GUI tool you use, is there an option to use a smaller sample_distance?

Also, to ensure your sample_distance value gets used, the vertices_only will default to use DENSITY so make sure it's not set to VERTICES_ONLY, which will ignore your 'custom' sample_distance.

My disclaimer is that I don't have ARC, but in many of these tools, the process you do in the application reflect the underlying code. Hopefully there's a sample_distance setting in your tool...if there is, try altering it! Good luck.

Not the answer you're looking for? Browse other questions tagged arcgis-desktop arcgis-10.2 tin volume or ask your own question.

5
Comparing two TINs created using ArcGIS for Desktop?
0
Extrude Between Tool not working for me
2
How to calculate volume of bund around pit from TIN and external feature edge
4
Removing distorted edges of TIN surface?
0
Surface Difference TIN Output in ArcGIS | Python Code
1
volume mass calculation
2
How can I create a fill beneath my 3D surface in ArcScene?
1
Many-to-many clip in ArcGIS 10.2
1
Clip tool output does not follow the shape of the output extent and raster values are simplified