How many A features that fall both in the B polygons and C polygons are for each C polygon?

I have this apparently complex problem for solving in ArcGIS: 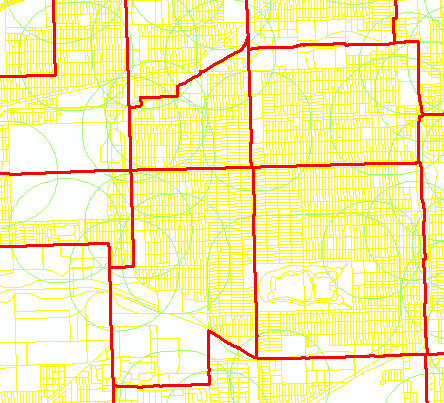 Practically, I need to get the number of all yellow polygons that fall within both the green polygons and the red polygons. I need this for each red polygon.

In other words, I need an attribute column attached to every red polygon that holds the count of yellow polygons contained within the green ones.

I can only think of Spatial Join, but I find it very cumbersome to pass the count of yellow blocks from green polygons to red ones.

Are you aware of any other straighforward tools?

Straightforward no, but a not too hard block of Python code might help you out. First, make sure you have added a new field in the Red Polygon attribute table and call it something like "field_count". The code is this:

4
ArcMap 10.1 SP Spatial Join Problem (lines within polygon)
1
How to generate polygons upto the edge of other polygons?
5
Intersect, Spatial Join?: One Line crossing Multiple Polygons, assigned wrong attribute
1
Count the number of polygon features within a polygon
2
Split polygons from a shapefile according to other polygons in another shapefile keeping the overlapping polygons separated in Arcgis
1
Calculating area of blocks in polygon intersect?
4
How get intersection of polygons in the same table by PostGIS?
0
Choosing ArcMap Network Analyst Tool
4
Counting points in non-overlapping parts of polygon-buffers