Clip raster by shapefile in parts?

I am trying to write .sh script command to clip raster by polygonal shapefile. Shapefile have name field with unique name of polygon feature. On the output must be rasters with name of polygons in shapefile. I'm use Linux, GDAL. Now I use command

but in output I receive one raster.

Example on the picture: 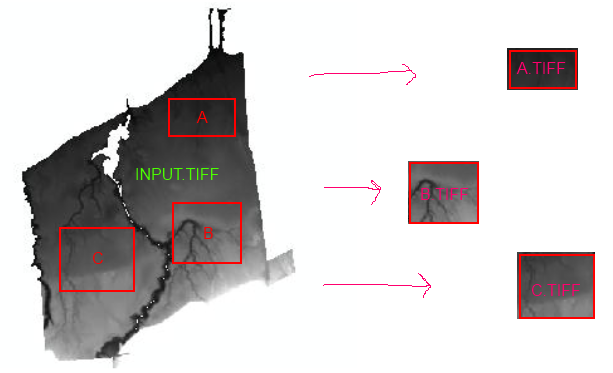 Reorganise your shapefile so that one shapefile contains one feature (A,B,C in your case) only

to create each output raster.

A simpler solution, although less elegant is simply use rasterio, gdal and numpy. Let's say that in our shapefile we have a column called 'column' containing the features names (our polygons), let's say that our polygons are 'A', 'B' and 'C'.

Now you have the image cut in pieces according to your features in the shapefile. Then, we just open the images and get the data.

Done! I said it is not elegant, there is a lot of room to improve, but it works.

Not the answer you're looking for? Browse other questions tagged shapefile gdal clip gdalwarp or ask your own question.

2
GDAL utility in Bash for loop (Ubuntu)
2
Clipping raster with multiple polygons and naming the resulting rasters
1
How to mask extract/clip many rasters by a .shp file in python gdal?