How to measure distance between points based on elevation?

I need to be able to measure distances between points, however the distance need to be calculated in relations to elevation. The points are homes of storytellers from the 19th century and the places which are mentioned in their stories. The distance therefore has to be "walking distance". A path along a valley will likely be shorter than a path over a mountain even though the actual straight distance is shorter. Attached is a screenshot illustrating my thinking. In the image, paths A and C would therefore be calculated shorter than path B. 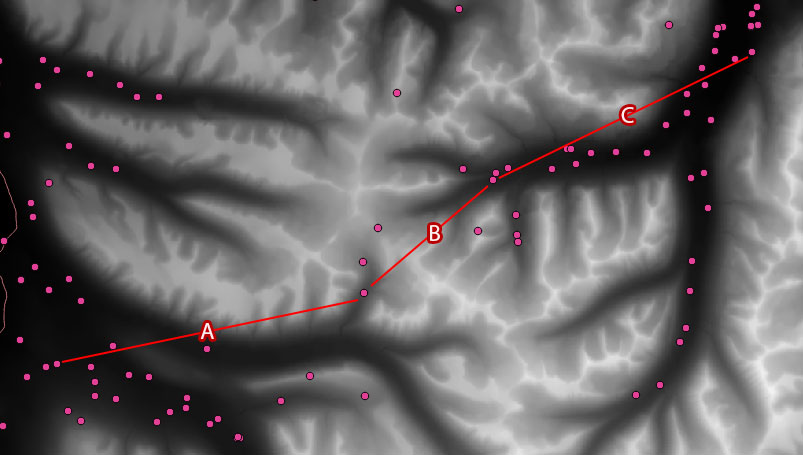 The points are from a CSV file but I also have a raster layer with the elevation data.

Achieving this goal is somewhat a basic task in GIS, however the method in QGIS might not be trivial. Your best chance is to use GRASS's r.walk function, which creates an anisotropic cost surface (dem+slope+other factors).

First, you have to create a friction surface as an input to r.walk. In your case it can be a single-valued raster (1.0) matching the extent of your DEM. You can create it with r.mapcalculator with the formula: A*0+1 where A is your DEM.

Now in an ideal case, you have the cost surfaces and the ending points for every cost surface. In theory you could find the least cost paths with r.drain, but for me, it ended up in an error (python couldn't import the QgisRaster library). If you run in the same issue, you can go with SAGA's "Least cost paths" algorithm. It will create a point and a line layer for every ending point with the cost surface (use the iteration button again). After you have all the lines, you can merge them into a single shapefile with SAGA's "Merge shapes layers" tool.

This method can be very slow with the increment of points, so if you have a lot of them, you might try to automatize the method with python. It will be still a lot of time to calculate (especially the cost surfaces), but you don't have to create tons of ending point layers manually.

Not the answer you're looking for? Browse other questions tagged qgis distance or ask your own question.

2
How to create buffers having regard to topography with QGIS