I'm trying to import a shapefile into a PostGIS database using the graphical importer. I just installed POSTGRESQL, and PostGIS. The GUI looks like this: 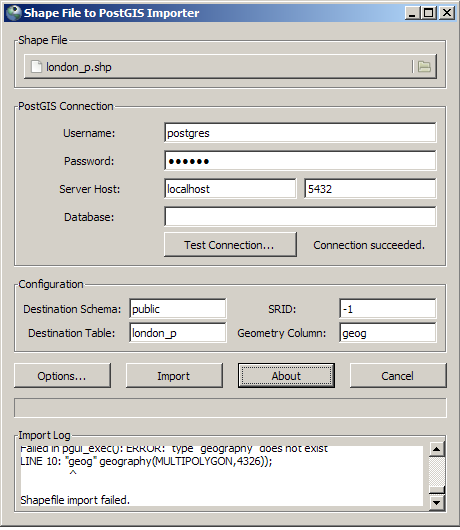 After testing that my database worked, I chose the shapefile that I wanted to upload, and then received a message that it had failed to import. I tried tweaking a few paramaters, but I'm not sure what I'm doing.

Are there any good tutorials or instructions about how to do this? I'm using Windows 7 64 bit.

Just adding a little more of my error message.

I've tried running @MerseyViking's suggestion, and then importing again. In the Geometry Column: box I chose MULTIPOLYGON and then tried to import the projected shapefile. The following errors appeared:

Then I tried ticking the Load into GEOGRAPHY column box in Options, and received the following error:

Both error messages are identical and I don't quite understand them.

The message you are getting is that 'type geography does not exist' This either means you did not install postgis correctly or you are using an older version? Geography data type was introduced in version 1.5

The clue is in the import log. Note that it says:

Also, I notice you don't have a database specified. You will need to create one and spatially enable it. There's a good chapter in PostGIS in Action that has a script that creates a database template from which you can create spatially enabled databases:

I too had the same problem and after investigation, I found that the issue was that I simply had not created the postgis spatial extension.

If this is the issue with you, then you can use the following Query:

I'm not sure about your question as I've never used that GUIS, but I have found that the SPIT tool in QGIS works quite well. You may want to try that and see if you still have a problem. If so, then it may be that particular shapefile? Have you tried multiple files?

If you haven't explicitly created a spatially-enabled database, that is probably the problem, as MerseyViking suggests.

It could be fixed after creating postgis extension in the database. The http://gis-techniques.blogspot.com/2015/09/fixed-shape-file-import-error-in.html illustrates the steps to create the extension.

Enabling the "Load into GEOGRAPHY column" checkbox resolved my problem. 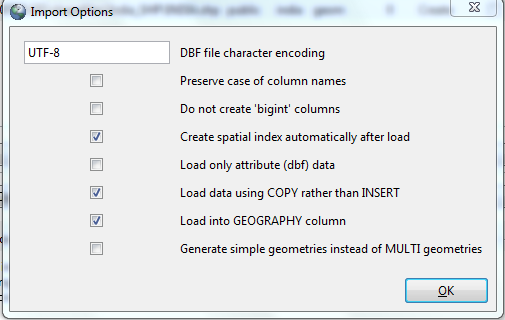 Not the answer you're looking for? Browse other questions tagged postgis shapefile import or ask your own question.

4
PostGIS Error: type "geography" does not exist
1
Import SHPs and DBFs to PostgreSQL in pgAdmin 4 on a Mac