Making world map to show where hole drilled through centre of Earth starts/ends on land vs water?

I am discussing drilling through the Earth with my students.

The classic cartoon version has a person drilling down in the United States and coming up in China, which has to be wrong because drilling from the northern hemisphere should come out in the southern hemisphere.

What I would like to get is a simple map of the Earth- single color background with continent / country borders only- with greyed-out / blued-out regions that don't have land on both sides of the dig.

I would like a map highlighting those regions of land that, when drilling through the Earth, end up on land on the other side. I want to view/highlight regions of land/land, land/water, and water/water.

The location on the opposite side of the earth from your point is called your antipode or antipodal location. If you want to produce an antipodes map on your own there is a simple relation to consider: Your antipodal location by lat-long will be identical to your location, except with the direction reversed. For example, the latitude of the antipode of 40° N will be 40° S. The antipodal longitude will be 180° difference between the two points, with reversed direction, resulting in a location at 74° W having an antipode at 106° E. x° N/S y° E/W ↦ x° S/N (180 − y)° W/E. So you could produce two maps and overlay them.

But there are also many examples of antipodes map on the internet to be found. Just google for images with the term "antipodes map". 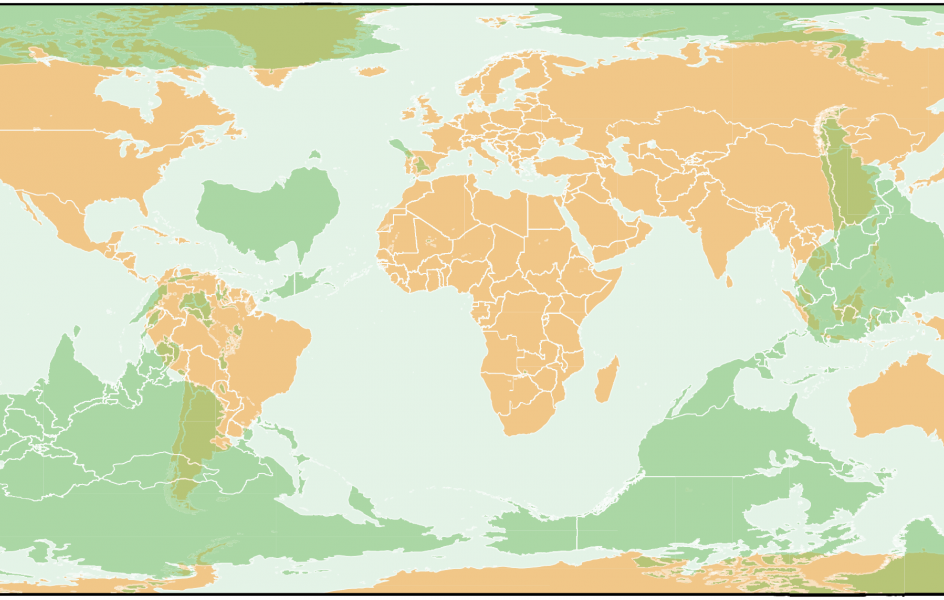 It is quite amazing how little chance there is to reach another land mass when drilling through the earth to your antipode. There are very very few cities that roughly lay antipodal to each other: like Buenos Aires - Beijing or Auckland - Sevilla.

Not the answer you're looking for? Browse other questions tagged cartography antipodal or ask your own question.

2
Where can I download a map of the world for kids
19
How much Water on Earth(USGS) : A Wrong Map representation?
25
Making map where overlapping symbols increase Opacity?