I am very new to web-mapping, so this question may be a little misguided.

I want to have a very simple web interface using OpenLayers (or even Google Maps if that will be easier) which can display a number of point and polygon tables that are currently in PostGIS.

I want this to be as simple (and as low maintainence) as possible:

What is the recommended approach for this?

The easiest way to set up an online map from PostGIS sources is using Geoserver. The Geoserver User Manual contains a good introduction for using PostGIS as a data source. You basically add a data store containing the connection information and after that you can publish any table containing geometries. Besides PostGIS, you can use many other data sources as well: 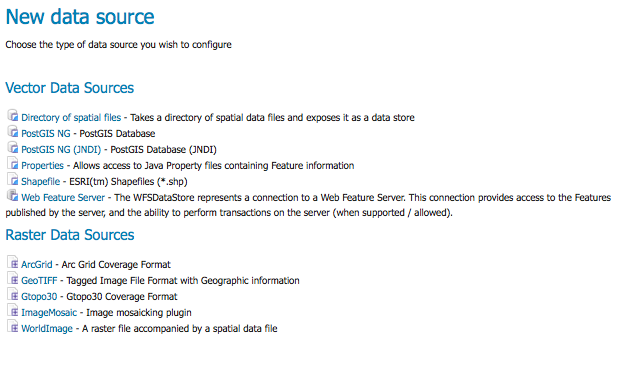 From inside Geoserver's web interface, you can also preview the layers on an OpenLayers web page. You can use the source of this preview page to build your own OpenLayers application.

Geoserver offers many styling options for both vector and raster data. For the start, you might be happy enough with just customizing some of the pre-made styles that come with the installation.

By default, Geoserver doesn't tile and OpenLayers doesn't request tiles. If you don't need high-performance, you don't need to bother with tiles anyway.

Personally, I think that OpenLayers is easier to use than Google Maps API and you'll be independent from Google. If you need a background map, you might want to look into OpenStreetMap instead.

If you really don't want a large middleware layer you could use TinyOWS (http://tinyows.org/trac) - I've never tried it but it claims to be small and fast. Plus it uses OGC standards so if you do decide to publish to a wider audience and it can't keep up switching to GeoServer or MapServer will allow you to keep using the same client code with no changes.

You can use any application that can server WFS protocol. With Openlayers you can easily use PostGIS data via WFS protocol. There are few FLOSS applications that can do this. For example, FeatureServer, Geoserver, MapServer ... If you are new to web-mapping i would recommend Geoserver because is very very easy to get it started.

See this Openlayers example with WFS.

Maybe the simplest middleware could be FeatureServer which can serve PostGIS data to most of the OL supported formats. It's easy to setup, and has support for simple spatial/attribute querys.

But, if you need something more powerfull Geoserver could be a viable solution.

You can feed json , kml amd wkt from postgis like st_asgeojson(),st_asKML() for PHP or JSP server script and then use openlayers ajax class for connect data source from your server

You could easily do this using Geomajas which would read your data from the database using either Hibernate or Geotools. This is all-Java, which may be a problem is you prefer other languages.

Well what you can do is to use the OpenLayers library and a server language to push all postgis geometry types into Openlayers. You going need:

With this you can very easily display them without any more middleware.

Not the answer you're looking for? Browse other questions tagged postgis openlayers web-mapping software-recommendations or ask your own question.

1
Web-mapping a PostGIS database
12
Options for displaying PostGIS rasters in OpenLayers
6
Options for PostGIS and Mapserver outputing SVG, and client with OpenLayers
3
Need advise on map site design (When to wms/kml)

21
How to create a simple front-end for a PostGIS database?
12
Options for displaying PostGIS rasters in OpenLayers
1
How to choose between Markers and Features for drawing Openlayers objects?
1
Simple WebMapping application with postgis Database
3
Using AJAX to run PostGIS SQL statements and display results via GeoServer
2
PostGIS: How to dissolve vector data
0
GeoJSON layer not displaying in OpenLayers 3