Ask Question
Asked 7 years, 8 months ago
Modified 5 months ago
Viewed 27k times
24
Closed. This question needs to be more focused. It is not currently accepting answers.

The community reviewed whether to reopen this question 5 months ago and left it closed:

Original close reason(s) were not resolved

Two days ago I asked a question about the internal storing order for the vertices of a polygon in ESRI shapefiles. That question was answered (Are polygons stored clockwise or counterclockwise in a shapefile?) and it was also answered in an old post (Polygon creation (Clockwise rotation or not))

But now my question is more general, and I don't know if it has an unique answer.

Is the clockwise order only for ESRI shapefiles or for general GIS formats?

And what about the internal representation for a GIS software?

For example, if I use QGIS and I read a *.shp containing polygons I suppose the internal representation of the outer bound is clockwise as in the original shapefile, but what about for all the file formats supported by QGIS?

And in the case there exists a file format with polygons stored in counterclockwise, if these files are loaded in QGIS, ArcGIS, etc., is the orientation changed internally, so if I read the data using PyQGIS, for example, the polygons are clockwise ordered?

Area computation is not an intensive task, so it will not slow my plugin so much.

But in the special case of QGIS, anybody knows if it stores the polygons clockwise or counterclockwise, regardless the order in the original source?

By now I'm working with ESRI shapefiles and the coordinates in layer.getFeatures().geometry().asPolygon() are stored in clockwise for the outer border and counterclockwise for the holes, i. e. as in the original *.shp.

Ring (boundary) directions are needed to prevent ambiguities for geographic coordinate systems that cover a finite surface, since the boundary would define two areas, one left and one right of the boundary along it's direction. Determining which of those two areas is the bigger one is possible, but still leaves the ambiguity.

Here is an overview on outer ring directions of polygons in various formats by their specifications: 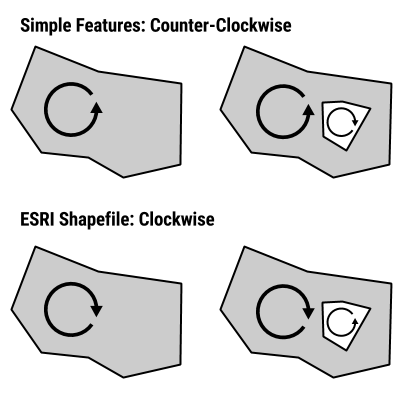 Deeper nestings, aka island-in-a-lake-on-an-island-... have to be represented as MultiPolygons (see figure 2.10 (4)), since there can be only one exterior border and deeper nestings than interior rings are not defined.

A polygon consists of one or more rings. A ring is a connected sequence of four or more points that form a closed, non-self-intersecting loop. A polygon may contain multiple outer rings. The order of vertices or orientation for a ring indicates which side of the ring is the interior of the polygon. The neighborhood to the right of an observer walking along the ring in vertex order is the neighborhood inside the polygon. Vertices of rings defining holes in polygons are in a counterclockwise direction. Vertices for a single, ringed polygon are, therefore, always in clockwise order. [...]

The order of rings in the points array is not significant. ESRI Whitepaper

Since multiple outer boundaries are allowed island-in-a-lake-on-an-island configurations are possible with this polygon definition. Topologically the island in a lake would be just another clockwise outer ring. Effectively this makes an ESRI Shapefile Polygon a Simple Feature MultiPolygon

If you don’t order the points correctly you’ll just have overlapping polygons. pyshp

For Polygons with multiple rings, the first must be the exterior ring and any others must be interior rings or holes. GeoJSON spec 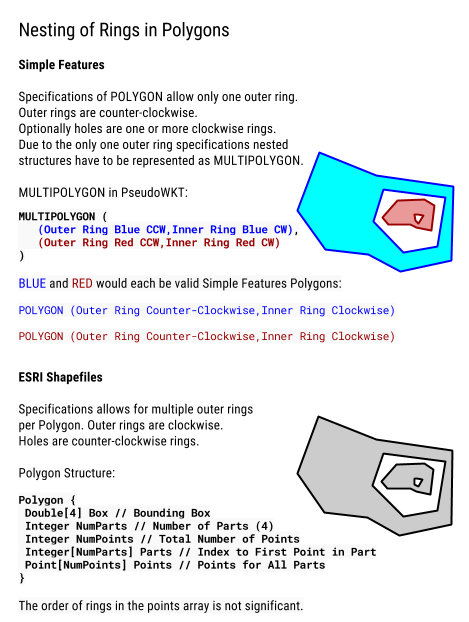 The mathematical reasoning on why winding orders of nested rings alternate is, that calculating the area with the shoelace formula (visual explanation) computes signed areas depending on the ring direction.

In general nested rings (interior boundaries) are considered holes and have the alternate direction of the outer ring. Their contributing signed area value is negative. Where as outer rings are positive. The total area of all ring features is the sum of all signed areas.

As implemented by ESRI see this Knowledge Base entry: What algorithm is used by ArcGIS to determine a polygon's area?

In the OGC specification, which can be downloaded here they state:

In the Oracle docs, it is clearly stated that exterior ring boundaries are oriented counterclockwise, and interior ring boundaries, clockwise. Likewise, in SQL Server Spatial, the geography datatype follows a counter-clockwise rule for the exterior ring, and clockwise for the interior rings -- see this Microsoft blog for more details. Postgis seems to allow it either way, for geometries, and has functions that will force a polygon's geometry to follow either a right or left hand rule, see ST_ForceRHR and ForceLHR. JTS/Geos seem to have followed the right-hand rule, i.e. a clockwise orientation of the outer ring, so it is all a bit unclear, really.

In general it makes sense for a geography datatype to force orientation, as otherwise it would be impossible to tell if a small polygon was just that or the inner ring of a whole world polygon. With a geometry datatype on a planar surface, this confusion cannot arise, as the outer ring and inner ring follow in order, and if there is only a single ring, it will be enclosing (no matter what the orientation), unlike on a globe, which wraps round.

I don't know that anybody will be able to provide a definitive answer for your question since each vector file format is different and each GIS, in terms of how they internally handle these data, will also be different. But I can tell you for certain that the clockwise ordering is not only for ESRI Shapefiles. There are other formats that use a similar designation of clockwise ordering for external rings and counter-clockwise for interior hole polygons. For example, the JTS vector polygon structure uses a similar format. In fact, it is stated here, that historically this was to be similar to the ESRI approach. I can also definitively say that no, not all formats have this requirement. For example, the GeoJSON format specifications make no such requirement about the ordering of vertices in their polygon format. The KML specification actually state:

The for polygons must be specified in counterclockwise order. Polygons follow the "right-hand rule," which states that if you place the fingers of your right hand in the direction in which the coordinates are specified, your thumb points in the general direction of the geometric normal for the polygon.

So the full range of options exist and are implemented out there. It's a wild world!

Not the answer you're looking for? Browse other questions tagged shapefile polygon vertices specification or ask your own question.

10
Polygon creation (Clockwise rotation or not)
10
Drawing boundary of set of points using QGIS?
6
Are polygons stored clockwise or counterclockwise in a shapefile?
7
Shapefiles - polygon type - is it in fact multipolygon?
2
Checking if vertices of polygon are in clockwise or anti-clockwise direction in QGIS?
5
How to rotate a marker line in a polygon ring?
3
Oracle spatial - check polygon vertices counter clockwise
2
Missing holes after exporting GeoJSON in QGIS
1
How to determine ring orientation from lat/long coordinate points?

3
How to clean up a polygon by removing vertices and lines within?
7
Shapefiles - polygon type - is it in fact multipolygon?
2
ESRI shapefile polygons
2
ogr2ogr Conversion Clockwise to Counterclockwise?
4
Polygons inside polygons QGIS