I am fairly new to projection mathematics and I usually manage to get things to work with copy-paste and trial-and-error but this time I'm lost ...

I am trying to map latitude (-90 to 90) and longitude (-180 to 180) coordinates onto pixel satellite images from Mappy, which uses a tiling system much the same as Google or Bing (more info). Unlike Google, Mappy doesn't seem to use Mercator projection but Gall or Braun (I found out by pasting a Gall map on top and saw that it matched). To be precise, they actually put a rectangular Gall/Braun projection of the earth and add a white strip on top to get a square (necessary for the tiling). 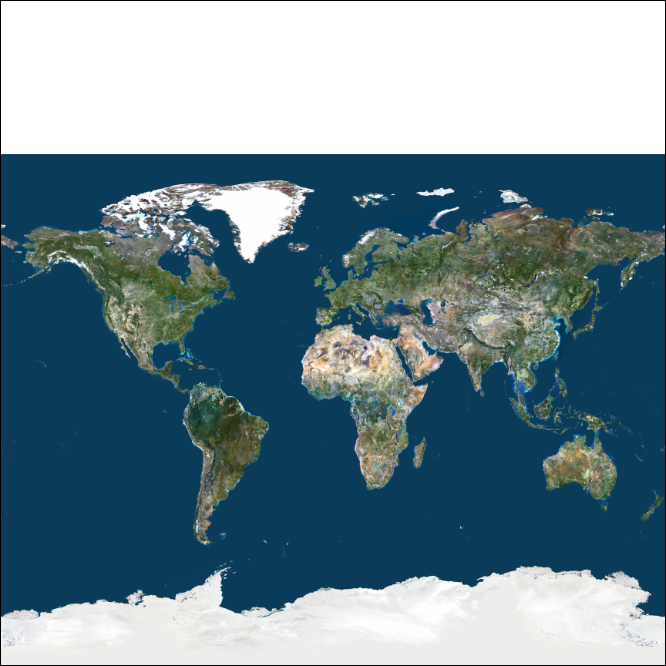 So I have a Braun map of the earth (let's forget about the white strip) and I want to know which pixel are the coordinates 0.0, 0.0 (Gulf of Guinea), for example. Where should I start ?

This is how I proceeded so far:

From Wikipedia I got that Braun projection works as follows, with R radius, λ longitude, φ latitude

I was previously working on a Mercator map (directly with the final equations lat-lon to pixel, as found here) and surprisingly the horizontal transformation from longitude to x-pixel was working perfectly with Braun as well. It appeared to be the inverse equation (plus the Greenwich offset) of the one presented on Wikipedia x = (λ+offset) / R instead of x = R * λ (as if was looking for λ and not x).

And so I tried to invert the vertical equation as well and finally got (with the parameters radius, offset and image size):

This all sounds very illogical but the weirdest thing is that experimentally I get very nice results in x and not crazy ones in y. Actually quite near sometimes. I guess it's only by chance ...

Browse other questions tagged coordinate-system or ask your own question.

12
Corner coordinates of Google static map tile
1
How do I convert Geo-Coordinates to Pixel-Coordinates on a Map?
2
Map projection lat, lon to pixel?
3
Help with “projected XY to screen xy” conversion algorithm?

5
How to do stereographic projection conversion (w.r.t. changing point of projection)?
35
Reprojecting raster from 0 360 to -180 180 with cutting 180 meridian using gdalwarp
3
Question Regarding Interpretation of Openlayers BBOX in 4326 Projection
5
Mercator: scale factor is changed along the meridians as a function of latitude?
1
Get pixel geo info according projection and map extent
6
WKT for EPSG:4326 with LON 0 to +360 instead of -180 to +180
0
Display longitude latitude points on xy raster file in meters and with projection of Albers Conical Equal Area