How to Normalize or rescale the NDVI raster image

I have processed my landsat band 3 and band 4 of different years to derive NDVI values the possible values of Normalized difference vegetation index is -1.0 to +1.0. The bands were atmospherically corrected by using dos1 correction.

NDVI was calculated for my study area and the values that have shown in statistics parameter of every raster layer property as minimum, maximum, mean and standard deviation respectively for each corresponding years are as follows:

My question here is that how can I normalize all the rasters of each year so that i could see the relative change in each year. In other words, I want to derive the relative index across the study area but not clear that which range should I chose for my case into which my raster values clustered equally interval index. How can I rescale these values

Next,Green vegetation fraction (GVF) was to calculated by using the same equation as Hu and Jia, 2010 used for city of south China , Guangzhou as mentioned equation-8 in paper also named as linear mixing model.

GVF = NDVI - NDVImin / NDVImax - NDVImin where NDVImin and NDVImax has been chosen as 0.05 and 0.70 respectively and these values that were derived by AVHRR 10-day composite data.

I want to normalize (or say transform if i am not wrong) all the values to 0-1 so as to compare the fraction of each pixel in green vegetation to examine actual role of vegetation. How can I derive the range for my region. Do I need to rescale it 0-255 first? Because this is a discrete data not a continuous ranges from -1 to +1.

Linear Spectral Unmixing by using the image based method of collecting endmembers were used in different study to derive the range of NDVImin (bare land) and NDVImax(dense vegetation).

I believe the tool you are looking for is reclassify. You can create classes for your different NDVI sets. Furthermore you have the option to choose different classification method such as natural jenks, geometric, percentile, etc. I am working on a similar study in which I have used 4 classes; barren, grass/pasture, woods, and forest. 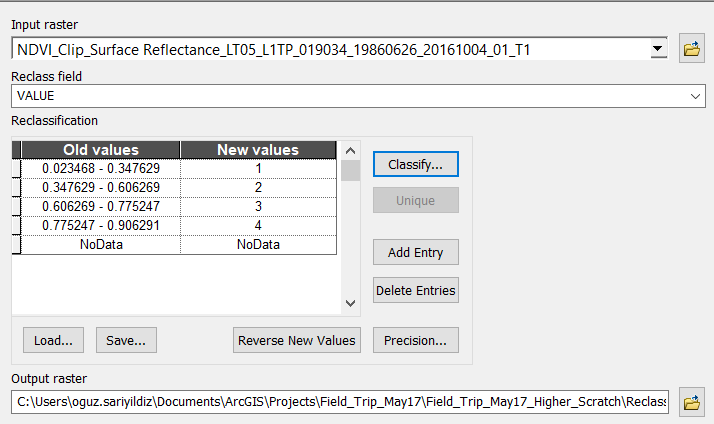 Not the answer you're looking for? Browse other questions tagged arcgis-desktop remote-sensing raster-calculator or ask your own question.

34
How to represent trend over time?
3
How to remove abnormalities from the Green vegetation fraction
0
Stretching (rescaling) Raster (NDVI) Values between -1 and 1?