What free programs should every GIS user have installed?

Ask Question
Asked 11 years, 2 months ago
Modified 2 years ago
Viewed 20k times
142
This question's answers are a community effort. Edit existing answers to improve this post. It is not currently accepting new answers or interactions.

What free programs should every GIS user have installed?

I'm not necessarily referring to ESRI extensions or open-source products, but others that increase your productivity and ability to handle GIS tasks.

QGIS. Although I do most of my analysis using ESRI based tools, QGIS is extremely fast for quickly examining a shapefile, and zooming/panning/reading the attributes.

I don't mean this in a derogatory way, as QGIS is also a wonderful open-source desktop GIS; but for quick file opening/closing it's wonderful and the quickest I've found. 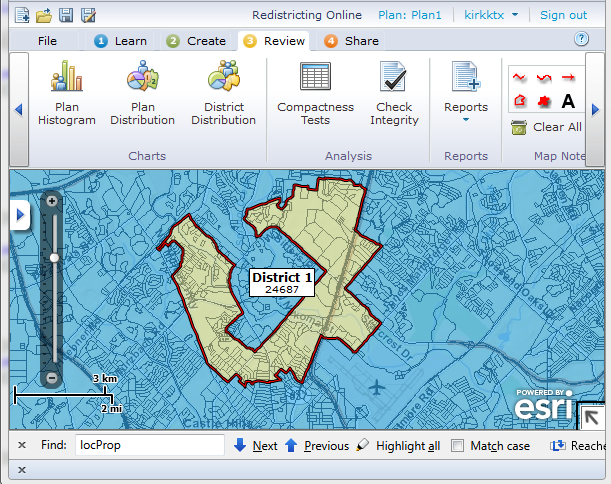 ... and I become curious about the mapservices it uses. I can fire up Fiddler and see what Urls it is accessing.

I can right click and copy the url and paste into a web browser, since we're dealing with REST ...

I notice that as I add census blocks to a district, it simply does a query; it does not make a call to a geometryservice to union the blocks into a district as I would have expected. From this I can infer that Esri is holding back on us: somewhere in the client there must be code that unions geometries - but there is no such capability documented in the web SDK api.

Since there's no message on the root page of their redistricting mapservice saying I shouldn't use it, I guess I'm free to use it in my own app ... or at least until they implement the idea I've suggested.

Benjamin already mentioned SAGA GIS, but just the name so I would like to add more info about this excellent SW: 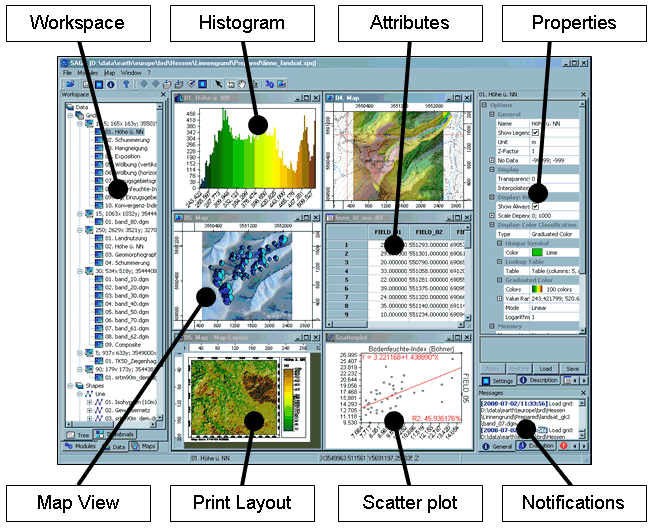 SAGA is also free and opensource like QGIS, but it is focused on raster data analysis and processing.

The standard modules are:

According to the users it can partially replace commercial tools like Spatial analyst in ArcGIS and some people say, that the hydrological tools are even better than ArcHydroTools.

In my opinion it is good choice for people who are not familiar with GRASS and who need user friendly and free solution which can share data with other GIS tools.

I use it together with QGIS and it works really nice - SAGA for raster data, QGIS for vectors and final map finishing and for quick mapping.

I use these two for cartographic purposes.

Gimp has good raster support (until they get huge/GB in size, then you run it on a linux OS!) and Inkscape handles vectors really well.

ColorBrewer is a great freebie for anyone who is publishing maps. Even though it's not an installed program, it's a powerful tool for picking effective color schemes, and downloads are available for various GIS software (see links below). There is even a new JavaScript version for those who can't or don't want to use Flash.

ColorBrewer allows you to pick effective, attractive color schemes based on number of classes, data types (e.g. sequential or qualitative), and many optional parameters. It also allows you to preview the color scheme with common features such as roads and city names, and export the scheme for (relatively) easy use in your software or code.

ColorBrewer's ramps can be installed to QGIS and ArcMap through symbol packages and add-ins.

With JTS TestBuilder, you can copy/paste WKT or WKB into the geometry inputs, and debug a geometry (especially if it is invalid and you want to know why) or explore spatial functions and spatial predicate operators, etc. Most of the functions developed in JTS trickle down to GEOS, Shapely, JSTS, NetTopologySuite, etc., so it is a good graphical tool to work with. 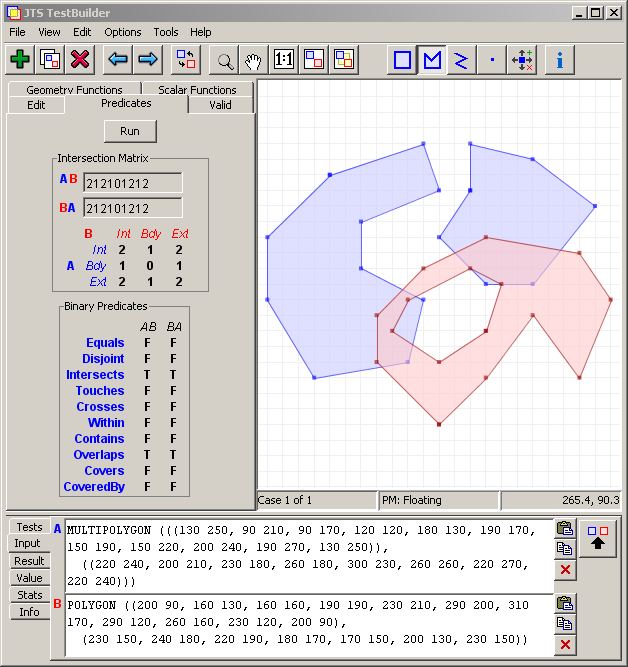 Inspect HTML and modify style and layout in real-time . Use the most advanced JavaScript debugger available for any browser. Accurately analyze network usage and performance. Extend Firebug and add features to make Firebug even more powerful.

Like it as you can edit webpages online and see the changes instantly without re-uploading files.

This with Fiddler (mentioned already in this community wiki) are very useful and time-saving tools.

For statistical analysis, there is R. An integration of R with ArcGIS provides the Geospatial Modelling Environment. Using the right libraries you can easily handle shapefiles and raster data in R
RStudio is a powerful IDE with debugging and improved data handling for R.

Color Oracle - a colorblindness simulator for Window, Mac and Linux. I use this for checking the "look" of my composed maps.

The Gdal command line tools are quite useful.

Sometimes I also use the xpath tool (provided with the gnome libxml2 library) to inspect xml/xsd/kml files:

You get the idea.

I wonder why MAPNIK has not been mentioned yet. It is also pluged in to QGIS. Very nice tool for easily making astonishing looking maps.

FugroViewer - Fantastic program for viewing LIDAR data saved in LAS files. It has 2D, 3D and profile view. You can symbolize dots with all attributes stored in LAS files along with RGB colors. 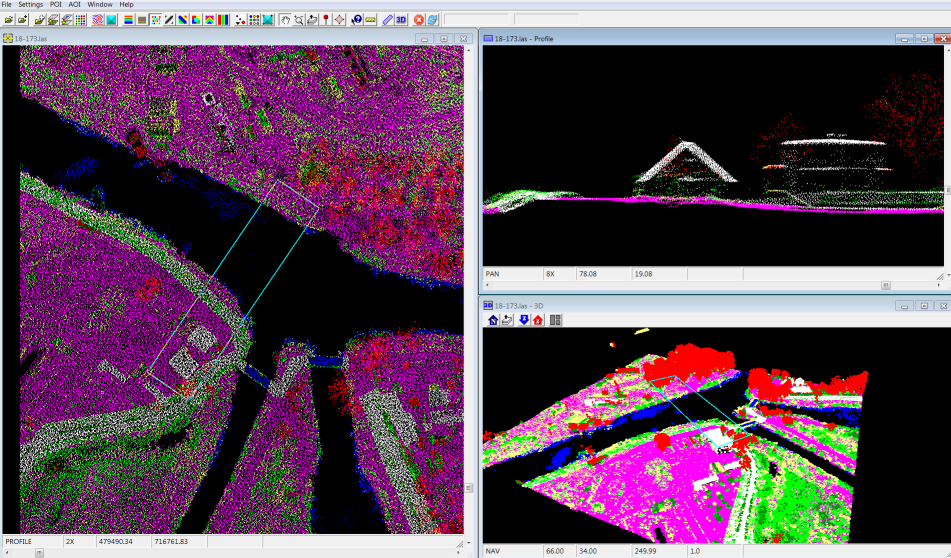 Notepad++ as well as the extra settings from TWIAV.nl especially the code highlighting. Came in very handy after changing server structures as all our .wor files were broken. One short find and replace later and everything works!

Self-link, but TileMill is very useful for exploring geodata, making pretty maps, doing analysis, etc. It's mainly for the presentation and exploration steps, while the heavy-lifting of analysis can be done in QGIS or similar.

Whitebox Geospatial Analysis Tools (http://www.uoguelph.ca/~hydrogeo/Whitebox/) is an open-source GIS and remote sensing package that has extensive analytical capabilities. It runs on MS Windows, Mac OSX, and Linux. It has a user-friendly and intuitive user interface, extensive embedded help, and the ability to make cartographically pleasing maps. 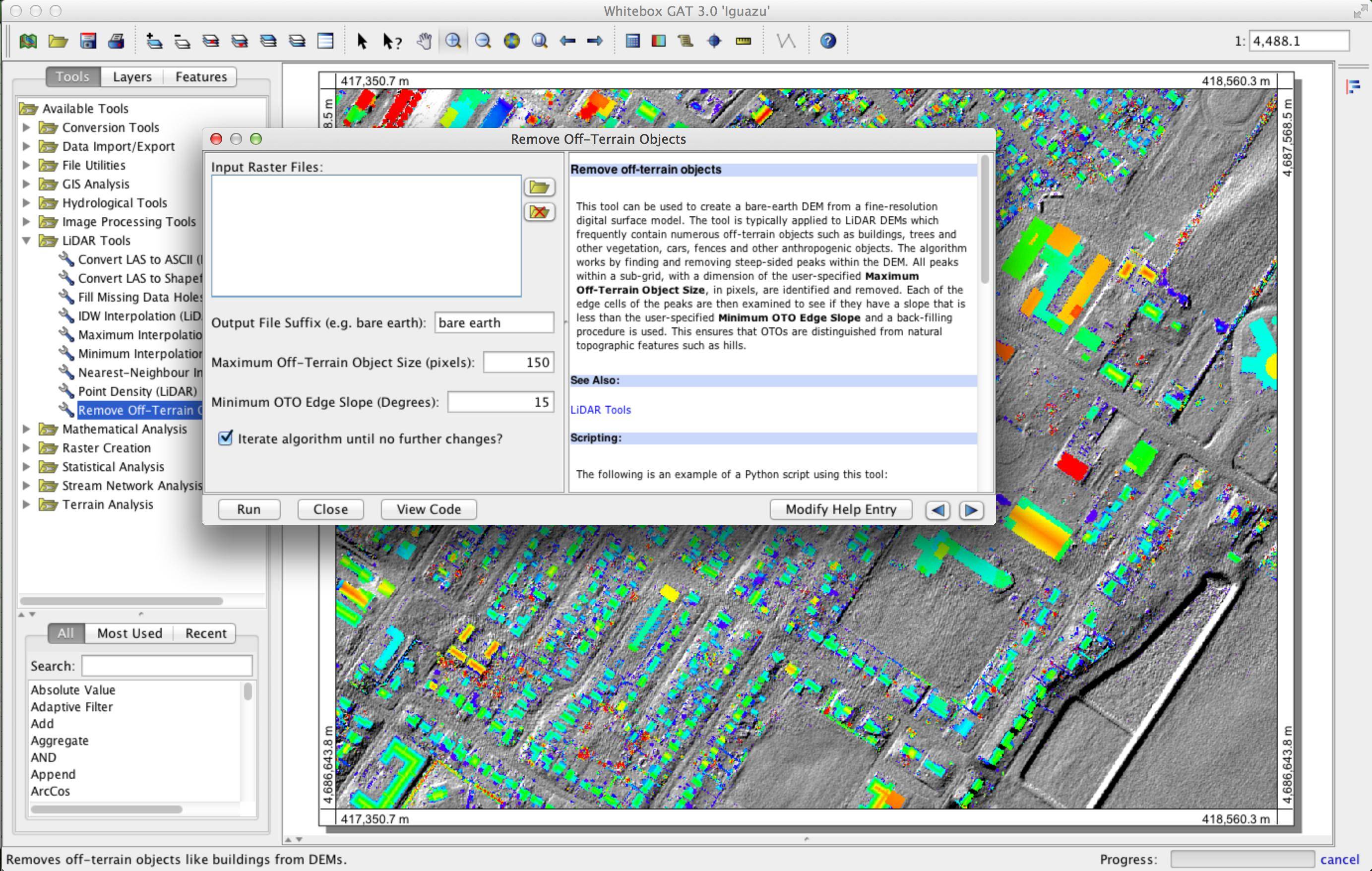 You can use : ArcGIS Explorer

With ArcGIS Explorer, you can 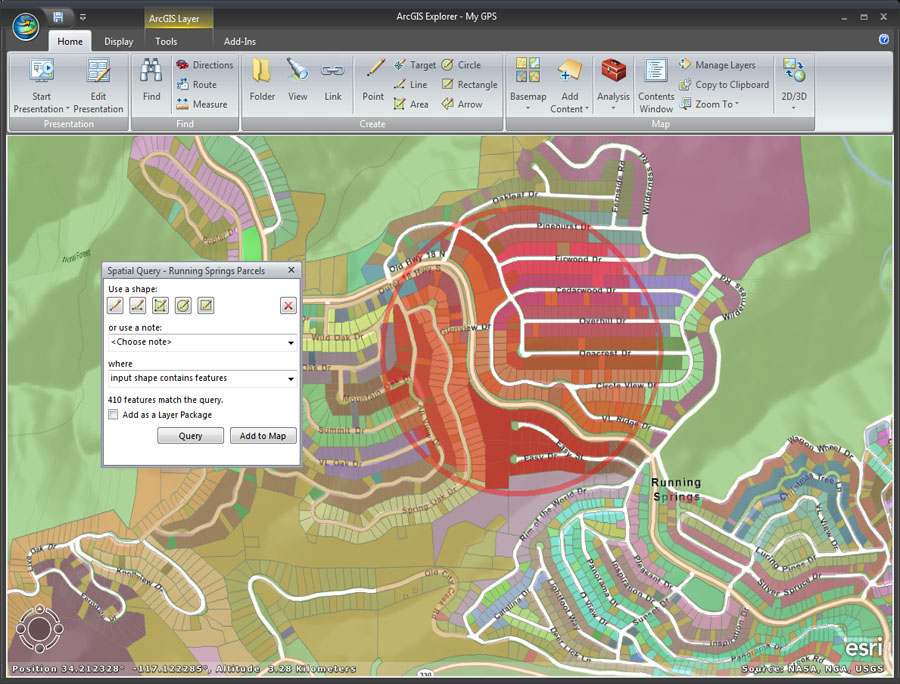 I'll add TileMill to the list. It's an easy way to put map on the web. Mapbox have a free plan that can do for most small users.

I must have missed it, but PostgreSQL/PostGIS is a must too!

Nobody mentioned about proj.4

Proj.4 is an open source cartographic projection library and tool that works hidden in the most of desktop gis, spatial databases and gis service software (web stuff). You can use it also very effective at the command line and beside of geotrans (which has military roots) it is IMO the open source tool to transform cooordinates between geodetic/geographic notations and has the possibility to use abstract datum description (like +datum=UTM +zone=32) or numbers like EPSG (+init=epsg:32632) as well as complex coordinate system descriptions like the Swiss Oblique Mercator Projection:

soapUI is a really good tool for testing SOAP and REST web services. It's designed more for building extensive test suites, but it's also a fairly quick way to run simple one-off calls to your web services.

My only contributions to the list (you've got most of the bases covered!) are: 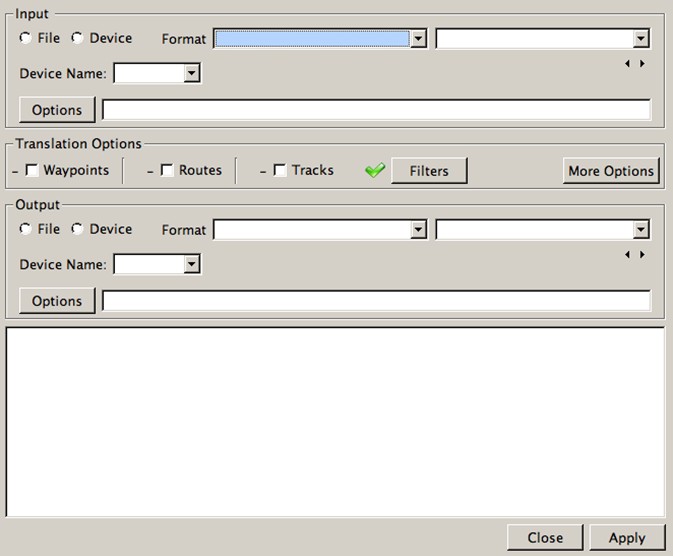 Hard to add much to this comprehensive list, but for web map development you might look at FlashDevelop for Flash/Flex/AIR (Windows only) and Aptana Studio 3 for Javscript etc...

If you want to work with SONAR data SonarWave Lite is a free solution. It was referenced on this thread on GIS SE.

I don't think anyone here has mentioned CartoDB which is a cloud based GIS tool for visualizing and analyzing geospatial data. Your data is automatically imported into a postGIS database allowing for complex SQL queries. It also has a robust set of tools to style your data (including Carto CSS), and you may choose base maps from other services such as MapBox.

I saw a few people mention TileMill but don't believe I saw anyone mention MapBox, the company that created TileMill and is doing some really awesome work with OpenStreetMap data and cloud based GIS. Both MapBox and CartoDB have free account options.

Speaking of OpenStreetMap, I don't think anyone mentioned that as a very good free/open-data source. The data is under an opendb license. Here are a few places to grab shapefile data from OSM:

TatukGISViewer is great for quick viewing of raster and vector files. I work with both ESRI and MapInfo which forces me to do tons of converting .tabs to .shps or the other way around. Tatuk is great because it handles both formats, just drag-and-drop and they all show up nicely. It also truly shows the geographic location of the data if two datasets have different coordinate systems (I don´t like ESRIs automatic compensationing).

Tthe FREE Double CAD XT is an AutoCAD LT-like program with more features then AutoCAD LT, simpler interface. Excellent for those GIS folks that have to interact with a lot of CAD data. Double CAD XT also claims excellent support for Sketchup - might be a good tool for those looking to integrate GIS, CAD & SketchUp data. 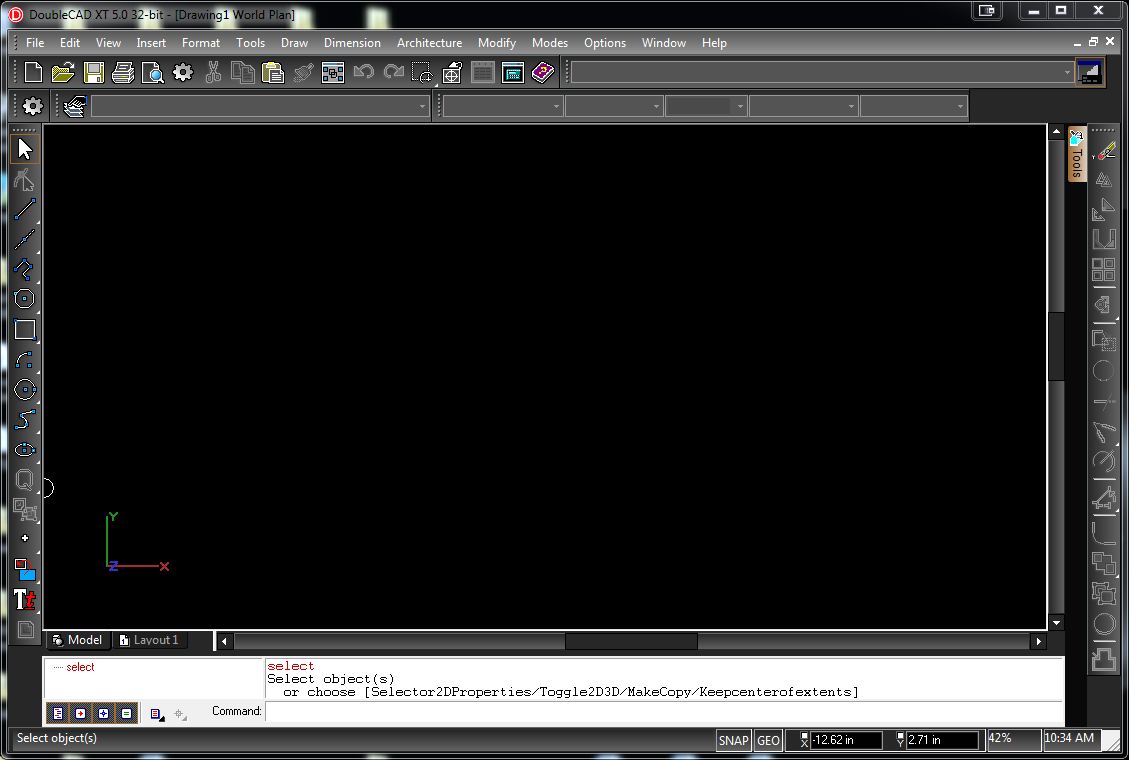 Here it is another solution: Geobide SDK a set of components for the development of gis professional applications. Free versions of the tools are available.

33
What software do you use as complementary to your GIS desktop/server?
16
What free or open source cloud-based software is recommended by/for the GIS community?
13
Opensource solutions for finishing maps
7
Is the software used in the "seabed UFO" video GIS software? If so, what is it?
4
Where can I find the finest granularity of 2010 US census population information?
6
COGOing Legal Descriptions using ArcMap
2
How does MYSQL accept the WKT representation of a polygon with holes?
5
Is there a standard st_relation_readable() function for translate DE-9IM strings?
3
SQLServer generating invalid WKT
0
Given a shapefile, how can I return the polygon containing a lat/lon location?
See more linked questions