Which raster resolution (DEM) can I get out of lidar data with variable grid width?

I have ASCII files in *.xyz format and want to generate a DEM out of it. According to the information about the data the *.xyz files are containing variable grid widths - from 1 meter to 4 meter. Following a small section of the data (converted to points): 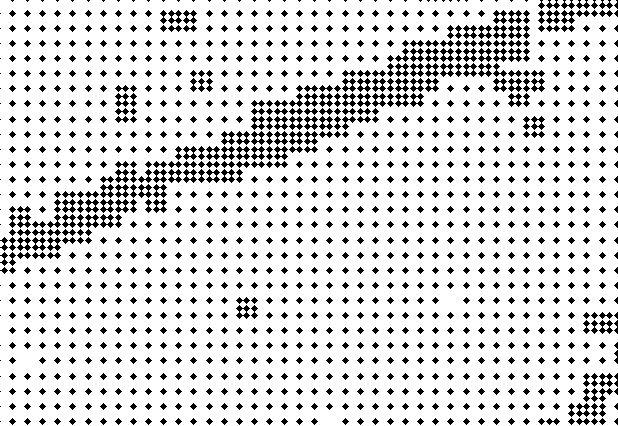 Is it possible to generate (with interpolation) a raster with a resolution I want (1,2,3 or 4 meter)? If I generate a 1-meter-raster out of it, how is the quality of the resulting raster in your opinion?

I use ArcGIS in general.

The concern that I have is that lidar is not a systematic sample, as shown in your example. This data appears to have already been gridded and then thinned based on terrain or vegetation variation. Given the short-distance variation and observed spatial pattern of the clustering, my guess is higher point spacing was retained due to vegetation (e.g., trees). One question would be if this point data is bare-earth or does it have vegetation retained?

If this data has, in fact, been pre-gridded then applying an interpolation with a higher resolution than the observed point spacing may propagate bias from whatever previous algorithm was applied. This could give you something akin the the derivative bias observed in 10m USGS DEM's.

This is, of course, all predicated on the assumption that the data was thinned, based on some sort of homogeneity/heterogeneity criteria, is correct. Other than for specific analytical purposes, I do have to admit that I am completely baffled as to why one would do this.

If you are not in an urban area, interpolating elevation from 4 meter point density to 1 m grid is quite safe, especially if your 1 m spacing reflects a larger roughness of your terrain (e.g. river bed). Make sure that you use an exact interpolator to preserve the elevation at known points, because LIDAR is precise and accurate.

You say you have ArcGIS, but you will need the Spatial Analyst or 3D Analyst extensions. I agree with the above comments. Use IDW or Natural Neighbor interp in SA. Set up the extent and the cell size using the environment settings. Could also build a TIN from these points then use the TIN to Raster tool.

Not the answer you're looking for? Browse other questions tagged arcgis-desktop raster dem lidar xyz or ask your own question.