How to generate a world file with rotation

My doubt is, the 2 last lines of the world file represent the coordinate of the center of the upper left pixel of the image, but if the plane is heading south when the image has taken this is will be the lower right pixel coordinate? What I'm doing right now is moving the four coners of my image to 0,0, rotating it by my heading, and moving it back, am I doing something wrong?

The formulas that i`m using to calculate the first four lines of the world file are those: 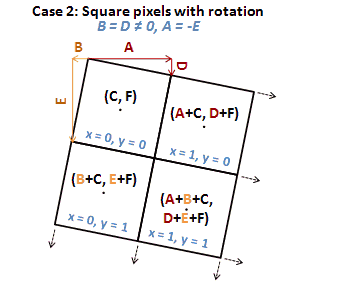 Just one detail: when I rotate the image, the program creates a image bigger than the original, to let the rotated image fit in.

My question is now similar to this one: georeferencing aerial photos with only known centroid

There are many conventions for image world files. What they share is the image-to-world transformation matrix. (Where they differ is in how the matrix elements are represented and in how the pixels are referenced: more about that at the end.)

In almost all cases the world file represents an affine matrix (not the full projective matrix). The affine matrix has six coefficients, often written in 3 x 3 matrix form as

Fortunately, you don't need to do much arithmetic to decipher this, nor do you need to learn any more math than you already know, because there is a nice simple interpretation of what this matrix means. It says that:

To create a world file, then, you have to work out the values of A ... F. But the solution is easy:

For example, if you would like to rotate the image 90 degrees counterclockwise around its origin, place the origin at the point (100, -200), and scale each pixel up by 30, you can easily work out (by drawing a picture, for instance) that

You can still get it wrong, depending on how your software intrinsically references the pixels in the image. The principal variations are (i) rows can go from top to bottom instead of bottom to top, placing the image origin in the upper left corner and (ii) the image could be referenced by (row, column) instead of (column, row). The first one causes the image to be reflected across a horizontal line while the second one reflects it across a diagonal line. If you get either of those two errors, you will immediately see what's going on and will know what to fix. Documentation can be so obtuse (or non-existent) that in practice I just try it, deduce the convention from how the image turns out, and proceed accordingly.

Note that rotations by non-multiples of 90 degrees and differential rescaling require resampling and therefore are not universally supported. This frequently limits the allowable matrices to those with B = D = 0 and |A| = |E| or A = E = 0 and |B| = |D|.

The last two lines should always be the upper left pixel's coordinate values, regardless of flight path/orientation.

First of all, world files (Wikipedia article) do not contain map projection information, so you have to know the projection of your image and then tell QGIS which one to use.

Secondly, a lot of programs ignore the rotation/skew parameters of the world file, so even if you set them, there is no guarantee they will have any effect (I don't know about QGIS though).

Perhaps you should try using GeoTIFFs instead, they are much more precise in terms of georeferencing.

The mathematical answer (affine transformation of whuber post) is given in https://stackoverflow.com/questions/2755771/affine-transformation-algorithm

M, the affine transformation matrix can be calculated with homogeneous coordinates.

and this resultant matrix contains the parameters the worldfile (A,B,C,D,E,F)

This processing can be done in Python with numpy or scipy or GDAL : see https://portailsig.org/content/les-transformations-affines-avec-numpy-ou-la-signification-geometrique-d-un-fichier-worldfil.html (in french but with a lot of figures and python codes so it is relatively easy to understand). We must also take into account the parameters of a worldfile for the position of the 0,0 point of the raster: lower left for affine transformation, upper left for gdal and middle of the upper left pixel for worldfile) 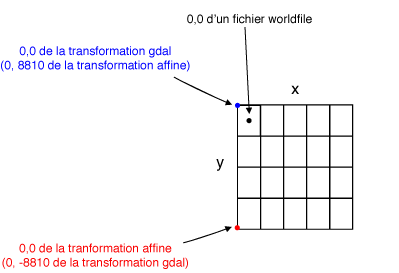 Qgis support without problem rotational factors in the worlfile (parameters B and D different of 0). It use GDAL

Not the answer you're looking for? Browse other questions tagged raster georeferencing or ask your own question.

7
Georeferencing aerial photos when only centroid is known using ArcGIS for Desktop or ERDAS Imagine?
4
Rotate & Shift Image with QGIS Georef Plugin
1
Create GeoTIFF images from TIFF image using the coordinates of the four corners
0
trying to build world file for images based off extent rectangle generated from centroid in python

6
Coordinates of upper left corner in the world file?
5
Display Georeferenced Images on Android
2
Rasterization of point vector in QGis: how to align the resulting raster to an existing one?
1
The raster or shapefile exported from Ecognition does not align with the original raster when I open it in QGIS
1
Getting geo transforms (affine) without a TIFF reference image
1
Georeferencing single drone image from metadata (gimbal angles, flight angles)
1
Reversing geo-referencing formula of a GeoTIFF using world file information