I've been trying to run a viewshed analysis in ArcGIS 10.1 and everytime I've tried running it, it crashes the whole program, with no error. See the image below.

I've made sure it has OFFSETA field in right format, that it is one point only in the shapefile, and also that 3D analyst is ticked on.

Additionally I have also tried to run it as a Python script but it still produced the same result.

The elevation and XY distances are the same unit, in metres, though I haven't specified metres in the OFFSETA column. My input layers are a DSM raster that is quite big (85000x85000 roughly, 27.23 GB), and a point layer that is one point only. They are both in British National Grid projection. Im using ArcGIS 10.1 SP 1 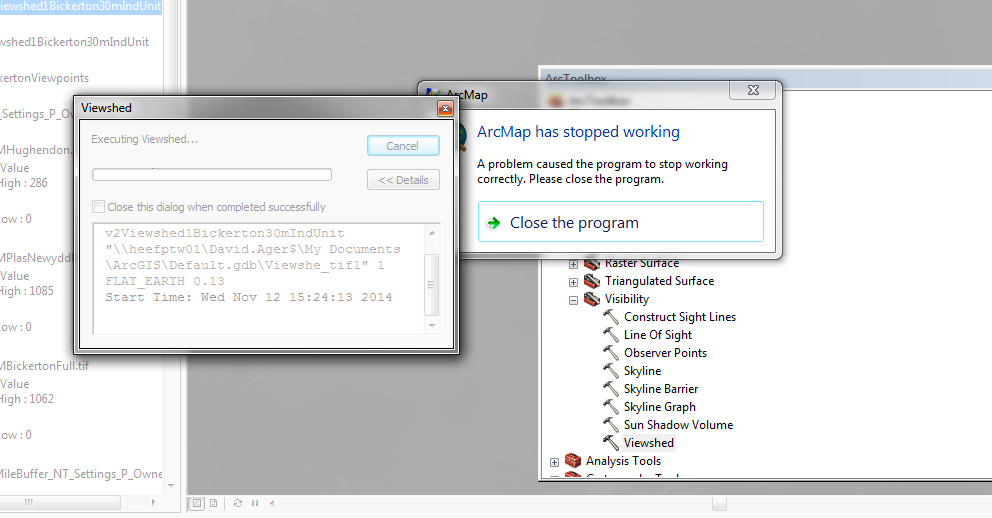 I was just having this exact same problem. The whole ArcMap program would crash as soon as I started to run Viewshed and no error was returned. I tried the tip offered by @PolyGeo to try a smaller dataset, so I clipped my DEM to a smaller extent and ran the tool again with the new, smaller raster. This time it immediately worked without a problem. (yay!)

One related question to the comment offered by @radouxju: In many of the threads I came across trying to solve this problem, someone suggests making sure that the elevation (Z) and XY distances are in the same unit, but as far as I can tell, this isn't an issue if you use the Z factor to compensate for different units. My DEM had XY units in meters and Z units in feet, but I entered a factor of 0.3048 to let the tool convert units on the fly.

I have two suggestions:(1) Place your inputs in a folder on your desktop. The point is to have a short folder path. Your inputs will be a raster DEM and a point or polyline shapefile. (2) Avoid using numbers or capital letters when naming your output (the viewshed). This has worked for me so far.

Not the answer you're looking for? Browse other questions tagged arcgis-desktop arcgis-10.1 3d-analyst viewshed or ask your own question.