Can anyone instruct me on the correct way to union/intersect two different layers containing polygons so that a third layer is created containing the attributes of the non-overlapping regions from each original layer and a new 'class' or feature for any regions that do overlap? I am using ArcMap 10.2.2

For instance, see in the image below: 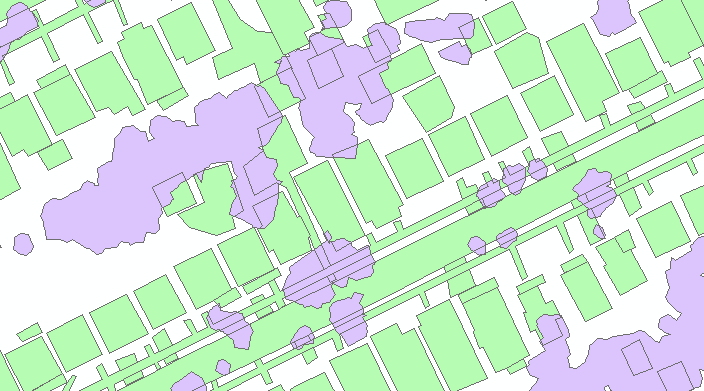 I want the areas that overlap between the purple and green polygons to be considered a new dataset. I know the "Intersect" tool in ArcMap would produce this "overlap" dataset, but only after stripping away everything else right? On the other hand "Union" produces what we see below. Is there anyway to do exactly what I am talking about? Or do I have to do an intersect, generating an isolated "overlap" layer, and then intersect this "overlap" layer with the other two (one at a time) to finally end up with three different layers separated into the information I want - after which I would merge them back together.

After running your Union, open the resultant Attribute Table and I think you will see that all polygons of overlap have IDs from both input feature classes that are >= 1 whereas where there is no overlap one or other ID will be 0.

Not the answer you're looking for? Browse other questions tagged arcgis-desktop arcmap arcgis-10.2 intersection union or ask your own question.