I am doing a geometric network project, and am running 3 trace process within a model to find connected features to a set location on the network. Each trace function wants to output its own group layer of all participating feature classes in the geometric network, with each group layer containing the selected features of the 5 feature classes from that operation (eg, 4 valves to turn, 2 impacted hydrants, 7 selected orphan junctions, ect.). The first operation's selected features are copied into the second, but the third has a unique section set based on a downstream trace, so I really only need the second and third group layer outputs.

Is there a way to apply these individual selected features from the two group layers to the original group layer or combined them into a single group layer?

I believe I would need them in one group layer because I need to be able to publish the mxd and model to a server, have the model run, and be able to display valves that need to be turned to isolate the selected point, and the mains, hydrants, and buildings that are impacted.

Here is an example of the different selections from the group layers, top being the second trace, middle is from the third, and bottom is the original group layer used for data viewing, editing, ect.

Is there a way to have these apply to the original group layer?

Also, the features from the layers are all referencing the same data source. 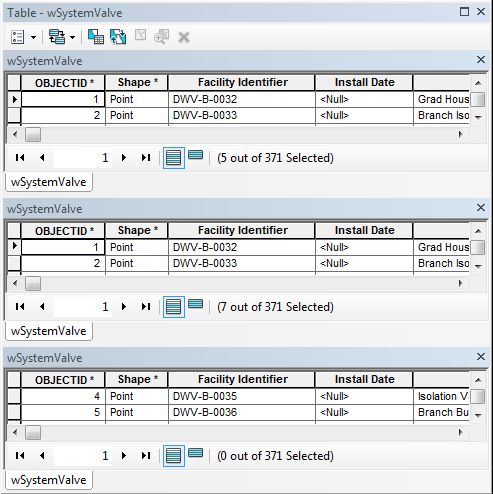 Also, i know a bit of arcpy programming, and can find the layers that contain selected features, but am stuck on where to go next. Is there a simpler way then just doing a bunch of select by locations to apply the selections to the original feature classes?

A bit late but I have figured it out. Arcpy has a function within Describe called FIDset which looks for selected features. Basically I put all participating group layers into a list, then separated each feature class within the group layers into another list, created empty sets foreach layer I needed, and looped through them checking if the FIDset was empty or not. If it wasn't, those FID's were added to a set based on they layer name and used later to create a SQL statement and reselect all the FID within the set.

Not the answer you're looking for? Browse other questions tagged arcgis-desktop arcgis-10.2 geometric-network group-layer or ask your own question.