Defining next object in street with android? [closed]

Ask Question
Asked 6 years, 3 months ago
Active 1 year, 4 months ago
Viewed 80 times
0
Closed. This question needs to be more focused. It is not currently accepting answers.

I want to put objects in a map and discover which is the closest object from me, supposing that I'm in a moving car with my cell phone. Thus, to define the closest object I need to take the orientation of the movement and the street into account. The following figure illustrate the situation: 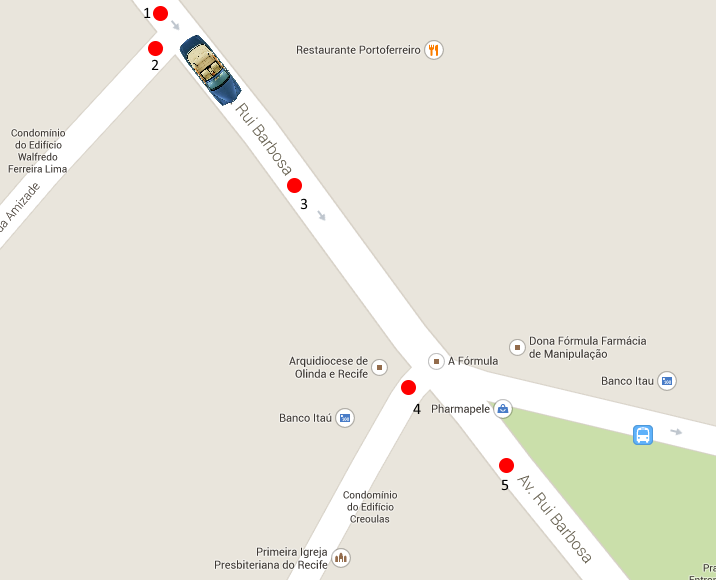 Does anybody know how I can obtain the closest object to me (considering that I'm moving) according to the rule I just mentioned?

If you don't know an API, but know what kind of concepts and stuff I need to study would be helpful, because I'm new in android and geographic systems development.

You should work with device sensors to determine device direction for which Android does provide an API as well. You can refer http://developer.android.com/guide/topics/sensors/sensors_overview.html

To calculate the closest object, you will have to make an algorithm which keeps on checking distance between your position and every other object in a given proximity.

Not the answer you're looking for? Browse other questions tagged android or ask your own question.

6
What type of OS is best for ESRI mobile Development?
7
Looking for an Android Object-relational mapping programming layer, PostGIS oriented
3
Overlaying layers with different projections on Android
2
Android Application with offline maps
1
Starting with OpenStreetMap for Android
3
GPS Live tracking with qgis android
1
Working with GeoServer and OpenLayers in Android?
1
ShapefileFeatureTable cannot be converted to FeatureTable with Android?