Is the Intersection Operation Commutative?

Hope this figure is explicit enough : 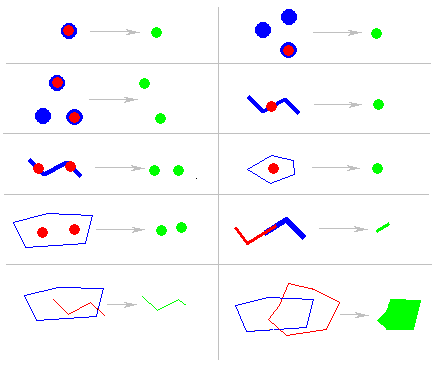 Just like set intersection, geometric intersection (which is essentially an intersection on two sets with spatially defined bounds) is both commutative and associative, e.g. (A ∩ B) ∩ C = A ∩ (B ∩ C) = (C ∩ B) ∩ A = C ∩ (B ∩ A).

In practice, software often uses the order of inputs to determine how attributes are associated with the output; but the spatial output geometry should still be the same regardless of input order.

Also be aware that your output will depend on which coordinate system and projection, if any, you use to carry out the operation. While this will not change the commutative and associate properties, order and grouping might be used to select the projection used for the operation(s).

Mmmm. I too thought it obvious that A ∩ B = B ∩ A, but then Kirk's comment got me thinking. So here's a theory. Feel free to shoot it down in flames!

In this scenario there are two polygons, A (red) and B (blue). The red dots represent the smallest grid precision: 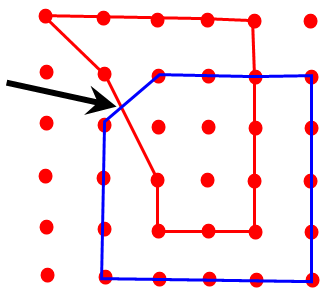 According to my calculations, they intersect here: 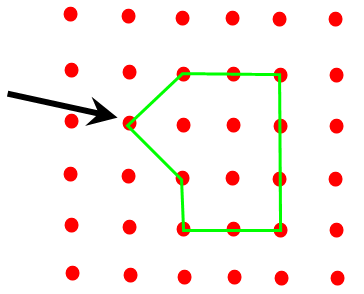 Notice how the intersection point snaps to the nearest grid, because that's the smallest precision allowed. In this case the order doesn't matter, and A ∩ B = B ∩ A 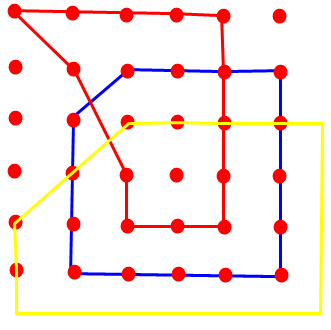 The intersection of (A ∩ B) ∩ C is as follows: 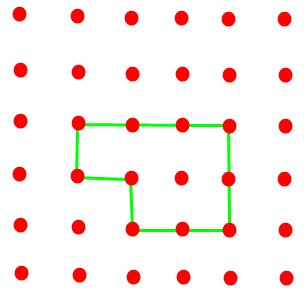 And that's because the nearest grid point to the intersection of A and B is as already shown, and overlaid with C is can give that result (my rough sketch is not exactly square so it may not look obvious at a glance). However, (A ∩ C) ∩ B gives this: 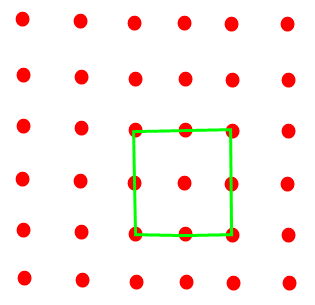 So: I would argue that there is no difference with just two polygons, but there could be differences with three or more. With a large precision the differences would be tiny, but I believe they could exist.

Does that look correct, or can anyone pick holes in the concept?!?!?!

Not the answer you're looking for? Browse other questions tagged geometry overlay intersection or ask your own question.

2
Is this Intersect or Union algorithm associative?

3
polygon map overlay algorithm
1
I am looking for a library or API to do vector overlay for two map layer (shapefiles or GML files)
2
Intersecting Layers Returns Empty Collection Despite Visible Intersection
0
Is it possible to draw a point interactively and execute an intersection operation (drill down) to identify spatial relationship with other layers?
4
PostGIS intersection function
1
Using intersection tool with geodatabase and vector layer in QGIS
1
Calculate polygon intersection without boundary intersections
0
Geometry issue when doing intersection
2
Intersection of touching geometries returns a polygon
1
Performing identity operation in PostGIS?