How to decide how to “stretch” raster imagery?

I have to symbolize a digital elevation model. ArcMap offers many different setting for stretching the symbology which all give widely different results. Some stretch methods symbolize the data so that there appears to be more elevated areas than other stretches.

Without knowing too much about the area I am symbolizing, how can I be sure that I am using a correct setting? I don´t want to give the impression that the relief is higher than it really is, and I also don´t want to make the area unrealistically flat. 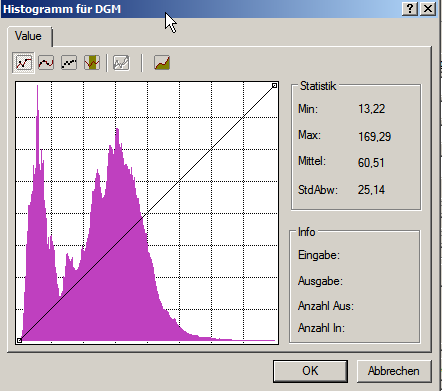 I can see that there are two peaks. The first peak for the flat areas, the second peak for the higher areas. In the default symbology, the flatter areas are very pale.

What should I be aiming for here? To show as much relief detail as possible? or to give a realistic interpretation of the relative heights? If I stretch the lower values, I can show more detail in the flat areas..but to the detriment of the higher areas. How would other specialists visualize these data?

I certainly wish that more people would be as concerned about the display of digital elevation data as you are. I see so many examples of poorly rendered DEMs that it's somewhat disconcerting. So thank you for raising this question. First, to answer your question of "how can I be sure that I am using a correct setting", I don't think that there is such thing as a single correct setting. Like all visualization, we are simply striving to create an effective display for communicating information relevant to the particular application. While there may be many suitable choices for visualization, there are certainly some that would be far less suitable. I think there are two issues at play here that you are perhaps mixing together. The first is the issue of scaling and the second is the issue of an appropriate colour palette.

In terms of when to scale your DEM data, the answer lies in the tails of the statistical distribution. Whenever your have a DEM where there is a long tail either on the lower or higher end (or both) you need to scale the palette. Tails, on either side, are fairly common in DEMs. Sometimes they can tell you something useful about the topography, e.g. the presence of deeply incised valleys or a landscape punctuated by high peaks, but often the tails are not that useful (e.g. off-terrain objects in a LiDAR DEM). You might consider the information contained in a DEM visualization as being related to the number of colours in the palette that are used to convey differences in elevation. When your DEM has a tail in its distribution you are spreading the same number of colour bins across a larger region of elevations, much of which doesn't contain significant amounts of elevation data. Instead, you want to focus those colour bins in the area of actual elevation. This is because the 'information' contained in the DEM is largely going to be washed out by stretching the colour palette so widely. In your case, your DEM has an extended upper tail. Unless you want to convey information about those rare peaks in the landscape for your application, I'd say you're entirely justified in scaling the palette. But keep in mind in doing so that a linear scaling (i.e. truncation at a min and max elevation) is usually preferable for elevation data.

Next is the issue of the palette or colour-ramp. In your question, you relay concern that you don't want to convey mis-information about the amount of relief in your DEM, i.e. that you don't create a visualization that makes your flat landscape appear like the Himalayas. Again, I wish more people took this into consideration. I'd say that this has more to do, however, with choosing an appropriate palette for your DEM than the scaling. GIS usually have one or two options for colour palettes that are obviously intended for displaying terrain, but this need not be the case as there are many appropriate palettes that are more suited to particular landscapes and applications. For examples, see this answer to the related question. To ensure that you don't relay the sense of too much relief in your flat landscape, I'd just make sure that you don't use a colour palette that ends with white, which is usually associated with mountainous terrain. I guess there is the psychological association with snowy peaks in such cases. You can still choose a palette that has several meaningful colour transitions however, which maximizes the information content. Another way to reinforce the notion that you are dealing with a flat, and not mountainous high-relief, landscape is to overlay a hillshade image. This can go a long way to help create a very effective display.

Consider the following example. Here is a detailed LiDAR DEM of a small area in a very flat landscape of undulating terrain. 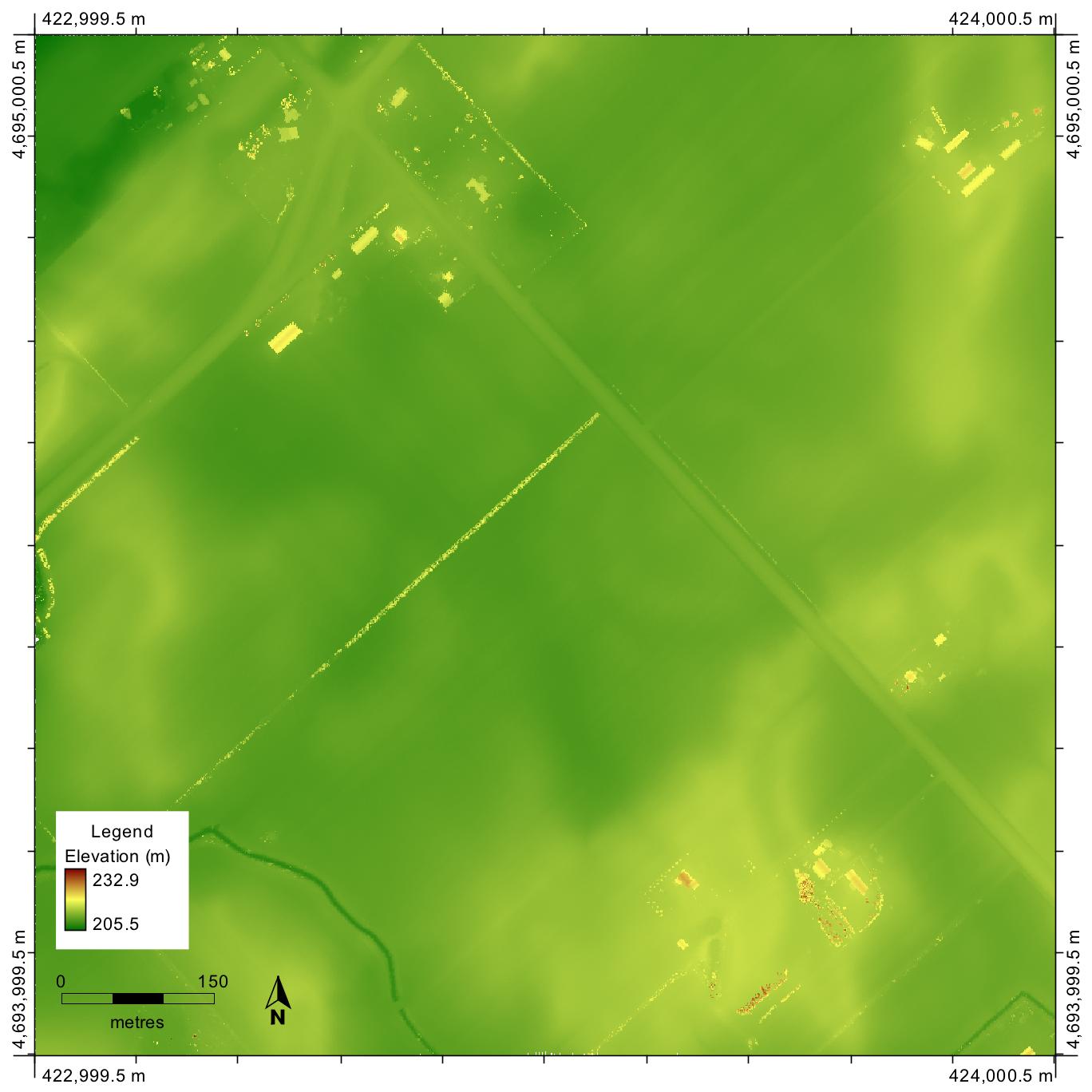 The DEM contains off terrain objects (some may call it a digital surface model) and they are washing out the statistical distribution with a long upper tail. There is also a lower tail that is associated with a deeply entrenched channel. The result is that the DEM visualization is not particularly effective for applications where I want to relay information about the undulating topography. 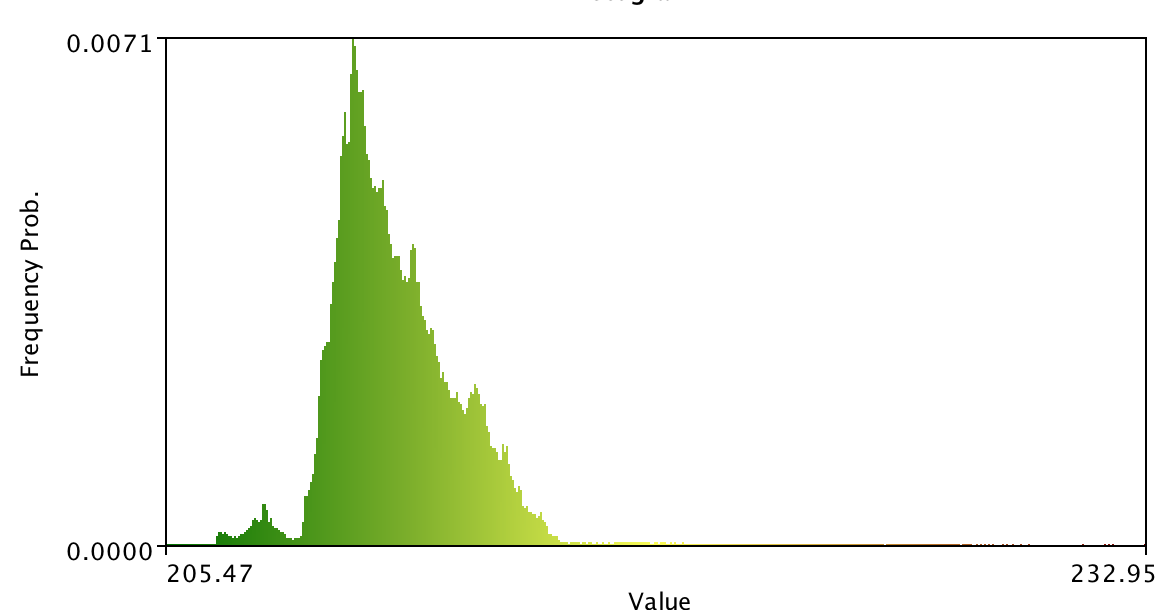 The actual terrain has a maximum elevation of about 216 m (i.e. the ~30 m of relief in the DEM is dominated by those off-terrain objects), so I scale the palette, choose an effective palette with plenty of meaningful colour changes (without white!) and transparently overlay a hillshade image: 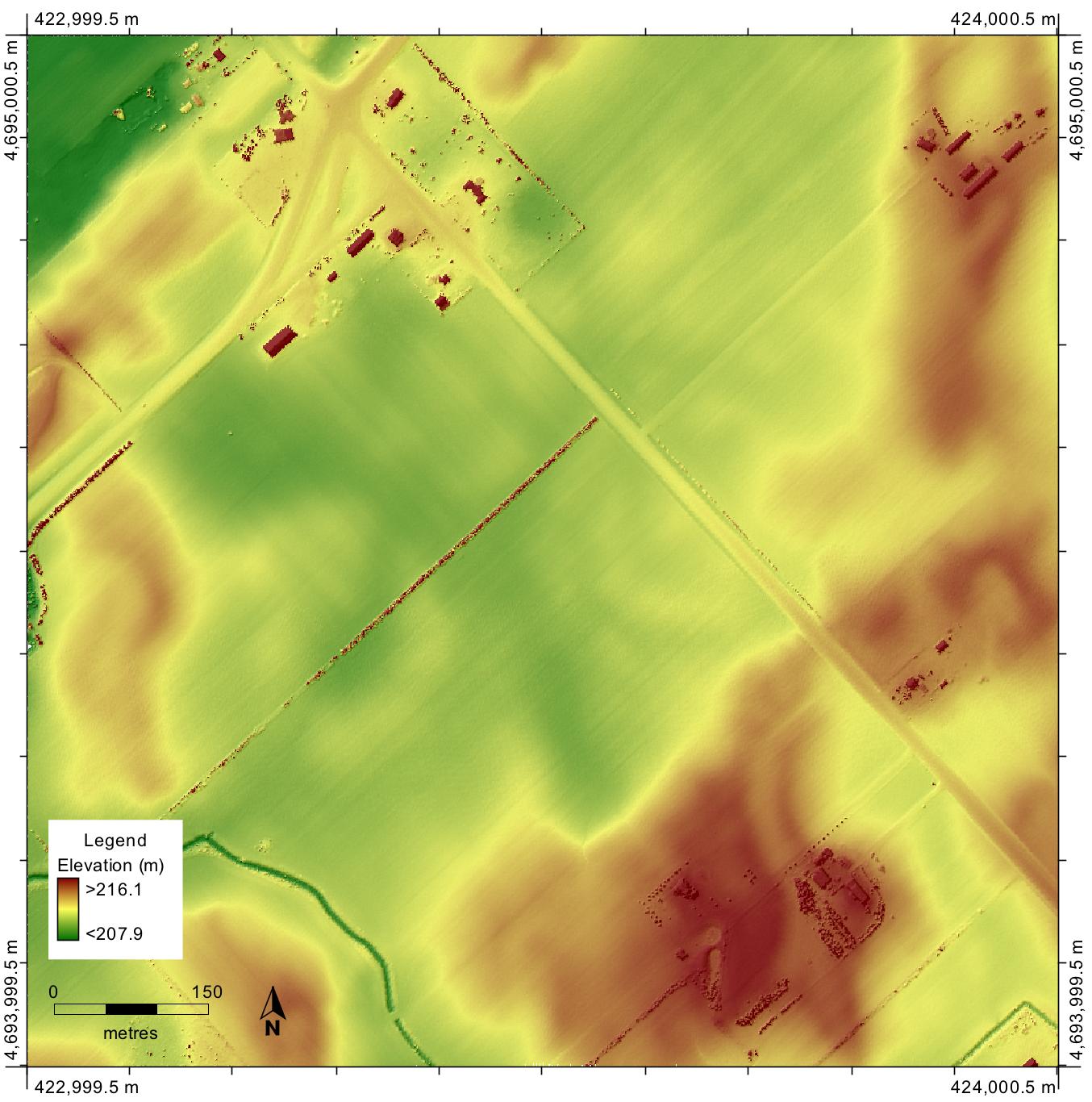 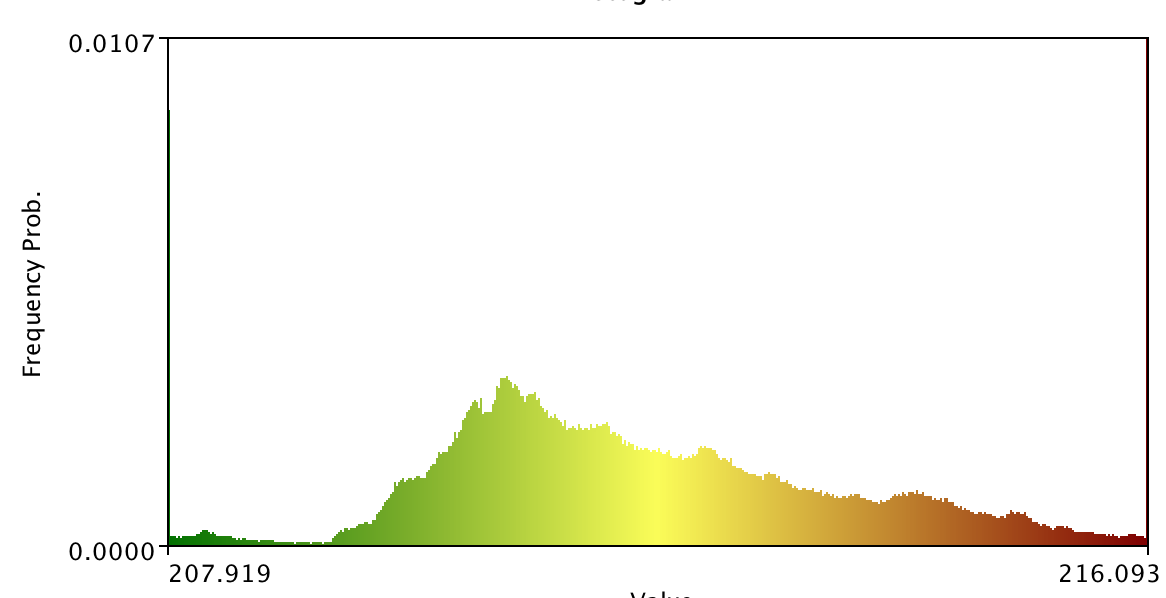 I don't think anyone is going to look at this DEM and think they are dealing with the Canadian Rockies, but at the same time, they will be able to concentrate on the meaningful topographic variation associated with the low-undulations in this agricultural landscape. You'll notice that I also chose to leave in the effects of the deeply incised channel, in this case because being an agricultural landscape, this is probably meaningful. And to emphasize the effect of the colour palette, here's the same DEM but displayed using a more subdued palette: 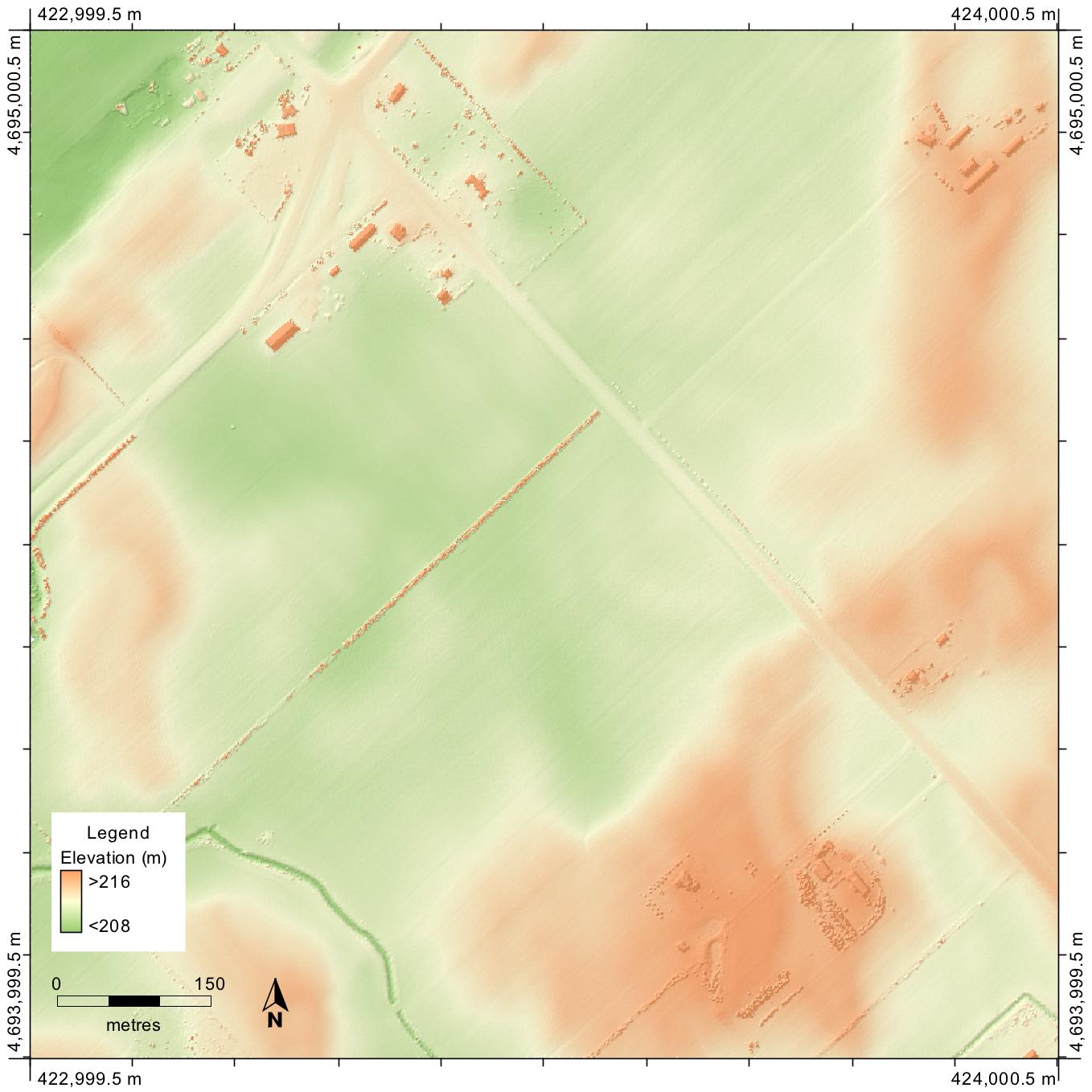 So there you go. It's a very long answer to a very complex question. I hope it helps out.

For a DEM, I would expect regular interval (similar to what you get with contour lines). Therefore, I would recommend a linear stretch.

Maybe you could just increase the contrast in the area where you have the most data by sacrifying the contrast for the very few very high pixels (summits). So putting your line from the bottom left (0,0) to (6,8) counting the lines and columns of your graph should still be OK (like contour lines replaced by points at the summits on topographic maps).

Not the answer you're looking for? Browse other questions tagged arcgis-desktop raster arcmap symbology or ask your own question.

54
Choosing colour-ramp to use for elevation?
3
What effect does standard deviation have on the display of DEM rasters?