I have a text file that I am trying to bring into ArcMap to convert to a shapefile. I am familiar with the process of bringing in the text file and then using the "Display XY Data" tool and exporting to a shapefile.

I can't see any difference between the rows that appear and the row that apparently contains a bad value. I was hoping that someone could help me find the "bad value" so that my table will import in its entirety.

Here is a screenshot showing my original text file and the rows that display in ArcMap: 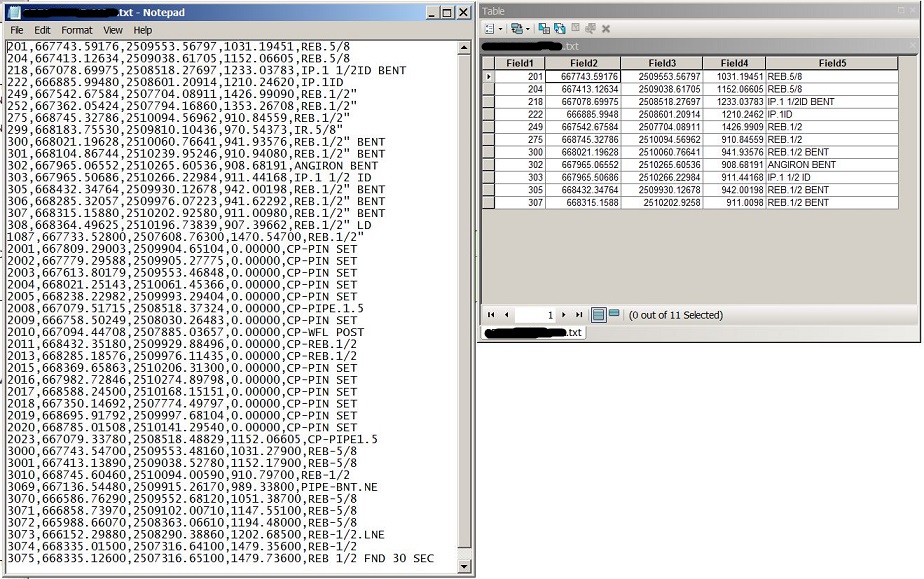 It has to do with the " representing inches, but interpreted as a quotation surrounding a string. The clue is in the records it imported. It did not import the records with ID numbers 252, 299, 301 and 306. Why, because these records are enclosed between quotation marks on the end of the line above them and at or toward the end of them. Line 249 is the first line with a quotation mark at the end, which is why it first affects record 252. Those records that did not come in all actually are within Field 5, but hidden due to the return character of the row above them being included in the string, so that Field 5 contain 2 lines (one visible the other hidden).

The line containing ID 1087 fails, because it is the next line that ends with a quote that would begin a string value, but the lines below it have no end quote to make the string stop. So it fails, because the string it builds is more than the 255 characters allowed in Field 5.

For ArcGIS to work with multiple data types, certain characters in field or table names are not supported. These characters include spaces, hyphens, such as in the term 'x-coord', brackets, and other special characters. These limits are imposed so that ArcGIS is able to function with the maximum amount of data types.

Not the answer you're looking for? Browse other questions tagged arcgis-desktop arcgis-10.2 or ask your own question.

11
Forcing ArcMap to recognize text field in CSV file
1
How to batch process .txt files with X,Y data (in Arc or QGIS)?
2
Esri File Geodatabase The parameter is (or has) the wrong kind of geometry
3
Writing to a text file from arcpy.ListFields()
4
Joining multible rows in csv file to a single row in shp file using ArcGIS
2
Why can't I create a feature class in ArcCatalog when using a .MDB file?
1
Field Calculator Expression Assistance - Return Value Based on a Text String in Another Field
4
Forcing ArcMap to Ignore Double Quotation Mark In CSV Text Field When Exporting to Shapefile?