Save map in raster format from QGIS using compression

Is there a method to save a map in raster format from QGIS using compression?

For exemple from "Export map" in ArcGIS there are many options to compress the images depending on the file type (tiff, jpg, etc.).

I would not normally jump in when a question has effectively been answered in the comments but it seems some confusion has crept in.

If you want to export your raster as is but with compression there are lots of ways of doing it but Project->Save as Image is NOT one of them. This takes a georeferenced snapshot of the current data view, which can be useful but is not what you want (based on the question title). It will save as JPEG, which is a compressed format, but there is no control over the level of compression. Likewise you can save a map from the composer as a JPEG, but, apart from resolution, there is no control over the compression level.

To compress a raster, you can tell QGIS to use compression in almost any of dialogs generating raster outputs. The "Save as" option mentioned in Chris W's comment is one such. Right-click on the raster layer to get a pop-up menu. The Save as dialog looks as follows: 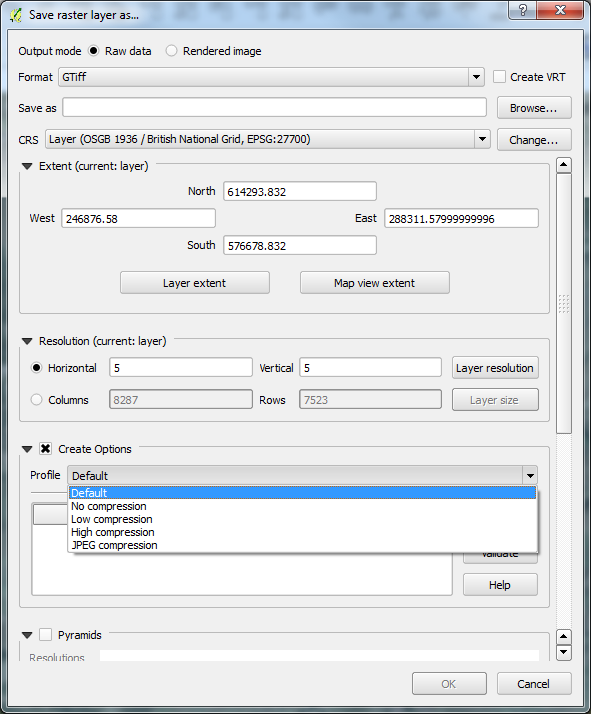 You can find similar creation options in many raster-related dialog boxes (e.g. Raster->Conversion->Translate which would be another route to do this same thing). Have a look here for some of the other creation options you can specify. Note, QGIS should detect the current extent and resolution etc of your raster automatically, so you can just leave those options alone (unless you want to also change the file size by down-sampling the data of course).

Even where you don't have a handy button for a function like compression, if you see a little yellow pencil icon next to the box showing the GDAL commandline, then you can edit the command and (where GDAL allows it) add creation options with the -co flag. Below is an example of editing the GDAL commandline to include compression for Raster->Projection->Warp. You will need to look up the documentation on what these are in each case but for look here for gdalwarp. There are loads of other options besides the -co flag and getting to know the GDAL commands will make QGIS dialogs even more powerful because editing the commandline in this way gives you a lot of extra functionality and control beyond the standard default options available in the dialog box. 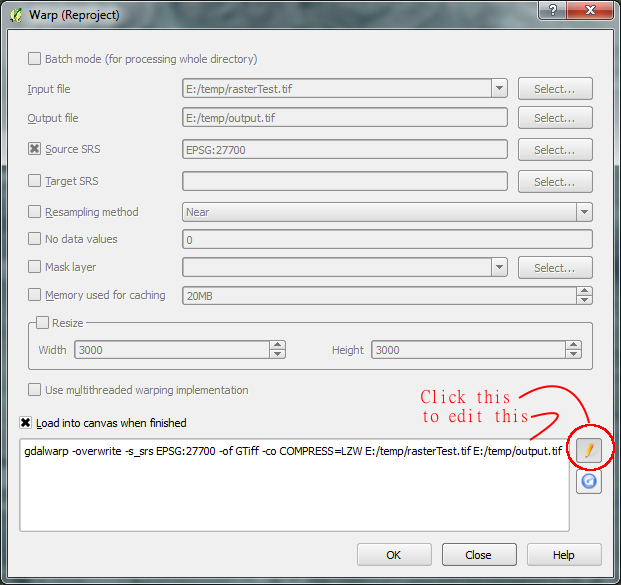 Not the answer you're looking for? Browse other questions tagged raster vector export qgis-2 compression or ask your own question.

2
How to apply compression (e.g. LZW) when exporting a map from QGIS composer to TIF?

8
How to convert a vector boundary to a raster map?
3
Optimal ArcGIS PDF export compression settings for raster topographic basemaps
2
How to remove compression from jpeg2000 NAIP imagery?
1
Transfer feature details from WMS to raster file