In my database, I have one field, Service_Day, formatted as numeric, which contains a single digit number 1 through 7 (for days of week). I want to compare it against another field, called Region, formatted as Text/String which also contains a single alphanumeric character 1 through 7 (again representing days of the week). It seems that I should be able to query the records where "Service_Day" <> "Region", by using the proper syntax. I thought AsString or AsNumber or Convert might be appropriate, but can't figure it out. Any ideas, other than creating a new field and formatting it as either text or numeric and then copying whichever data to that field?

The answer to your question depends on the database you are working with. For File Geodatabase feature classes and tables you can use the Cast operator. For example, this will work in a File Geodatabase:

You can also convert a numeric value to a string and compare it:

Converting to a string is often most useful when used in combination with the SUBSTRING function:

(Not a particularly great real life example, but the syntax works).

Nothing I have tried works for Shapefiles.

A lot of VBscript functions work in SQL.. for example CDbl but such commands are for the more modern databases like Microsoft Jet (Access format), Esri fGDB and enterprise databases like Oracle, SQL Server and PostgreSQL.

Shapefiles rely on long outdated DBase IV commands which can be really difficult to get help on. This is because queries are passed on to the database driver, but even shapefiles seem to have a subset of this SQL... Arccording to documentation VAL(TEXT) should make it into a number, STR( [, [, [, ]]]) should convert numbers to text but that doesn't work.

As a workaround try adding a numeric field and calculate the values, then when converted to a number you can use the values in SQL.

If your text contains invalid characters or is empty then you'll have problems with a straight translation, a simple try/except should step over that: 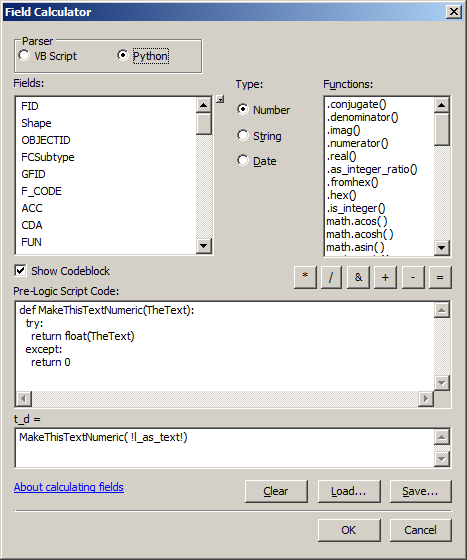 Not the answer you're looking for? Browse other questions tagged arcgis-desktop python arcgis-10.2 sql or ask your own question.

4
How to query against time using ArcGIS Desktop?
3
Generate end points from a layer that contains multiple lines
0
Field calculator to copy numeric values from other fields
3
Python labeling expression using numeric field not working
4
Populating string field based on numeric value from numeric field in ArcGIS Field Calculator?
2
SQL / Select by Attributes query for "does not include text found in another specified field"
6
Creating 1 hectare Polygons given latitude longitude in Python
0
ArcMap calculate field based on conditional statements for other fields